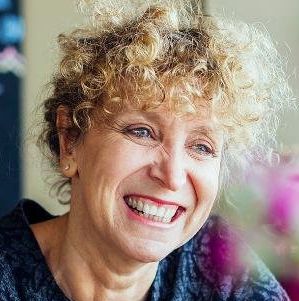 A bullet hole was traced onto Hadas Gold’s blood-spattered forehead. The photo in the news article showed an accompanying message: ‘Don’t mess with our boy Trump, or you’ll be first in line for the camp. Aliyah, or line up by the wall, your choice.’ The young Jewish journalist’s image had been photo-shopped to look like she was wearing a yellow star with the word Jude (Jew) emblazoned on it, the sort of identification badge my mother was forced to wear in the Lodz ghetto by the Nazis.

My mother’s teen years were devoured by war. Twenty-one years old when she was liberated from the brutal concentration camp of Bergen-Belsen — her entire family tree burnt to a stump – she never imagined that the personal taunts and blind hatred of ordinary people, her neighbors and classmates, might escalate into collective and institutionalized racism and eventually lead to the horrific events of the Holocaust. That recent image of a female Jewish journalist, coming so soon after white supremacists placed parentheses around the names of Jews online, and Donald Trump posted an image of Hilary Clinton’s face beside a six-pointed star, superimposed on the background of dollar bills, hurtles society into an eerie arena. This outpouring of bile evokes shadows of the fear my parents were subjected to growing up in pre-war Europe.

The undercurrent of Trump’s campaign is to “make America great again” if you are white, Christian, and born there. As the daughter of Holocaust survivors, I fear for this future land that venerates conformity rather than difference. When you grow up ravaged with the knowledge that there was an attempt to annihilate the people you love most, that notion of hatred stays in your bones. Whether you are from America or elsewhere (I’m Australian), the idea that the leaders of a superpower embrace ideologies that revolve around blaming those deemed as ‘other’, is particularly frightening. The only way to combat this evil is to rise above it and strive for a reality where empathy and love reigns over hate.

We are witnessing an escalation of people spewing outrageous, unedited and dangerous vitriol into the world, fueled by politicians who take advantage of an atmosphere of fear. I grew up with the avowal ‘never again’ imprinted on my psyche. I am fearful that if the blind racism my parents experienced repeats itself, we will once again find ourselves living in a culture steeped in intolerance and mistrust. What is truly terrifying is that we never seem to learn from the past – have we come so far only to witness a resurgence of the same old bigotry my parents experienced decades ago?

My mother fled a battle-scarred Europe in 1949, traveling to Australia on a refugee visa, determined to bring her children up in a country safe from the ravages of tyranny and hatred – “I ran as far away as possible”. My father was lucky enough to escape in 1938, leaving behind all the people he loved, the majority of who ended up being murdered for the simple fact that they were Jews. My parents worked hard as migrants in their new homeland, sending me to a private Christian girls’ school, where I learned the Lord’s Prayer and was versed in the scriptures of the New Testament. My parents hovered in the background, encouraging me to blend in – “just in case”. I always wondered what they meant by that phrase, growing up in the apparent sanctuary of a peaceful, suburban existence. Those who have experienced persecution often remain silent, crippled by concerns of any backlash. Even though I never encountered any overt racism, I still followed my mother’s advice to avoid hot topics or heated discussions about anything to do with my being Jewish.

Seeing that image of Hadas Gold recently, along with the hateful bile that poured out on the internet in response, awakens my worst nightmares. America, you are not alone in being afraid of what will happen in this Presidential election; I live way over the other side of the pond, but the outcome matters to me and to people around the world. We will be just as anxious as you on November 8th.

Writing these words, I too feel scared, in the same way I feared writing about the terrible impact of war and terror on subsequent generations in my novel, The Waiting Room.

It follows Dina, the daughter of Holocaust survivors, on the day of a terror threat in her adopted city of Haifa. As she confronts her parent’s history, underpinning her day-to-day existence defined by conflict and trauma, she has to decide if she will surrender to fear, or fight for love and compassion.

It’s time to replace prejudice and ignorance with core values of human kindness and empathy, no matter where we live. Yes, my parents endured so much to ensure their children would grow up free of the horrific impact of virulent racism and persecution, trying to protect us by urging us to keep a low profile as Jews. But silence is no longer an option – there is too much at stake if hatred becomes the most pervasive force in our society. Speaking out against injustice, in all its forms, is the responsibility of each and every one of us.

Leah Kaminsky is a writer and editor who has won numerous awards, grants, and fellowships throughout her three-decades-long career. Her newest book, The Waiting Room (Harper Perennial, 2016), will be published in November, and was short-listed in the Voss Literary Prize.

Leah Kaminsky won the prestigious Voss Literary Prize for her debut novel, The Waiting Room (Vintage 2015, Harper Perennial US 2016). Other books include ‘We’re all Going to Die’ (Harper Collins, 2016), ‘Writer MD’ (Knopf US), and she co-authored ‘Cracking the Code’ (Vintage 2015). She holds an MFA in fiction from the Vermont College of Fine Arts.