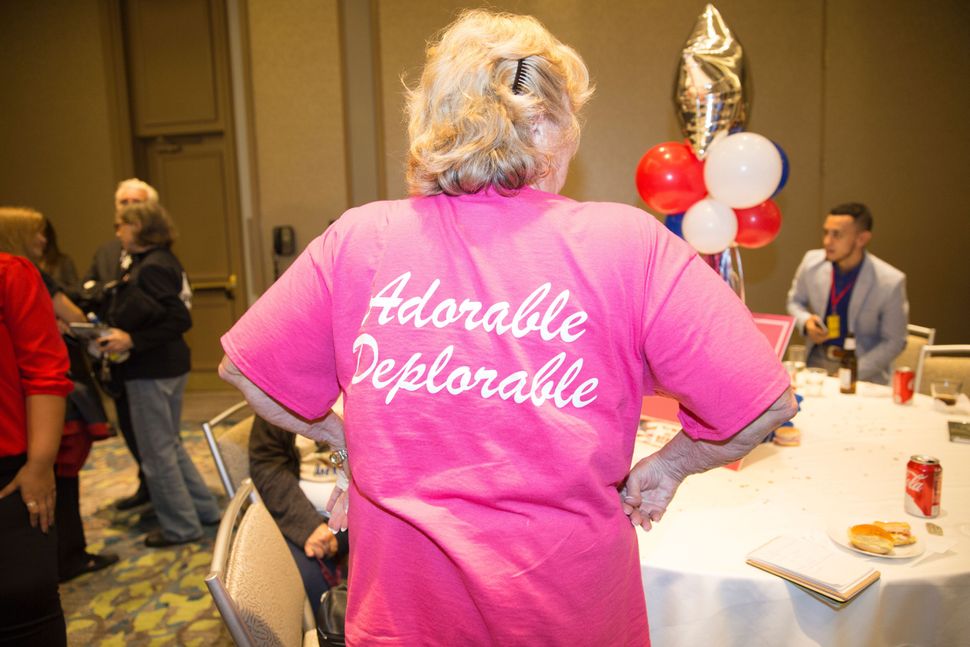 White women, what’s up with you/us? Image by Getty Images

With news emerging that white women preferred Donald Trump to Hillary Clinton, it’s tempting, if you’re a white woman horrified at what’s just happened, to start on a reckoning, or whatever one wishes to call that social-media self-flagellation that so many of us turn to when things seem horrible and we feel helpless at fixing them, as well as responsible, if indirectly, for the horribleness.

But when I see “white women” posts from white Jewish women, I pause. Are we white women? Today? That is, are we complicit in what’s just happened?

One way to look at this (an imperfect way, as I’ll get to in a moment) is demographically: Jews voted 71% for Clinton, 24% for Trump, and that’s Jews of all genders. Given that across racial lines, Trump had a relative edge with male voters, it seems rather unlikely that more than a handful of Jewish women voted for him. Except… one could say the same about a whole bunch of carefully-selected segments of America’s white female population! Plenty of white people live in Clinton-favoring bubbles; to cite one’s membership in such a bubble, and then be all, it wasn’t my fault!, seems an abdication of responsibility. A #NotAllWhiteWomen move.

In the case of white Jewish women, I’m not so sure. We’re not just some random sub-demographic that had qualms about Trump. This was a candidate with a KKK seal of approval!

I suppose I’d find it reassuring, living in this racist (more racist than many but not all had imagined) society, comforting, even, to think that yes, I’m facing these election results As A White Woman, and for my experience to be one of white guilt. Sure, Trump’s bad news for women generally, but extra-disastrous for women of color. And if Clinton had won (I can’t believe I’m typing this, this “if”), the whole thing would feel a bit academic. Oh, sure, there was that blip where white supremacists dipped into the mainstream, but of course Jews like me are white in America, and oh, how hyperbolic and victim-mantle-claiming of me to have even for a moment contemplated any other possibility. Privilege self-flagellation is uncomfortable, but there’s this aspect of it that confirms something calming: that in whichever arena one is privileged.

Instead, Trump appears to have won this thing, and I’m scared. As a woman, as a Jew, as a Jewish woman. And I’m not alone in this:

Canada jokes aren’t just about privilege. For those of us w/ inherited Holocaust trauma the idea of escape is extremely important.

Whiteness is… a whole bunch of things, and my skin’s as pale today as it was yesterday. The unearned benefits of having been categorized as white, in America, for most of my life, are unlikely to vanish instantaneously. But politicized whiteness, in 2016, is the blithe sense that Trump’s America wouldn’t turn its racist hatreds on your kind. Which, no, I don’t get to be blithe about this.