Women of the Wall Fight Sexism With a Smuggled Menorah 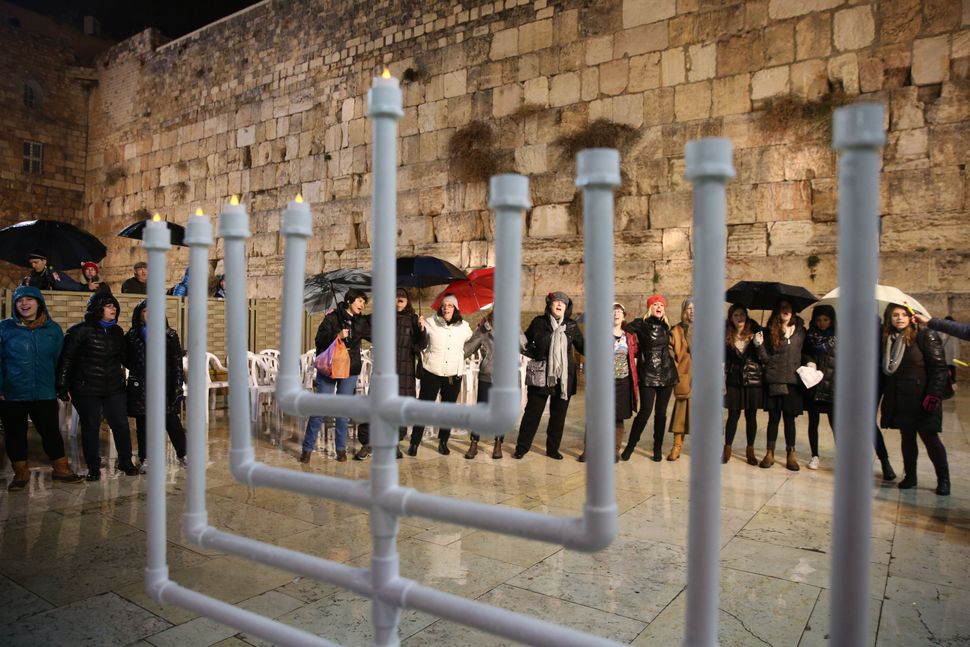 Credit: Miri Tzakh/Women of the Wall

A few weeks ago I ventured out into the cold, trudged over to my nearest Home Depot and bought enough PVC to redo an entire bathroom.

My bathroom is just fine, thanks. So why did I do it? The truth is, the rabbis made me do it.

Let me explain. Hanukkah, the festival of lights, started last week. Jews celebrate by lighting a candle each night to commemorate the miracle that sustained us in our ancient battle against foreign and destructive forces.

Hanukkah is, historically, the celebration of our victory in remaining Jewish.

Israel’s rabbis have chosen to commemorate this moment in two ways: First, by holding a men-only candle-lighting in the men’s section of the Western Wall, to which male members of the Knesset were invited in flagrant violation of all the laws that guarantee freedom of worship and equality at all public events in Israel.

And, secondly, by denying Women of the Wall (WOW,) an organization I have admired for close to thirty years, the right to bring in their own menorah.

So I set out on a winter adventure with the aim of creating a menorah that would be illuminating, beautiful and stealthy. My sisters in Jerusalem had to be able to smuggle it past the metal detectors that lead into the Western Wall Plaza.

I built it because, living in New York, I am unable to accompany them to the Wall, but I hoped my menorah would make the journey for me and represent the many American Jews who believe in gender equality as I do.

So building this menorah was a moment of hope and joy in my life. It also caused me, for the first time in my life, to feel ashamed that I am Jewish.

After going through all of the machinations necessary to ensure that it could get past the security machines that, instead of protecting worshipers, operate to deny women their basic rights, I showed the menorah to Anat Hoffman, my friend and the chair of Women of the Wall. Her reaction shocked me. She looked at the precisely designed pieces of PVC piping and fretted that they could be pulled apart by ultra-Orthodox protesters and be used to hit the women trying light Hanukkah candles.

I was floored. I am ashamed that my Jewish brethren could stoop so low as to do that. This was, for me, a moment of real awakening. In both senses of the word it was a WOW moment.

Among other reasons, Women of the Wall is a supremely important organization because it is fighting to maintain Israel as the Jewish State was supposed to be: a nation of freedom and equality for all.

As a Jewish-American woman, Israel matters to me politically, spiritually and in terms of the safety of the Jewish people. I have felt this way since I first travelled to Israel in 1959, barely a decade into the state’s existence, and all along I have been very proud of Israel’s values. I still consider Israel to be an inclusive nation in which people of all ethnic and racial backgrounds, all Jewish streams, all nationalities, all sexualities, are treated equally. I include in this, in fact I take for granted, the equality of women and men.

This is the reason I cannot fathom how it has come to this: a state-subsidized rabbi declaring that women cannot pray freely at the Western Wall and brave Jewish women afraid of being beaten and spat upon if they have the “temerity” to pray. How can it have come about that any group of people has been singled out as lesser when it comes to such a holy place?

The Israel that I feel so deeply connected to, that I believe most American Jews relate to, is a nation open to all its people: — Jew and Muslim, Christian and Druze, man and women — in which each is entitled to be free and equal. It was to safeguard this nation that I love that I went out to buy PVC.

Judy Sarna is the author of the recently published book, “Designing My Life,” based on her eclectic fashion, jewelry, and carpet design career in Afghanistan and India. A social entrepreneur, Ms. Sarna served as president of the Abraham Fund and is currently on the board of the Alan B. Slifka Foundation. She is married to Morris Sarna, a businessman and Holocaust survivor.

Women of the Wall Fight Sexism With a Smuggled Menorah