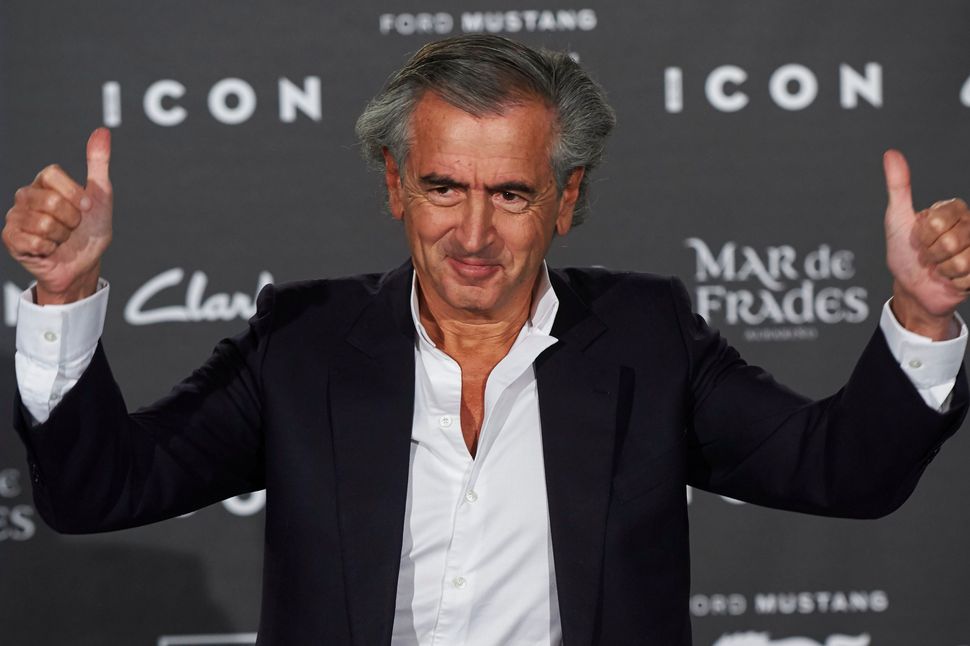 As I was perusing the New York Times book reviews this weekend (yes, the section whose cover features a review by Woody Allen), I happened upon an interview with French-Jewish writer and public intellectual Bernard-Henri Lévy. As someone with an above-average interest in French and Jewish (I’ve got a doctorate in just that topic, and have subjected undergrads to my thoughts about the Dreyfus Affair), and long familiar with BHL in particular, I dove in. And I tried to focus, really I did, but I got distracted. In the print edition, I counted 11 writers named (not including BHL himself, who also gets a friendly shout-out) and… all dudes. Some but oh, not all, from eras where uniform dude-ness might be expected. In cases where the name was ambiguous and not one I was familiar with, I Googled to check and… yup. Dudes. The extended online version of this interview does mention one woman writer: Lévy’s daughter. As far as I can tell, only one other writer also noticed this.

I get it. I get that call-outs of otherwise reasonable (or reasonable-ish) thinkers for likely unconscious missteps are, if not What Caused Trump, a distraction from the big issues like, well, Trump. I also don’t see much to be gained by shaming BHL, who after all said what popped into his mind, and is not necessarily any more ill-intentioned in his omission of women writers than I was when, assembling lists for my grad school exams, it took professors pointing this out for me to include more female authors, despite being a woman and a feminist. The problem isn’t BHL personally.

And yet, much as I wanted to focus on the content of the interview, the tremendous list of dudes distracted me. Especially when I got to this bit:

“What moves you most in a work of literature?

The inducement of a feeling, a shiver, a way of viewing or assessing the world of which I had previously been wholly unaware. That is the sole attraction of literature for me: to add something to the world and to my idea of it; to explore other ways of existing.”

Maybe, if you’re a man, this might make you think to… never mind.

What, then, do we do with this? What, if we are not able to resort to a silent ugh, is the takeaway here?

-The oft-discussed hope or theory or whatever it is, that men with ambitions for their daughters will be the road out of sexism, is bunk.

-The interview with Lévy is a sweeping discussion of Greatness. Of literary Genius. And a big part of sexism, impacting even the women who Have It All TM, is the (generally implicit) belief that Greatness is a trait that can only be possessed by men.

-Before full-on scrapping “elite” feminism, let’s consider instead fixing it. That is, let’s address systemic injustices, such as the racism and classism in who gets to be “elite”, and a society with a wealth distribution that means only “elites” have a decent standard of living. Let’s have a feminism that doesn’t restrict itself to glass-ceiling concerns. But let’s accept that even in a perfectly just society, there will be leaders, great artists, Greatness. And let’s not let men (or women!) go on thinking maleness is a prerequisite for noteworthy achievement.

-Statement-of-fact counting, such as VIDA, works.