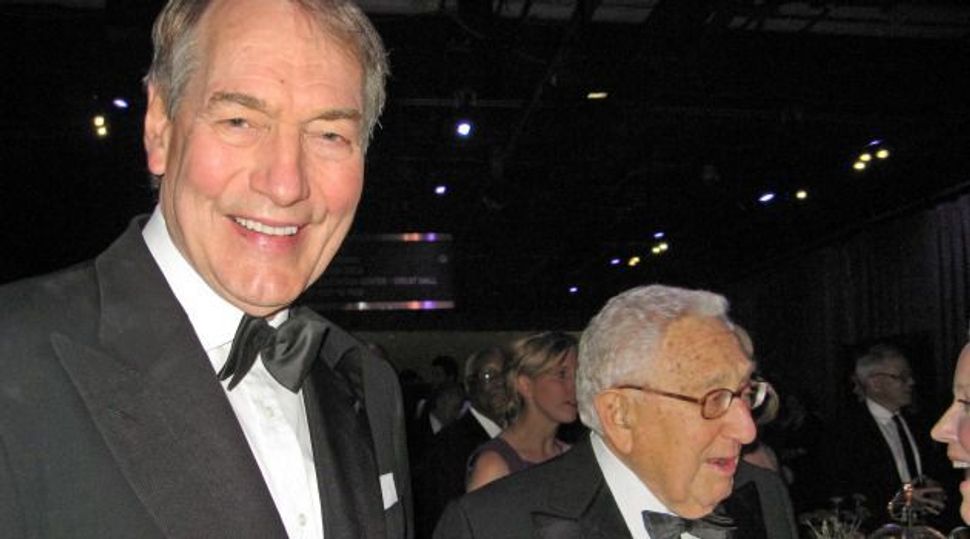 In advance of the anticipated arrival in New York in 2015 of the “Freedom Frigate” Hermione-Lafayette — Friends of Hermione-Lafayette in America celebrated its Inaugural October Gala aboard the USS Intrepid Air & Space Museum. Moet Hennessy flowed and a leggy beauty dispensed teaspoonfuls of Petrossian caviar to the black tie guests — six hundred strong from across the globe.

Presented by FOH-LA President Miles Young the first recipient of the Friends of Hermione-Lafayette in America Leadership award was Dr. Henry Kissinger.

The award is in honor of the French frigate which sailed from Rochefort on March 21, 1780 arriving in Boston with a contingent of French reinforcements who joined General Washington and fought in the American campaign for eighteen months until victory.

Following the award presentation, French philosopher and author of “American Vertigo: Traveling America in the Footsteps of de Tocqueville” Bernard-Henri Levy — dashing in his signature chemise empassee (an unbuttoned blinding white shirt) — declared: “Charlie Rose, one of my dearest friends, is to us French people “a table.” Citing “famous tables” of history such as the Tabula Rasa of Francis Bacon and Descartes, …the Last Supper… the Table of the Oval Office…the table of the Card Player of Cezanne and today there is the ‘Table of Charlie Rose’ [for he] he invented the world table. [He is] the reinventor of an art which for a long time was considered a French art — the art of conversation. He is the master of what Hannah Arendt called the world of ideas…an agent of resistance to noise, silence and twitter.” From where I sat I was sure I saw Charlie Rose blushing.

“What this evening is about,” responded Rose, “is America’s oldest friends: France and Lafayette.” He touted Lafayette’s “love for America,” which “caused a young man to come here and identify with a young nation…and it made all the difference and that is what we are celebrating this evening…. [And] for me to be mentioned in the same breath, as Henry Kissinger is a deep honor. As all of you may know, he is the one person I have interviewed more than anyone else. Period! He has the longest number of hours at what Bernard called ‘the table.’” Rose noted, “Henry’s sense of appreciation of what immigrants have brought to this country is amazing!”

Rose then proceeded to do an on-stage “table” interview with Madame Christine Lagarde, Managing Director of the International Monetary Fund, who diplomatically fielded Rose’s queries vis a vis major international political, and economic issues. The menu, inspired by the cuisine of Poitou–Charentes whence “The Hermione” sailed for America, was curated by Ariane Daguin, CEO of “D’Artagnan” and included the classic Poulet Grand Mere (Grandmother’s chicken!).