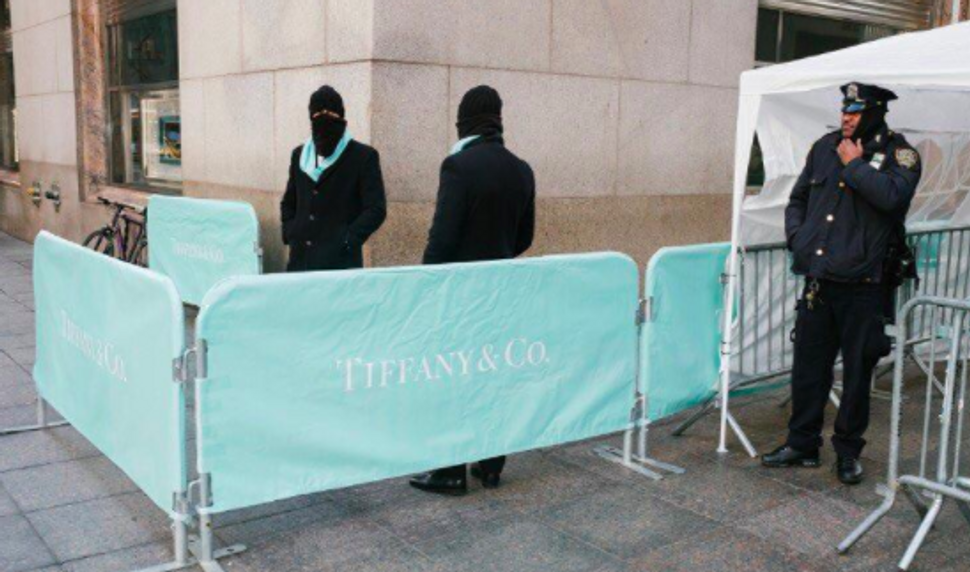 Branded barricades near the Trump building in midtown Manhattan. Image by Screenshot/Twitter

What does “Tiffany” mean to you? Is it a place to breakfast with Audrey Hepburn? Or does it evoke the plight of the younger Trump daughter?

There’s yet another meaning to the brand, which Joanna Rothkopf lays out at Jezebel: upscale bat mitzvah gift bracelets. First, Chavie Lieber had tweeted the following:

OK, I’M SORRY BUT THE NEWEST VERSION OF THE TIFFANY BRACELET IS LIKE A BAT MITZVAH PRESENT ON COCAINE pic.twitter.com/iyV1lwsLKk

In a post inspired by Lieber’s tweet, Rothkopf then describes “the iconic heart tag charm bracelet, given to the richest of 13-year-old suburban brunettes,” which may get at why I, a city kid, went to bat mitzvahs aplenty, some quite fancy, but don’t remember those bracelets catching on.

(My fondest memory from that period was getting invited, via a female friend, to a bar mitzvah because they wanted there to be some girls, and I guess he was at an all-boys school. It was at the Pierre hotel, which I don’t believe I’ve had occasion to enter since. I danced with a cute boy and ate huge chunks from this enormous block of Parmigiano cheese that was just part of what has to have been the most lavish food spread ever. I remember the cheese more vividly than the boy.)

Anyway. In a post called “Give Me This Tiffany & Co. Bracelet So I Can Become Queen of the Bat Mitzvah Girls”, Rothkopf flags a new version of the bracelet, which involves a whole lot of heart charms. Her visceral reaction to the bracelet is worth a read.