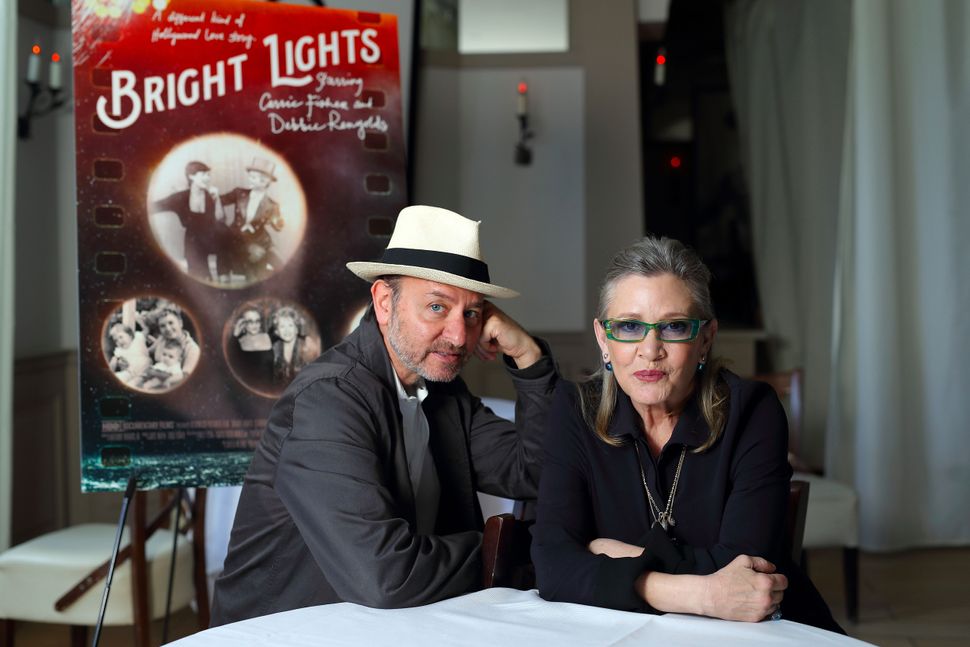 Fisher Stevens, co-director of Bright Lights, with the late Carrie Fisher, May 2016. Image by Getty Images

Six months ago, I wrote an open letter to Carrie Fisher, for the Sisterhood, asking Fisher and her mother Debbie Reynolds to Mother’s Day lunch with me and my mother at Steven Spielberg’s mother’s restaurant on Los Angeles’s Pico Boulevard. The abruptness of their deaths was a shock. “It’s a tragedy,” my own still vibrant, 80-something mother said.

Yet I found comfort and even delight in watching these two stars perform their roles as mother and daughter in HBO documentary Bright Lights, which was originally scheduled to be aired in the spring, but was instead moved up to this past Saturday.These two fragile, flawed yet strong icons may have had their problems with each other and with life, but they were also funny. “Just do what your mother says, it’s easier,” Debbie tells her daughter, with tongue firmly in cheek, while also advising Carrie, who was bending over a suitcase, not to turn her back to the camera. And Carrie’s shoot-from-the-lip wit lights up many scenes throughout the film, even when talking about her bipolar disorder. “It would be cool to get to the end of my personality and just lie in the sun,” she tells a manicurist. She also manages to work “bipolar” into a song, “I’ll Never Say No to You,” which she agreed to sing during Debbie’s last show, in Vegas.

To me, one of the surprises of the film was that Carrie was a better singer than her MGM That’s Entertainment mother. And that Debbie was envious. “Isn’t that a great voice? “I wish I had that voice,” she tells an interviewer, after 15-year-old Carrie performs a rich, dusky version of “Bridge Over Troubled Water” (perhaps presaging her sometimes troubled relationship with the song’s composer, Paul Simon).

It’s one of many poignant moments in the film, along with Debbie tearing up as she talks about her daughter’s mental illness. “We didn’t know about it. There was a constant pressure to assure her she [was] loved.” Another is when Carrie, worried about her elderly mother’s health as she prepares for last performance gig, tells her “I worry about how much this will cost you,” but also knowing that she is powerless to stop her. “Performing gives her life.” Carrie says in the film. “It gives her what a family cannot.”

Family deficiencies and the need to perform are equal threads in this mother-daughter narrative, which begins with Debbie’s compulsion to do one last show, at the age of 83, and ends with Carrie introducing her mother as the recipient of a Lifetime Achievement Award from the Screen Actors Guild. In between, we see snippets from 1950s home movies showing Carrie and her brother Todd in various stages of development, but without seeing the effects on these children of having a physically and morally absent father, a terrible stepfather, and a movie star mother who needed to keep her sunny side up at all times. “We didn’t grow up with each other. We grew up around each other. It was a prototype life,” says Carrie in a voiceover.

The film weaves past and present almost seamlessly, intercutting the home movies, family photos, Debbie’s attempts to auction off such movie memorabilia as Marilyn Monroe’s subway dress, and Carrie showing off two of her kitschy Rembrandt-like paintings, which she said resembled actors Kevin Spacey and Richard Dreyfuss. We also get to see Debbie in her heyday, with actors such as Gene Kelly and Frank Sinatra, and surrounded by a clutch of hyper-masculine dancers, juxtaposed with Carrie’s scenes with Mark Hamill and Harrison Ford in the first Star Wars.

Back in the present, we see Carrie graciously signing autographs for Princess Leia wannabes at a Star Wars convention. One fan is thrilled with her autograph, saying how Princess Leia “epitomizes a strong woman who speaks her mind.” And Carrie seems, in the film, to have made peace with this persona, which launched her on her own circuitous and hazardous ride through fame. “She is me and I am her,” Carrie says, talking about her fictional alter ego in much the same way that Debbie invokes her similarity to the Unsinkable Molly Brown. “If you feel sorry for yourself and let yourself go down, you drown,” Debbie says as she tools through a Vegas hotel lobby in a Medicare scooter.

Throughout Bright Lights, the push-pull interactions between Carrie and Debbie may be designed for the camera, but they also seem honest and even sometimes like a regular mother and daughter, such as when they argue over Debbie using a flip phone. “It’s ridiculous,” Carrie chides. And its moments like these that keep the film from getting too dark, as do those depicting the love between the two main characters. What I also found not only comforting but also admirable was how a physically and psychically damaged daughter seemed to have reconciled with a mother who had once been on a pedestal but now was firmly at eye level and subject to the diminishment of aging. “Age is horrible for any of us, but she falls from a greater height,” Carrie said.

In one of Bright Lights’ first scenes, we see Carrie trudging over to her mother’s house, saying “Mother and I live next door to each other, separated by one daunting hill. I come to her. I always come to her.” But in the end, it was Debbie who came to Carrie, leaving Earth shortly after her Princess-Leia daughter did. This knowledge and “In Memoriam” dedications at the beginning and end of Bright Lights lend the film a lingering sweetness and pathos, as does Debbie’s motherly reassurance to Carrie at the end of the film: “You know I love you,” she says.