President Obama’s Farewell Speech Made the Best of Strange Circumstances 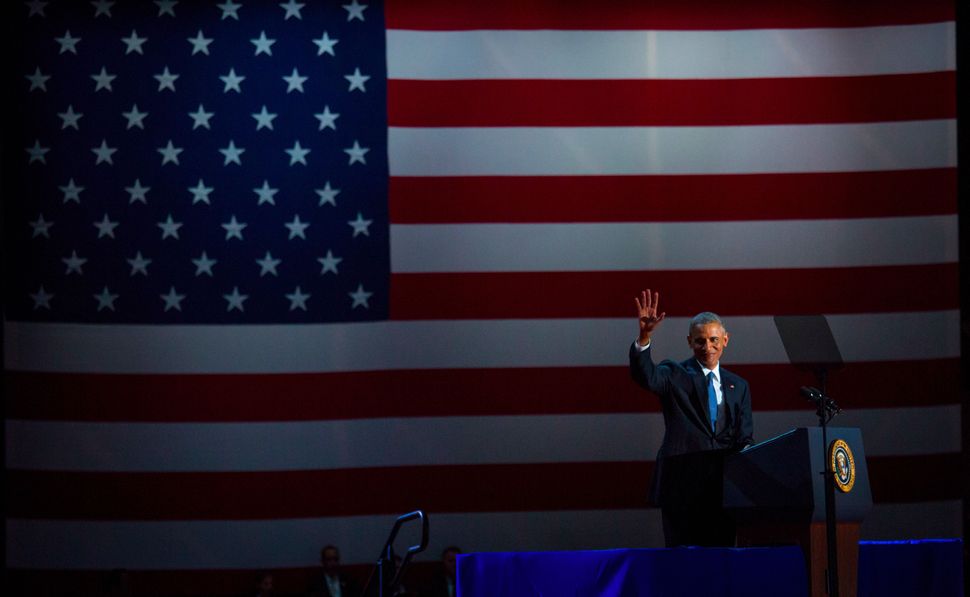 It began, as evenings usually do, with a downpour (sorry) of pee jokes on Twitter. By the time I’d just about sorted out the background (a dubious source; Russia; the president-elect mixing hatred of his predecessor and a predilection), President Obama was about to give his farewell speech. And so my Twitter feed went from photos of a literal golden shower in Trump Tower, and the inevitable discussions of whether it’s OK to kink-shame Trump (and if Dan Savage gives the go-ahead, who are we to say no?) to a moment that would have had dignity written all over it regardless, but in the context, oh boy.

It was tough, then, to focus on the content of the speech itself. The subtext was overpowering. It felt like the end not merely of a great (if flawed, but aren’t they all?) presidency, but maybe that of American democracy as well.

As it stands, the Democrats have an edge of sorts for grand political speeches, which is that they’ve got the patriotism upper hand these days. Obama was thus able to push back against Trumpism simply by offering a positive case for American goodness and Enlightenment values. Which he did, brilliantly, as one would expect. His speech accomplished really all that it might have, which is to say, it confirmed how much he’s likely to be missed.

That said — and this is a quibble I can’t decide if I should or shouldn’t qualify as “small” — I did not notice a ton in the president’s speech about feminism. There was just a reference to women’s suffrage (an important achievement but not a recent one) and this bit: “[W]e cannot withdraw from big global fights to expand democracy and human rights and women’s rights and LGBT rights.” There was instead one (applause-winning) line that struck me as… how to put this?… not gender-neutrally applicable: “If you’re tired of arguing with strangers on the Internet, try talking with one of them in real life.”

I got that Obama was just offering a truism about online debates getting unpleasant, and that he wasn’t literally suggesting meeting the same strangers in person. But for women, whose online “arguing” often consists of getting harassed by trolls, the prospect of offering strangers even more time and attention, and in person at that, is terrifying. And even without the online angle, suggestions to chat with strangers in person are… I mean, this is an option many women, young women especially, steer clear of and with good reason.

The near-omission of feminist concerns was not surprising – while internal discussions among feminists can get pretty intense, feminism itself has lost its spot in The Narrative. Centered instead is the proverbial resentful white dude. It’s hardly Obama’s fault that that’s the case. And at first, I was with him on how to address this:

“If every economic issue is framed as a struggle between a hardworking white middle class and an undeserving minority, then workers of all shades are going to be left fighting for scraps while the wealthy withdraw further into their private enclaves.”

Then, alas, came the bit where he began his “pay attention and listen” message with a request that the actually oppressed stop and consider the pain of those suffering from imagined plights:

“For blacks and other minority groups, that means tying our own very real struggles for justice to the challenges that a lot of people in this country face. Not only the refugee or the immigrant or the rural poor or the transgender American, but also the middle-aged white guy who from the outside may seem like he’s got all the advantages, but has seen his world upended by economic, and cultural, and technological change.”

If the president had drawn an equivalence between the “struggles” of “minority groups” to white poverty, that would be one questionable but understandable thing. Instead he asked for have-nots to sympathize with haves. And… if his point had been that as individuals, plenty of middle-aged white guys have tragedy in their lives, I’d have agreed with him. Sometimes conversations about systemic injustice have a way of erasing the pain that can come from idiosyncratic injustice (and that by no means only or especially impacts white men). But that was not his point. Obama was treating the complaints of the proverbial middle-class (or wealthy!) white male Trump supporter as a form of systemic injustice in its own right, which, no.

The only part of the speech that really struck me As A Jew was this:

“Now I’ve lived long enough to know that race relations are better than they were 10 or 20 or 30 years ago, no matter what some folks say.”

The recent resurgence of anti-Semitism is also a thing that happened. That said, if we take the spirit of Obama’s remarks to be a reference to the accomplishments during his presidency, it seems unfair to put any of these very recent developments on him, even indirectly.

I remembered reporting on Obama’s Senate victory in 2004, as a student at the University of Chicago. This was both the only time I saw Obama in person and, for obvious reasons, an event I’d never forget, even if I hadn’t written about it. Obama had the charisma and youthful handsomeness of Justin Trudeau, along with the brilliance of, well, a UChicago professor. I was impressed then, but am that much more so now.

President Obama’s Farewell Speech Made the Best of Strange Circumstances