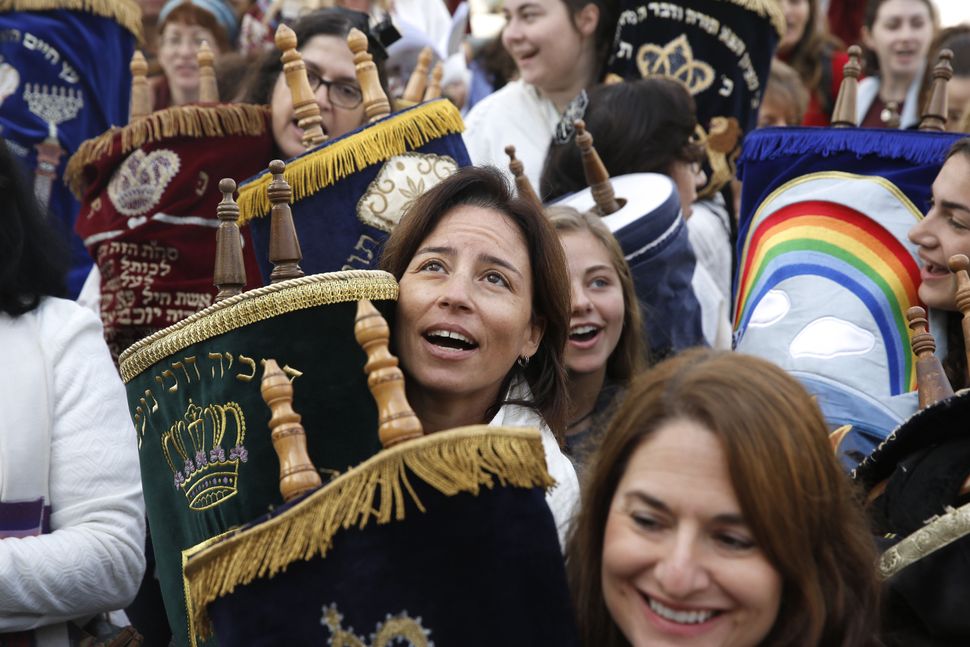 Women of the Wall in November. Image by Getty Images

Rabbi Abraham Joshua Heschel famously made a distinction between sacred space and sacred time. Jews – who for much of history were itinerant, kicked out of one country, and expelled from another – sanctified time, unlike Christians, who sanctified space. Sacred space took a back seat to sacred time and Shabbat, he argued, no matter where in the world we were, became our cathedral in time, because we didn’t have cathedrals. We, as wandering Jews, could pray anywhere; in the desert, on a mountaintop.

Today’s Israeli Supreme Court decision, however, proves otherwise. In a groundbreaking interim injunction the Israeli court ruled that women should be able to read from the Torah in the women’s section of the Western Wall, and that the egalitarian prayer area at nearby Robinson’s arch does not constitute equal access. These rulings fly in the face of longtime Orthodox control over the site – control which has prevented Jewish women from leading and participating fully in all forms of Jewish prayer at the site.

Why does this matter so much? It matters because the Kotel, the Western Wall, is the axis mundi of the Jewish world, the place where Jews, for thousands of years, have believed God to be most present on earth, b’tocham, in our midst. So the fact that, over the past three decades, women have been relegated to smaller and smaller portions of it, (in 1992 the mechitza separating men from women sat smack in the middle of the courtyard, while today it has migrated so that the men’s section takes up nearly 75% of the wall) banned from reading the Torah by it, prevented from wearing tallitot and tfillin at it, and, above all, leading their own prayer services has sent a deafening message about access and authority. The message was: the wall does not actually belong to all Jews. It belongs first and foremost to Jewish men who have the right to worship there as they please and only then does it belong to Jewish women, but with caveats (they can’t read from the Torah at the wall, lead services, or wear tallitot or tefillin).

The Original Women of the Wall (a break-off group from the Women of the Wall) called this ruling “momentous” on Facebook, stating on Facebook that “the Court [has]put the onus on the defendants to justify withholding Jewish women’s rights to full religious expression, rather than asking us to defend that we have them.”

And yet there’s still a long way to go. The Women of the Wall, in petitioning for equal access to the site, argued that “the Kotel is not a synagogue but a ‘national holy site’, that is ‘public space’.” While legally this may hold weight, it is, in lived reality, not actually true. The Kotel, for millions of Jews, is the ultimate, original synagogue, a place for b’nei mitzvah, the culmination of all Jewish pilgrimages, and the place in the Jewish imagination which, more than any other, represents holiness on earth, God’s Presence in our midst. It was always meant to be shared by all Jews, no matter gender, observance, or affiliation. No single group of us has a monopoly on God, Torah, or prayer. To claim otherwise is a rebuke to our shared heritage and it’s fundamental and most beautiful belief that we are all, despite our differences – klal yisrael – the people of Israel, and that we all, no matter what we believe, stood at Sinai and received the Torah together.