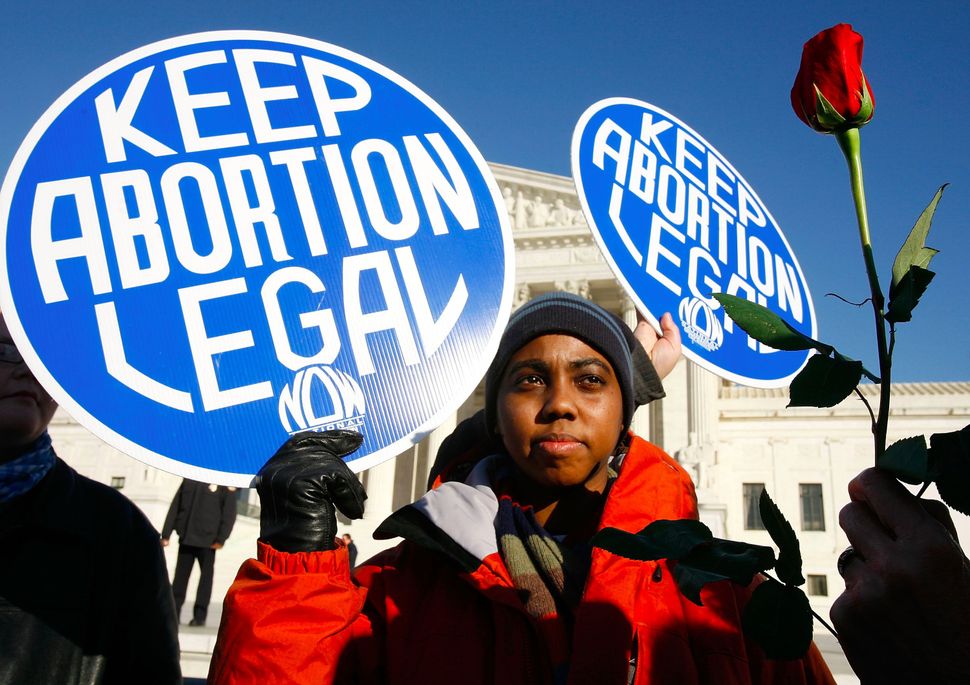 While they were not quite guests of honor, self-identified pro-life feminists were among those marching for women’s rights on Saturday. This Friday in D.C., a March for Life will put anti-abortion activists’ concerns front and center. We might as whether now, with abortion rates at their lowest since Roe v. Wade, is the moment, but as anyone whose fetus days are long behind them knows full well, there are those who think abortion is evil and those who do not, and for those in the former category, fewer abortions is still too many.

A supporter of that March, Frederica Mathewes-Green, has an article in National Review explaining her trajectory from “anti-war, mother-earth, feminist, hippie college student” to… well, to what, exactly? I draw readers’ attention to Mathewes-Green’s article because it’s not the typical anti-abortion screed, or even the typical ‘I was a lefty but then I grew up’ conservative mea culpa. Yes, it includes lines that will make my fellow pro-choice sorts’ heads spin (I’m thinking especially of this: “[I]f nobody wants to have an abortion, why are women doing it, 2,800 times a day?”), along with the usual frustrating claim that “[a]bortion is a horrible and harrowing experience,” which, no, not in all cases, but there are these tantalizing nuggets of, well, feminism that deserve a second look:

Mathewes-Green explains that progressive, pro-peace principles (and, I have trouble not opining, an inaccurate sense of the gore involved in abortion) led her to swing from pro-choice to fetal-rights activism. She was (is?) “anti-war, anti–capital punishment, even vegetarian, and a firm believer that social justice cannot be won at the cost of violence,” and came to find support for abortion inconsistent with those ideals.

Here’s where things get interesting: Addressing her change in views, Mathewes-Green writes that she and other (progressive) activists “expected that abortion would be rare. What we didn’t realize was that, once abortion becomes available, it becomes the most attractive option for everyone around the pregnant woman. If she has an abortion, it’s like the pregnancy never existed. No one is inconvenienced. It doesn’t cause trouble for the father of the baby, or her boss, or the person in charge of her college scholarship. It won’t embarrass her mom and dad.”

This is a powerful point, but not one whose inevitable next step is to urge the reversal of Roe v. Wade. Yes, it’s a problem, one that progressives tend to recognize, that society is structured in such a way as to screw over new mothers. I am — just ask Sisterhood commenters! — a liberal sort, but I, too, raise an eyebrow when various developments (straight women getting encouraged by the culture to invite a second woman — not man — into the bedroom with their husband or boyfriend; corporate-funded egg freezing for healthy women) get heralded as progressive triumphs. I get it: the Sexual Revolution did not bring with it a feminist utopia. The question we need to ask is really whether repression would in any way not make things worse.

While it would be an enormous mistake to attribute such a narrative to all abortion stories, there are, I have no doubt, women who get abortions (or, for that matter, use contraception or abstain) at times in their lives when they themselves would be happy to have a baby, if the world were structured in such a way as to make that choice a plausible one. But what does this tell us? Where the theoretical “boss” is concerned, this would suggest a need for better labor laws protecting pregnant women and new mothers, and adding in parental leave more generally. In terms of “mom and dad,” they could use, what, a basic income to help them support an unexpected grandchild? A lesson on not stigmatizing out-of-wedlock births (as this theoretical case, I’m inferring, would be)?

The thing is, we don’t live in that world, certainly not in that country. The societally malleable reasons women get abortions aren’t going anywhere. And those are, once again, not the only reasons women ever get abortions. Outlawing abortion will simply bring the procedure back to the illegal and dangerous realm. Or in the ‘best-case’ scenario, the woman gives birth unwillingly because that’s what the law demands, and is out of work because she has a kid and her boss isn’t into that, or because even if she gives the kid up for adoption (which is, I’d imagine, not traumatizing at all, argh), her boss isn’t into having heavily pregnant employees, either.

Opponents of abortion would do well to take seriously the reasons Mathewes-Green gives for leading certain women who would not otherwise want abortions to go that route. I lose Mathewes-Green the moment she switches from a consideration of women to a fetus-centric discussion where women are, alas, an afterthought.