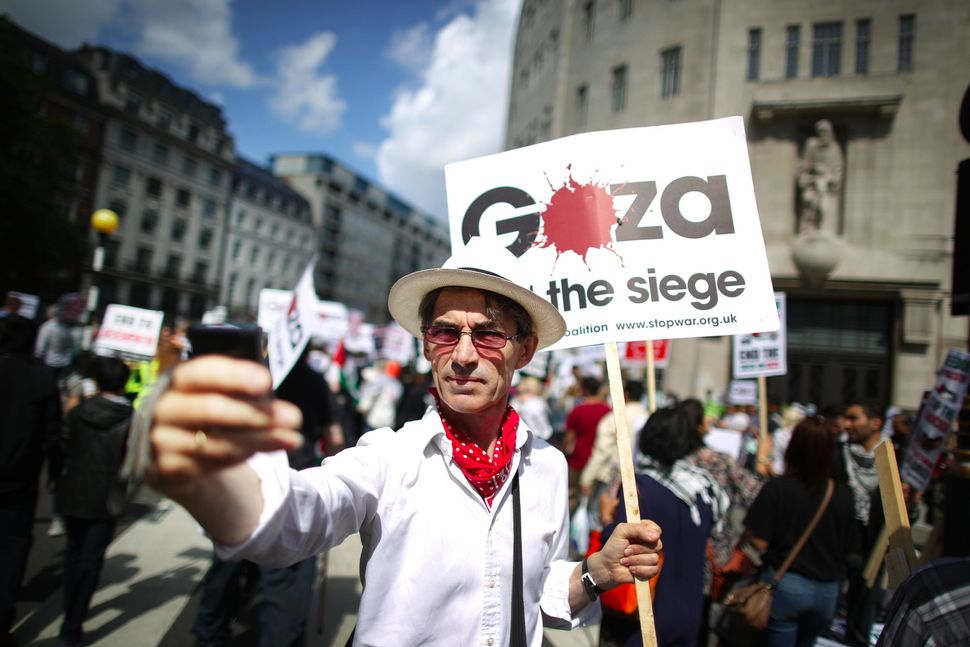 When I moved to a new, Midwestern city to attend graduate school, I did what many young, single people do: I joined a dating website. After a few weeks, I began to notice that the men who messaged me tended to fit a certain type: bookish, serious, and strongly invested in being seen as intellectual and cultured. They wore glasses, liked foreign films and cooked vegetarian food. They were, in short, a lot like me.

But one day, as I read through the profile of a young man who had sent me a reasonable polite and literate message, I noticed something jarring. At the bottom of his profile, he had affixed a disclaimer: “Don’t message me if you’re a Zionist.”

I went back to the message and read it again. It was very polite. I found myself at an impasse. I genuinely had no idea whether to answer. At the time, I didn’t consider myself a Zionist and his profile didn’t say “Don’t message me if you’re a Jew.” Yet at the same time I felt rebuked, as if it were directed at me. And didn’t that mean it was? If I were really “not a Zionist,” then I wouldn’t identify with that warning and I’d able to answer. But I had hesitated, so I must be.

I decided not to reply to the message although I still found it preoccupying, especially after I found a number of profiles with similar warnings. They all came from young, white men who made no mention of being Jewish but described themselves as “pro-Palestine and anti-Zionist,” fighting against “racism, sexism, homophobia, and Zionism,” or having “no tolerance for fascism, imperialism, and Zionism.”

The simple answer would have been to ignore the warnings, to say that, since they made me uncomfortable, these men simply weren’t right for me. But I continued to find them perplexing. These men were my matches; they were the people that the computer had determined were most “like me.” And why would a 38-year-old white librarian use the limited amount of space on his online dating profile to broadcast his antipathy for Israel? Unless you are actively engaged as a Hamas fighter, chances are you spend far more time watching TV or exercising than trying to dismantle the Israeli state. It didn’t necessarily surprise me that these people defined themselves as being against Israel but it did that they thought it was necessary for their future sex partners to know that right off the bat.

Eventually, I did go out with one of the men and, after a time, asked him about a picture he’d posted of himself wearing a keffiyeh and holding up a “Boycott Israel” sign. He seemed bewildered, as if it simply hadn’t occurred to him that someone might read a deeper meaning into the photo.

“I didn’t mean for it to be about Jews,” he said, “I just wanted to show that I was political and I go to rallies.”

I was taken aback. How could it not “be about Jews”? To me, Zionism and the movement against it were only about Jews: who we were, where we could live, our history and culture. I had assumed that these questions must be central to these people’s self-conception, but that was wrong. They had been completely effaced. Because, for these men and women, Zionism actually wasn’t about Jews; it was about something else. It was shorthand for what they wanted to be: free-thinking, politically conscious, liberated, sexy.

Anti-Zionism, like all political positions, had become a marker of a certain lifestyle, in the same way that vegan brunch was a marker of that lifestyle. You showcased your political beliefs to show you were “political,” which also meant cultured, educated, and discerning. And politics were part of everyday bourgeois life: you went to communal yoga to de-stress after your latest round of protesting the Israeli embassy or snarked about the Israeli flag in your dentist’s office over a round of craft beer. None of this was about Jews, of course, because you said it wasn’t and what you say tends to be true and right.

I certainly wasn’t exempt from that type of behavior myself, even if it took being on the other side of it to realize how grotesque it was. There were people living and dying over politics, not just Israel and Palestine, but any number of the cultural left’s pet issues. But the experience opened my eyes, not only to the way that the personal is political but to the way the political has become personal.

Emma Needleman is a writer and comedian from Philadelphia.