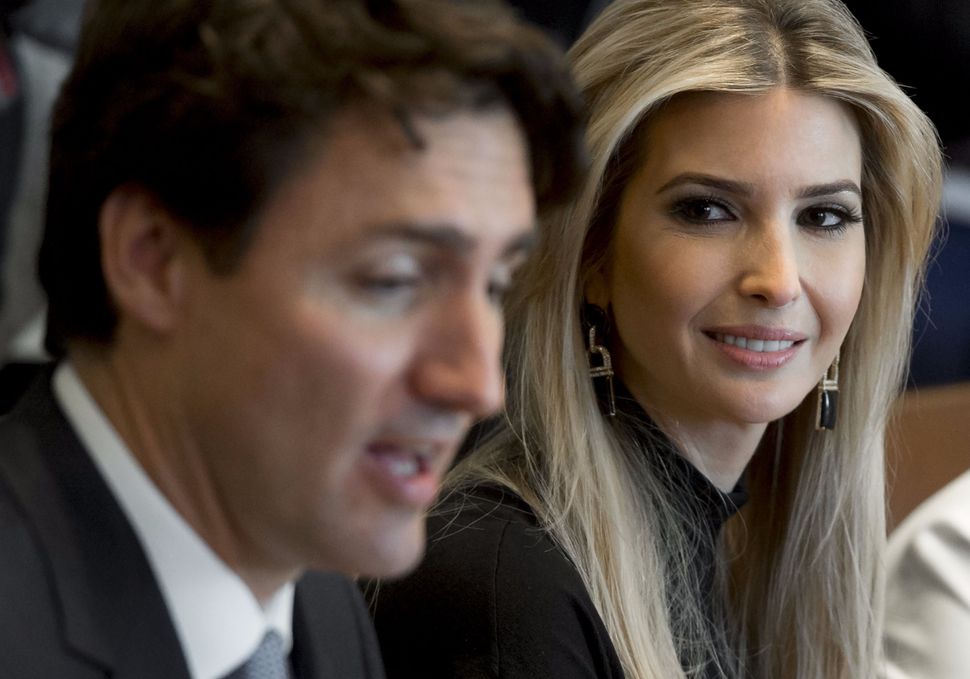 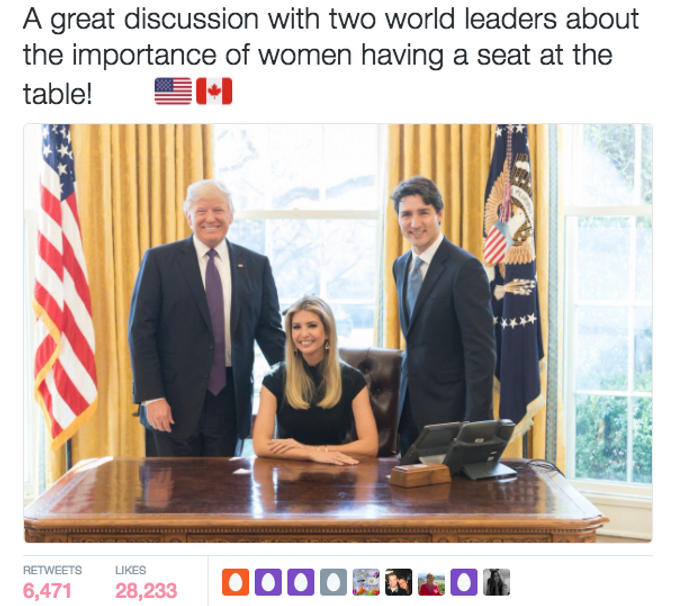 Well, it happened. The round-table meeting between Canadian and US businesswomen and our nations’ male leaders (and one First Daughter) took place on Monday, looking very much gender-balance-wise like humanities graduate seminars. The goals of the round-table itself — “a cross-border council to advance women into executive roles, and to encourage entrepreneurship” — seemed designed to elicit think-pieces about the shallow hypocrisy of elite, corporate, or otherwise insufficiently radical feminism. But that was, in a way, the least of it.

A big part of Trudeau Day was, of course, photo ops. Ivanka duly tweeted something Very Empowering: “A great discussion with two world leaders about the importance of women having a seat at the table!” She’s seated, literally, at the table (and by “table” I mean Oval Office desk), flanked by a standing Donald (giving her a little pat) and Canadian Prime Minister Justin Trudeau (not making physical contact). It’s Empowerment Lite, Lite. Weightless, even.

What’s enraging about the photo is that Ivanka’s sitting at the president’s desk, in the way a young girl sits at her father’s desk on Take Your Daughter to Work Day. It’s a ‘cute’ photo, in the patronizing sense, because, as we all know, he is the president and she is the president’s kid. It’s not a photo that raises the possibility of Ivanka pulling a Marine Le Pen. The Ivanka of this image is the heiress with the failing fashion brand. The ‘feminist’ messaging — the adorbs “seat at the table!” bit — makes light of the efforts not just of the millions of American women whose concerns are more getting-by than glass-ceiling, but also, yes, of women trying to reach the top of elite professions.

Also, and not unrelated: The photo is a big (tries in vain to think of the non-obscenity-using way to phrase this) to Hillary Clinton supporters. That is, to those who tried, unsuccessfully, to get a woman into that spot for real.