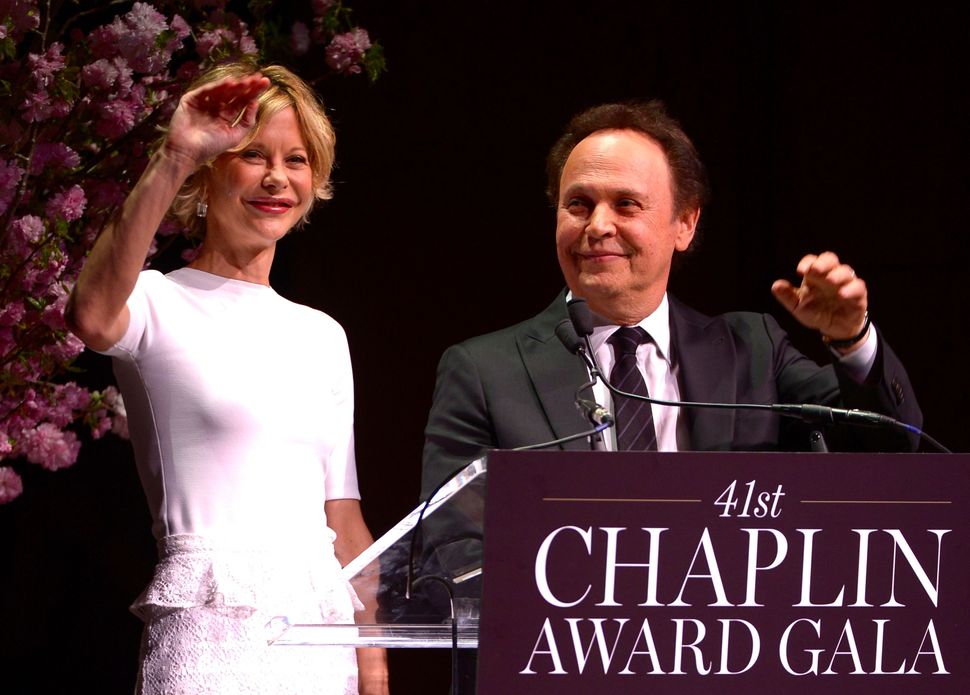 The question “When Harry Met Sally” posed remains with us. Image by Getty Images

An article appeared a couple of weeks ago in the Federalist, “Why Men and Women Can Never Be ‘Just Friends’”, that inspired a lot of pushback at the time. While its author, Hans Fiene, is a Lutheran pastor, the topic the piece deals with — demographics — couldn’t be more connected to Jewish life. Fiene, to be clear, is interested in the overall American birthrate, not the Jewish one. However, many of the places his argument goes wrong do wind up having implications for Jewish discussions as well. There’s always a danger in basing life advice to individuals on bigger demographic goals, rather than on what makes sense for the individuals in question. And demographics-focused romantic advice has this tendency to ask more of women than of men.

So. Fiene is worried that there aren’t enough new Americans. With that concern in mind, he might have thus suggested easing immigration restrictions, or just making it more affordable to raise a family. Instead, he suggests that “[w]e tear down the Friend Zone”:

Every year, countless young men find themselves trapped in the Friend Zone, a prison where women place any man they deem worthy of their time but not their hearts, men they’d love to have dinner with but, for whatever reason, don’t want to kiss goodnight.

How, one might wonder, does unrequited romantic interest relate to birthrates? Fiene goes on:

Being caught in the Friend Zone is an inarguable drag on fertility rates, as a man who spends several years pledging his heart to a woman who will never have his children is also a man who most likely won’t procreate with anyone else during that time of incarceration. Free him to find a woman who actually wants to marry him, however, and he’ll have several more years to sire children who will laugh, create, sing, fill the world with love and, most importantly, pay into Social Security.

The rest of the piece is a standard-issue insistence that men and women can’t be friends because (note the asymmetry here) men are always interested in more than friendship.

Why are such arguments a problem? First, because of the warped view of both friendship and desire. Men and women — even straight ones! — can indeed be friends, without any romantic interest on either side. But sure, in some opposite-gender friendships, one party is (or winds up) secretly pining for the other. It can’t be assumed, however, that the pining party is the man. That the covert crush-haver could be the woman isn’t a possibility Fiene acknowledges, as is clear from the end of his piece, where he advises women attracted to a male friend to state their interest (and mention marriage while doing so!): “Don’t worry that he’ll reject you,” Fiene writes. The guy friend wouldn’t have been hanging around in the first place, Fiene claims, unless he had romantic intent. A curious assertion, I suspect, for any woman who has ever, in her life, had unrequited romantic interest in a male friend.

Thankfully, Fiene’s version of the “Friend Zone” argument does not include an insistence that women date men they’re not attracted to. He’s ostensibly asking women not to string men along. And yet the language he uses (“prison” and “incarceration”), along with the overall argument of the piece (that is, “friend zone” demolition), suggests that women who fail to reciprocate are inflicting cruelty on men, and should feel terrible. He doesn’t suggest that a man who doesn’t like a woman back, not in that way, has somehow wronged her. In the world of his article, that scenario doesn’t — couldn’t — exist.

And the thing is, men shouldn’t be criticized for not wanting to date their female friends! Nor should women. No one is obligated to welcome anyone else’s romantic overtures. The same courtesy Fiene implicitly extends to men — that is, the absence of any request that men date women they don’t find attractive — he should extend to women as well.

I bring the piece to Sisterhood readers’ attention not to be the nth person noting that an outrage-bait article was problematic, but because these are concerns we need to keep in mind if we wish to discuss the Jewish birthrate. (While I personally think there are more productive ways of discussing and promoting Jewish life, in part because I don’t see how there’s a gender-neutral way to make demographic demands, this is a topic likely to stick around.) If we’re talking about programs and policies that increase opportunities for young Jews to meet one another and take part in Jewish life, fantastic. But once we get to the level of advising individual Jews on their romantic and marital choices, let’s be sure to avoid approaches that shame women (or anyone) for not prioritizing demographics over consent.