Unfazed By Booing And Hissing, Ivanka Stays On (Vague) Message 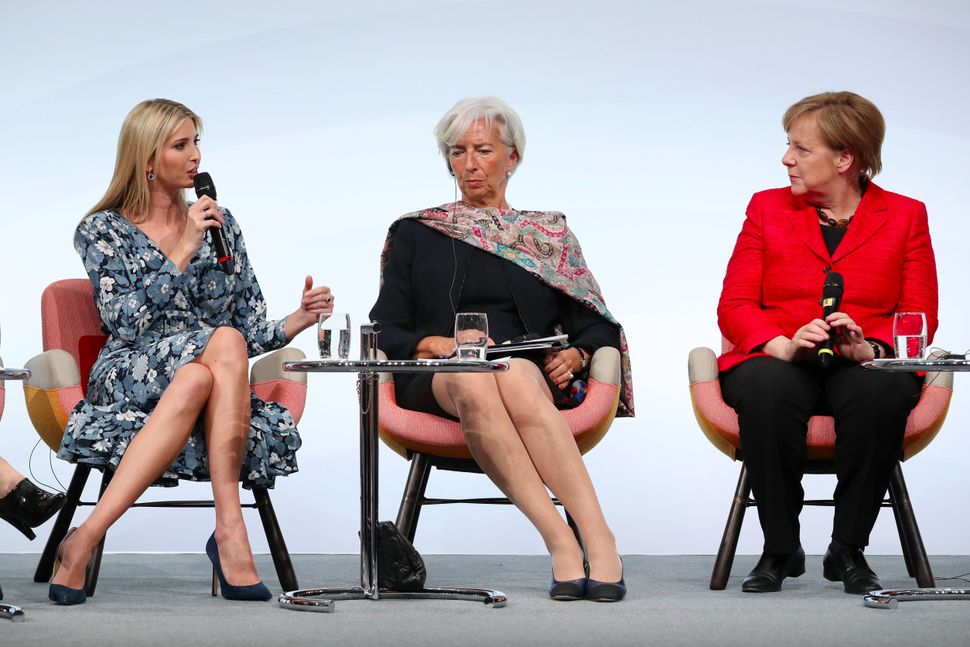 As the Forward recently noted, Politico reports that Ivanka Trump, daughter of President Trump, got a less than friendly welcome at the W20 Conference Tuesday morning in Berlin. Most strikingly, “she was booed and hissed at by the majority-women audience at the conference when she lauded her father for supporting paid leave policies.”

“You’re the first daughter of the United States, and you’re also an assistant to the president,” the moderator, WirtschaftsWoche editor-in-chief Miriam Meckel, said. “The German audience is not that familiar with the concept of a first daughter. I’d like to ask you, what is your role, and who are you representing, your father as president of the United States, the American people, or your business?”

The issue with Ivanka remains the ambiguity of her White House role, rather than the nepotism itself (insofar as these can be separated). The United States is not a monarchy, making it unclear in what capacity the president’s daughter is sitting alongside luminaries like German Chancellor Angela Merkel and International Fund (IMF) Managing Director Christine Lagarde. If a country is a monarchy, there isn’t that ambiguity: Karni notes that “Queen Maxima of the Netherlands was also a participant on the W20 panel,” but doesn’t mention a hubbub over the existence of royalty.

So why was Ivanka there? “She did not define what her new role as a senior White House official entailed,” writes Karni, but rest assured that Ivanka “call[ed] herself a feminist.” What comes through with frightening clarity from Karni’s piece is that either Ivanka doesn’t know herself what her role is in her father’s administration, or does know but considers it acceptable not to say.

Unfazed By Booing And Hissing, Ivanka Stays On (Vague) Message