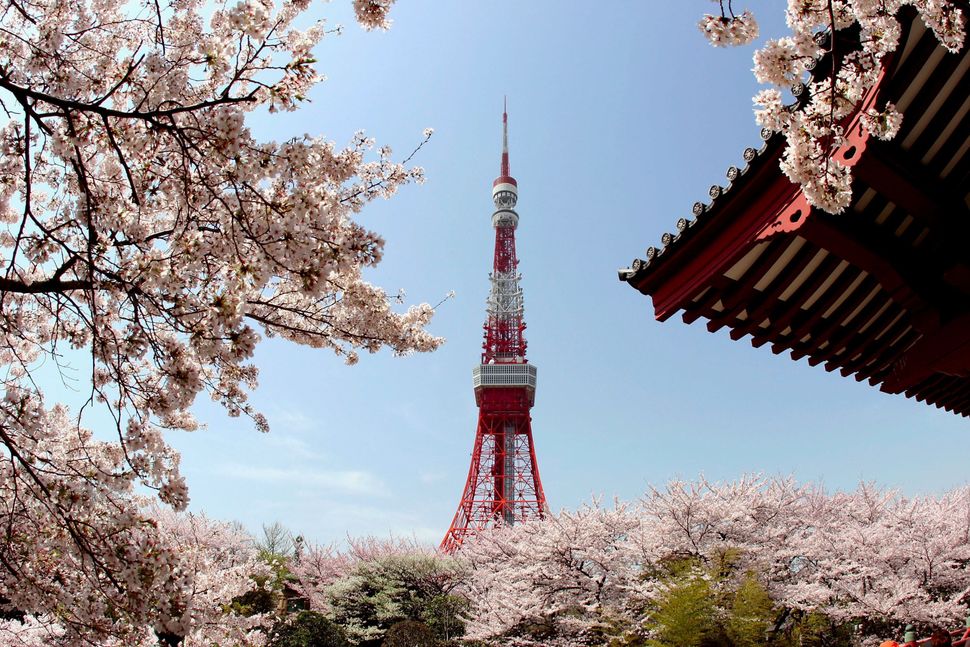 I could almost see my mother sitting in a wing-tipped teak chair at the head of a familiar oval dining room table in a caramel shade of teak.

“Go on. Treat yourself,” I heard her say in her clipped London accent, surrounded by vintage Danish modern teak furniture from my 1960s childhood.

But that couldn’t be. I was in the lobby of Tokyo’s Shinjuku Park Tower in 2017, in a building known for both its restaurants and furniture showrooms. Though I had lived in Tokyo for many years, there in front of me was my 1960s suburban New York living room, complete with the familiar desk that was my mother’s control center, her perfectly manicured nails hitting the typewriter keys as she typed a paper for the college classes she decided to enroll in when I was in junior high.

In 1972, she was both a new student of literature and an old hand at place setting and polishing her prized teak living and dining set.

“This is the real Macoy. You need to buy this,” I can hear her say.

She would have been wearing her peach linen skirt and matching jacket that she wore only weeks before, at 84, when she hoisted herself up by her cane, climbed a few steps, stopped, coughed, rested and coughed some more. Slowly but with absolute determination, my mother was making her way to a mezzanine seat to see Broadway’s Hamilton.

“You know, Liane, ‘Hamilton’ got rave reviews. That’s why I’m flying up to New York. I’m dying to see it,” she had said on the phone.

I was used to my mother using this effusive expression — dying for the things that mattered most to her, like seeing a good show. So it never occurred to me to take her literally. 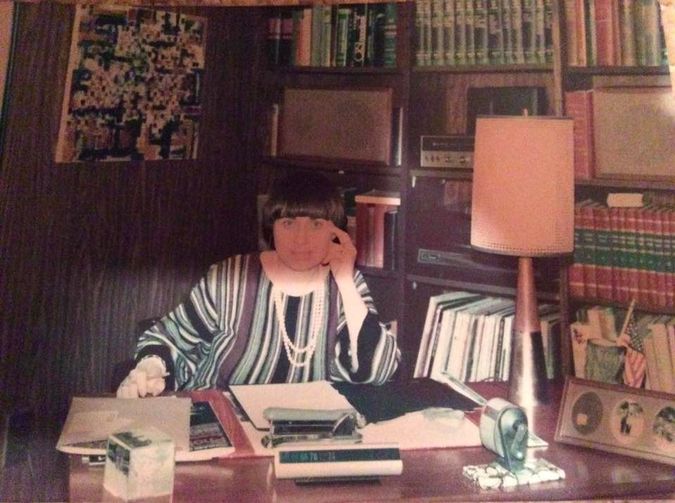 The author’s mother, Adrianne, at her desk. Image by Courtesy of Liane Wakabayashi

And yet, six weeks after seeing “Hamilton”, my mother died of lung cancer just shy of her 85th birthday. Trying to hold on to her essence, of actually being able to sit with her every day, I had been thinking of shipping her desk from West Palm Beach to Tokyo, an improbable feat at best, and a ludicrously expensive one too.

I could picture my mother at her teak desk writing me nearly three decades ago with a question that gnawed away at her from halfway round the world.

“Where are you going to meet a Jewish man there?” she tapped away on her vintage green Hermes typewriter in 1987. After I left New York for a magazine assignment in Tokyo, I became a regular at the Jewish Community Center, where I organized an exhibition for six young Jewish artists, not a few of them single, hoping to prove to my mother that there were Jewish prospects in Japan after all. That is, until one of the artists led me to an acupuncture clinic where I would strike up a friendship with the Japanese therapist with whom I’ve shared more than a quarter of a century of my life.

I stood transfixed by the teak, missing my mother with every passing second. The quietly understated showroom furniture made me think of my parents as newlyweds, that they believed that marital happiness could flourish through a shared appreciation of chunky teak contours on skinny legs.

My parents began their married life with enough Danish modern furniture to fill every corner of their humble one bedroom apartment — both a wedding gift and gesture of long-distance support from my grandparents.

I was born at the end of that first year of marriage, and when my mother was pregnant with my sister two years later, the teak furniture accompanied our growing family to New York City, where the American dream came in the form of a job for my civil engineer father and the excitement at being reunited with his aunts, uncles and cousins, who had found safe refuge from the anti-Semitism they had experienced under Communism. For my mother, those extra dining chairs and leaves could finally be put to good use.

The teak oval table, designed as ingeniously as Lego blocks, would be extended for holidays. The extension of the table promised happy cooperation between my parents, as one had to stand at either end and play a game of tug-of-war to extend it enough to form a gap to insert two wooden leaves. The procedure would conclude with a macho flourish from my father — a powerful shove to close the gaps.

Seeing the teak dining room table in the Shinjuku Park Tower atrium triggered memories of dowdy aunties in flowery home-sewn dresses and uncles in neckties — even on Sunday — gathered around an extended table beautifully set with white embroidered table cloths, bone china dishes, and ruby red cut wine glasses. Carrying huge platters in a sleeveless cocktail dress, my mother would make her dramatic appearance straight from the beauty parlor with a fresh bouffant, light as chiffon. Her makeup would be painstakingly applied to enhance her pretty grey blue eyes with rosebud pink lips. She would stand at the head of an extended teak table with mittened hands holding a huge serving platter crowned with roast beef simmering in its own juices.

“Bon Appetit,” she would say cheerfully, and our aunties and uncles would reply politely back, “Pofta buna”, the Rumanian equivalent, words that my now-naturalized American father never encouraged me to repeat.

In 1971 my parents scrimping and saving led to the purchase of a modest 1930s white stucco house with blue shutters in the old village of Great Neck, which I am reminded of when I practically hear the familiar clacking of my mother’s Swiss vintage putty-green colored Hermes typewriter coming from the showroom.

My parents’ couldn’t be more different. With a French door between them, there would be my father on the other side, in the den, lounging on the maroon seating of a teak-armed sofa in front of the television set, watching “Laugh-In”, with a grooming brush in his hand and our black Scotch Terrier, Licorice, on his lap.

He was content with the ridiculous while my mother was in the dining room next door reaching for the sublime. When I was starting elementary school, my mother had decided to go back to school, slowly completing a B.A. in English. She would attend two English literature classes each semester at Queens College, then on other days of the week sit down to type up her college papers, pausing once in a while to laugh at her own jokes.

“What’s so funny?” I’d ask my mother as I approached her at the teak desk one night after emptying the dishwasher. As usual, after dinner and a long day at her secretarial job in Manhattan, she retreated into a world of her own.

“I’m writing an essay,” she began, and then proceeded to read from a sheet of paper propped upright in the typewriter roller: “I remember the lamplighter who would come around silently before dusk to our street in Wimbledon. He couldn’t bear to be spoken to in any voice slightly above a whisper. My mother explained that he had been a soldier at the war front who had been shell shocked and we must be careful to humor him.”

My mother had received training as an actress at Guildhall School of Drama in London, so I had never suspected that she had actually learned the art of humoring those she loved from a lamplighter. At her teak desk, my mother honed this other craft — writing — but alas never quite took it seriously enough to publish.

As the sixties rolled on, my mother became a woman of her times, a rebel in Betty Friedan’s “Feminine Mystique” mold, of wanting to learn and be heard. She did this by joining Temple Israel’s theatre group and taking lead roles.

I believed that if I read and wrote as much as she did, I would gain possession of the secrets too.

But eventually my mother’s solitary writing and reading, which lit her up from within, made my father to demand what he surely perceived to be reasonable—that she abandon her “gallivanting to night school” at Queens College. He didn’t like that my mother was pursuing a dream outside the house.

A household of perfectly matching teak furniture — and a solitary refuge, a teak island of a desk — couldn’t save their increasingly unhappy marriage. I was already in my twenties, graduated from college, tapping away on a typewriter of my own, when my parents decided to split the furniture and get divorced. Shockingly, as if over night, the teak of my childhood was abandoned for mahogany and walnut in homes both belonging to and furnished by new spouses.

By this time, 1984, I lived in a studio in Brooklyn Heights containing a trove of furniture that I could call my own. I inherited a suite of French provincial furniture from the Hotel Middletown, which my uncle managed. I would come home from a secretarial job to a studio apartment that looked like my own hotel room, with ornate floral carving on a chest drawers painted ivory and baby blue. The irony of working in my mother’s profession wasn’t lost on me. As soon as I could, I followed in my mother’s footsteps. I put my things in storage and set off for a year abroad, heading East to Tokyo after I received an offer too good to refuse — an assignment to write about art exhibitions in Japanese department stores. Secretly she cried her eyes out, knowing what I could hardly have imagined—that this move to Japan was for good.

Thirty years later, as I hovered around the furniture that a Tokyo showroom called vintage, I was reminded how the most valuable memories aren’t necessarily in black and white: they are in teak, too.

Liane Grunberg Wakabayashi is a longtime Tokyo resident and journalist for the Japan Times. She blogs about Jewish-Japanese life and raising her family in two traditions at www.lianewakabayashi.com