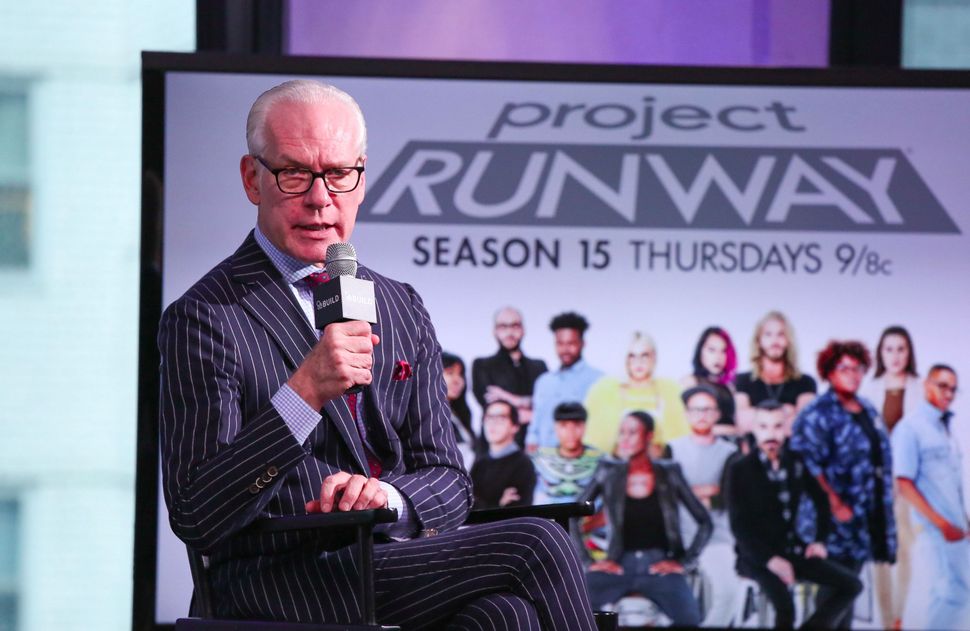 Last fall, Project Runway’s Tim Gunn took fashion designers to task for not designing clothes with non-model American women in mind. Gunn focused on unrepresentative sizing, but as I try to decide what to wear to my third daughter’s baby naming ceremony (or to synagogue on Saturday mornings, for that matter) I’d expand Gunn’s critique to clothing marketed for breastfeeding women. For breastfeeding new moms of all sizes, the pickings are slim.

Every stage of life has its own dress code. In college, I wore jeans and Doc Martens everywhere except Shabbat services at Hillel. When I moved to Washington and joined the workforce after that, I quickly learned that I needed black suits and added some to my closet, along with some heels. When I became pregnant the first time, I encountered the brilliance of ruching and fell back in love with flats. And when Daughter #1 arrived, I discovered that most women’s clothing is completely incompatible with breastfeeding.

The blogosphere devotes plenty of real estate to exploring women’s transition to motherhood in granular detail. But one aspect remains under-discussed: The challenge of dressing the part — specifically in settings that require formal, modest attire.

There simply aren’t many choices, particularly if you’re on the shorter side, as I am; offerings are always more limited for petite women than for our taller counterparts, and maternity wear sizing typically ignores my co-heightists altogether. It appears that clothiers are leaving a void, and it’s unclear why. Do they not realize there’s a niche to be filled, do they believe they’ve already filled it, or do they see it as too small a space to merit its own specifically tailored sartorial answer?

It’s possible that designers believe they’ve already got this covered. After all, women regularly work throughout pregnancy and early motherhood. Those women must wear something work appropriate, and they turn to a variety of stores that cater to women who work in offices or elsewhere — but unless those women have a private space to pump (and partially undress), their choices are likely limited to outfits built around tops they can lift. Most dresses just aren’t practical. As a mother who writes from home, my maternity wardrobe was largely based around comfort. For the last two pregnancies, I needed clothes that enabled me to chase my toddler, along with a few pieces dressy enough to wear to professional events and religious services.

However, with the arrival of this third baby, my litmus test for clothing has shifted once again. While pregnant, I needed clothes with a forgiving mid-section; that restricted me to maternity wear. But these days, as I try to shed my maternity wardrobe, I face an added challenge: Because I’m breastfeeding, all shirts and dresses must easily open while one-handed (since the second hand is typically busy holding a hungry Daughter #3). And when I eventually have to pump at professional conferences again, I expect to face the same limitations.

Finding casual clothes intended for, or at least compatible with, breastfeeding isn’t so hard. However, finding nursing-friendly clothing that’s suitable for synagogue or a buttoned-down professional setting is tough! Most women’s clothes with easy access up top are low cut, and cleavage inherently clashes with with shul.

Whether this gap in the spectrum of women’s clothes stems from a perceived design conflict or a faulty assumption about what women prefer to wear, the status quo remains inadequate. If I were still pregnant, I’d simply add a large scarf, but that’s no longer practical: If Daughter #3 spits up, it’s off to the dry cleaner — the scarf, the baby, and me. And who has time for that?

Motherhood brings with it a host of changes and challenges. Mastering how to care for a helpless tiny person is an uphill climb. Why must it also be so hard for new mothers to dress modestly and stylishly?

Come on designers, it’s time for a change. As Tim Gunn’s already suggested, you should make your clothes match the complexity of women’s lives.