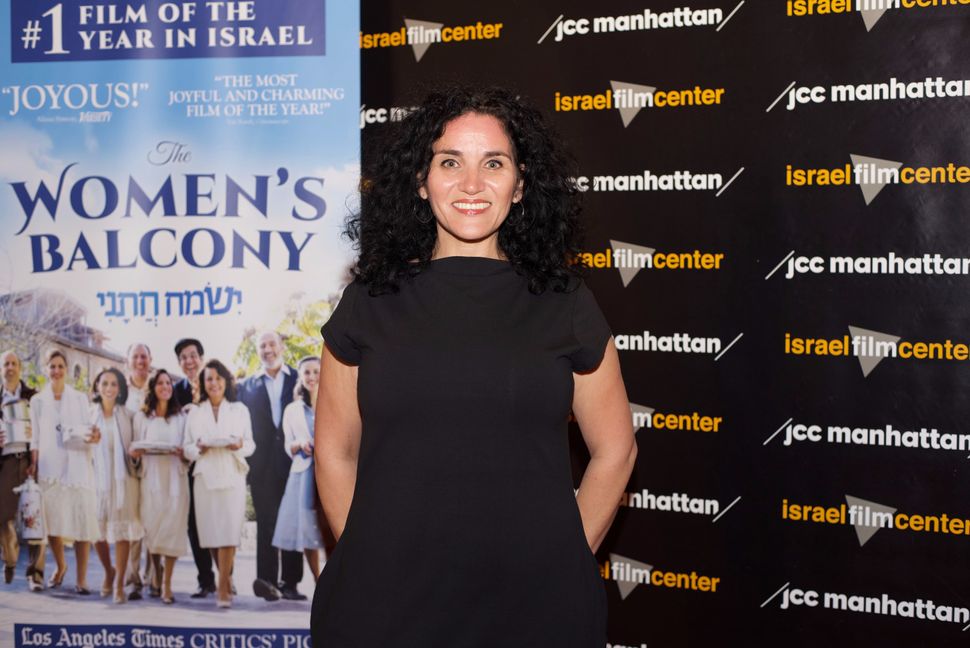 Details of conflicts between Israel and its neighbors in the Middle East have filled the news, of course, for many grief-filled years. Less prominently discussed outside of Israel are conflicts between communities of Jews in Israel — for example, over methods of and approaches to religious observance.

Emil Ben-Shimon’s dramatic comedy “The Women’s Balcony” explores issues that arise when observant communities clash on what being observant actually looks like and means.

The film begins with a small, joyful Modern Orthodox congregation in Jerusalem coming together in celebration of a bar mitzvah. All is well until a serious accident occurs: The balcony in which the women pray — this congregation observing the tradition of separating men and women in the sanctuary — collapses. The rabbi and his wife are elderly; she is gravely injured in the accident, and he is unable to cope with what has happened.

The congregation needs help — to preserve its spirit and to restore its temple. And so an offer of assistance from young Rabbi David (Aviv Alush), who teaches at a local seminary, seems like a literal blessing. David steps in as a temporary leader and assures the struggling congregants that he will oversee the building’s repairs.

Unlike the congregation, however, David is ultra-Orthodox. He delivers on his promises, but he does so in a way that reflects his strict interpretation of Jewish law while sowing disagreement among congregation members, especially between the men and the women.

Enriched by beautiful performances from the ensemble — including Evelin Hagoel and Igal Naor as Etti and Zion, a happy and central couple in the community who find themselves driven to conflict by David’s influence — “The Women’s Balcony” asks difficult and perhaps unanswerable questions: Is one form of Jewish observance superior to another? Can any mortal claim the right to judge another along these lines?

Screenwriter Sholmit Nehama grew up in an Orthodox community in Jerusalem, similar to the one depicted here. She has said her goal with the film was “to tell the story of the moderate people who are forced to deal with growing religious extremism.”

Like members of the congregation, I was at first impressed with and surprised by what seemed to be Rabbi David’s enlightened approach. For example, he explains to the men that women are exempt from scripture study because “the scriptures dwell within them,” continuing by asking, “Do you realize how superior to us women are?” But his sermon ends by declaring that women must protect this “superiority” by covering their hair at all times — and prodding the men to make sure they do so.

Clear-sighted Etti understands from the start that David is assisting the congregation in part to wield influence upon it; and his influence is in no way to her liking. As longstanding congregational and even familial bonds fray, she confronts him harshly: “Is that what a rabbi is supposed to do? Enter a community of good people and fill them with fear?”

“The Women’s Balcony” asks us to question what it means to be a good Jew and, indeed, a good person. By whose interpretations shall we conduct our lives? Confronting her friend Tikva (Orna Banai), who has suddenly come to judge her as inadequately devout, Etti recalls a time when kosher-keeping Tikva was accidentally served pork chops at a restaurant. She refused to embarrass the waiter, or waste the food, by sending them back; instead, Tikva gently fed the meat to a cat that was wandering beneath the tables. “That is who you were,” Etti reminds her forcefully, “before you repented.”

“The Women’s Balcony” begins with a celebration, and it ends with one as well—but not before raising critical questions that we can only answer for ourselves.