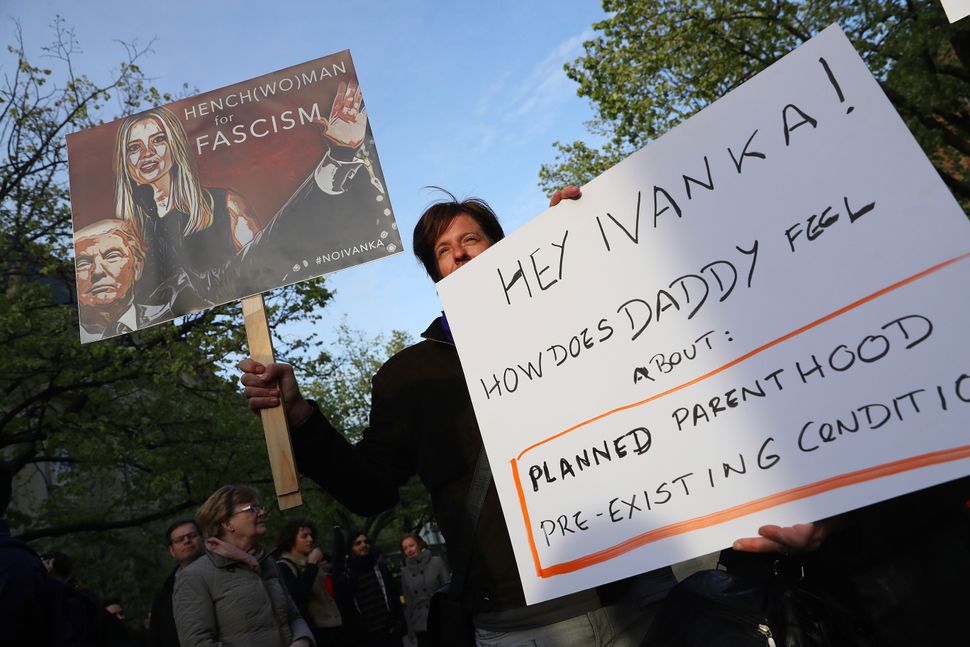 In Berlin, a protestor asked Ivanka to check in with “Daddy.” Image by Getty Images

By the time images captioned captioned “Why I disagree with my dad,” I had a sense a meme was under way, but that I’d missed the reference. As I learned moments later, the inspiration was US Weekly’s new Ivanka Trump cover story, whose headline is, sure enough, “Why I Disagree With My Dad.”

A teaser version online, bylined Us Weekly Staff, quotes “[a] source close to Ivanka” and “another Ivanka insider,” but not Ivanka herself. It includes the tremendous sentence, “But Ivanka is the best woman for the job.” It does not, however, address the question of why Ivanka disagrees with her dad. It merely re-ups the vague impression that Ivanka and husband Jared Kushner are fans of LGBT rights and the environment. Given how many, in the US and beyond, have long lists of why they (we; I include myself here) disagree with Ivanka’s dad, the headline is a not-so-subtle plea to bring Trump’s opponents onto Team Ivanka. Why?

On The Cut, Allie Jones may have the answer: Us Weekly, writes Jones, was recently purchased by “the Trump-friendly American Media Inc.” Jones argues that layoffs post-sale mean the magazine no longer has the reporters with close celebrity contacts it once did, making the publication unusually susceptible to the “flattering” but interview-less profile genre. (It is as yet unclear whether the print version will include an actual interview with Ivanka; it’s hard to imagine, if it did, why the online preview wouldn’t reference that.)

The takeaway here is, as always with Ivanka, to treat anything purporting to be news about her role as resistance-from-within with skepticism.