‘Are You Or Have You Ever Been A Zionist?’ A Letter To Chicago Dyke March 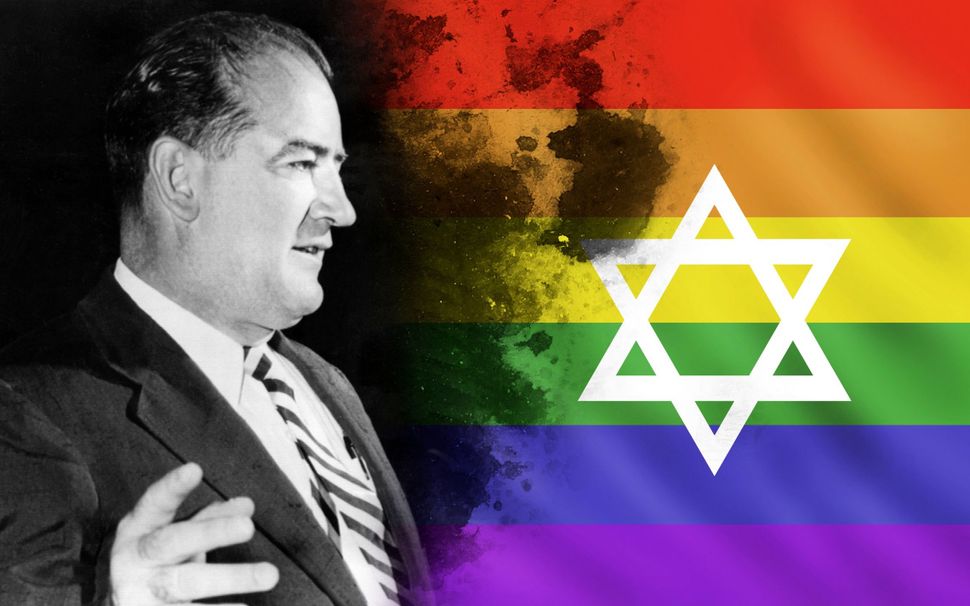 To the Chicago Dyke March organizers:

“Are you now or have you ever been a member of the Communist Party?” The House Un-American Committee (HUAC) routinely asked that question. The history of McCarthy-era witch-hunts shows that political litmus tests and coerced loyalty oaths serve to clean house, to delegitimize and expel undesirables. Not surprisingly, HUAC was notoriously anti-Semitic and homophobic.

Your interrogation of women carrying Jewish Pride flags at the march this past weekend was a McCarthyist spectacle. By your own admission, you decided to expel those who had the chutzpah to identify as queer Jews “after they repeatedly expressed support for Zionism during conversations with Chicago Dyke March Collective members.” So the witch hunters have shifted from right to left, with Zionism now functioning as the anti-Semitic dog whistle.

Of course, you say that you’re not anti-Semitic, just anti-Zionist. Rather than apologize, you demonstrated your “inclusiveness” by selecting some Jews over others: “anti-Zionist Jewish volunteers and supporters are welcome at Dyke March and were involved in conversations with the individuals who were asked to leave.” Divide and conquer a twice-blessed and doubly marginalized group under a banner of social justice. Quite the rhetorical high-wire act.

For you, a Star of David equals Israel. You ignorantly read a Jewish Pride flag as an “Israeli flag superimposed on a rainbow flag.” Your paranoia about pink-washing erases Jewish dykes. There’s no superimposition of one identity onto another: It’s both/and. QueerJew/JewQueer.

But you live in a black-and-white, either/or world. When Laurel Grauer, carrying that flag you deemed a “threat,” tried to explain that she’s invested in Israel but also in Palestinian self-determination, you refused to listen: “You cannot be Zionist and believe in a Palestinian state, Zionism is inherently racism.” Ah, UN Resolution 3379, adopted in 1975. Are you aware that the United Nations, not an especially Israel-friendly institution (how’s that for understatement?), revoked 3379 in 1991? You ignore (or don’t know) the complexities of history and identity. Instead, anyone who identifies as a Jew must pass a political litmus test: “Are you or have you ever been a Zionist?” So I have a question for you: if a Jew passes that test to your satisfaction, can she keep her Jewish star?

A group supporting your bad behavior, For the People Artists Collective, seems to say that a Jewish star on its own—the simple assertion that one unambiguously identifies as Jewish – is verboten: “As artists and cultural organizers, we know that visuals are incredibly communicative tools that have the power to both help and harm us. Imagery that either intentionally or unintentionally invokes Zionism without any attempt to acknowledge or subvert those visual associations only serve to bolster support for Israel.” Sounds like a group for only some of the people and against freedom of expression – an odd stance for an arts group.

But enough about you, let me tell you a bit about me and the skin I have in this game. I’m a progressive Jewish feminist academic, who always identifies as such in my writing but doesn’t always feel safe doing so on the street. The proliferation of swastikas since the election, bomb threats to JCCs, and social justice warriors who seem not to have my back function as my triggers, but I remain committed to alliance politics.

I actually don’t self-identify as a Zionist (though you and your ilk are causing me to rethink that — as dykes, queers and feminists know, sometimes you have to reclaim terms used against you). I do identify as pro-Israel and pro-Palestinian, your denial of that possibility notwithstanding. I was a queer ally long before I had the words to describe myself as such. I wept the first time I saw a Jewish Pride flag (which, unlike you, I could distinguish from the Israeli flag) because I understood that such a symbol meant that queer Jews need not, as Adrienne Rich put it, be “split at the root.”

This year’s Dyke March indicates that my unambiguous embrace of the Magen David (aka Jewish star) means that you want me out of your movement. But I’m committed to building alliances even when I’m angry and scared. So here’s my hope for next year’s march: a woman carrying a Jewish Pride flag and a woman carrying a Palestinian flag walking side by side (I’m tempted to add an Israeli flag into the mix, but I probably shouldn’t push it). I want the left in the U.S. to create images of peaceful coexistence, a reality that the majority of Israelis and Palestinians crave. If we can’t do that under diverse rainbow flags in a place with no literal checkpoints and no rocket attacks, how can peace and justice have a chance in the Middle East? Harvey Milk, that queer Jew committed to coalition politics, famously said, “You gotta give ‘em hope.” Your expulsion of those carrying Jewish Pride flags because they wouldn’t or couldn’t disavow Zionism is a politics of hopelessness, at home and abroad.

Helene Meyers is Professor of English and McManis University Chair at Southwestern University. She is the author of Identity Papers: Contemporary Narratives of American Jewishness, Femicidal Fears: Narratives of the Female Gothic Experience, and Reading Michael Chabon.

‘Are You Or Have You Ever Been A Zionist?’ A Letter To Chicago Dyke March