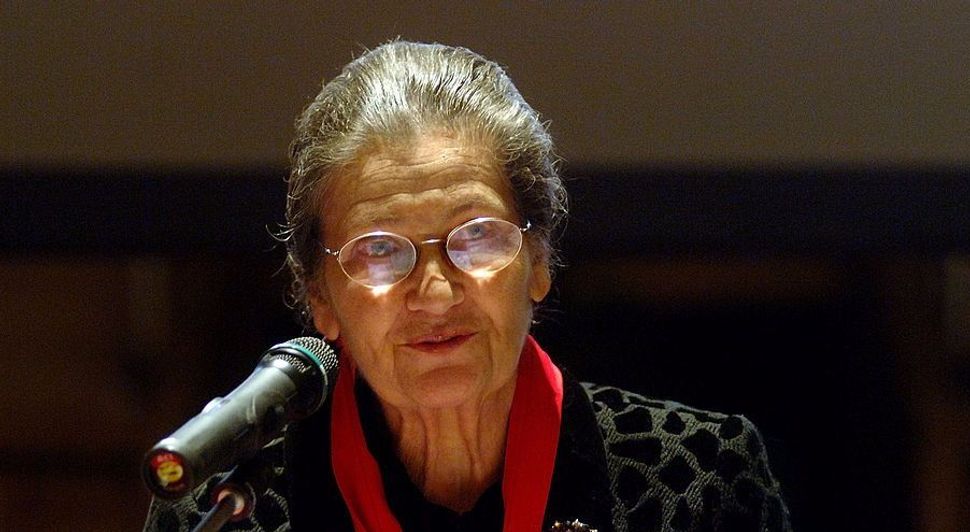 (JTA) — Simone Veil, a well-known French politician and Holocaust survivor, died at the age of 89.

Veil, a scholar, former judge, feminist activist and former minister of health who in 2012 was awarded France’s highest honor, passed away this week in her home in Paris, her family told the media in France Friday.

Veil, a lawyer by education, served as minister of health under the center-right government of Valery Giscard d’Estaing and later as president of the European Parliament, as well as a member of the Constitutional Council of France. In 1975, she led the legislation that legalized abortions in France.

Former French President Francois Hollande presented Veil with the Grand Cross of the Legion of Honour at the Elysee Palace in 2012. Fewer than 70 people have received the Grand Cross since Napoleon Bonaparte established it in 1802.

Veil, who was born in Nice, was imprisoned at Auschwitz but managed to escape the Nazi death camp. She published a best-selling autobiography in 2007 titled “A Life.” The following year, she was admitted to the Academie Francaise — a highly prestigious institution comprising individuals, often philosophers and writers, recognized for scholarly excellence.

The institution, which has 35 members, of whom only six are women, was “revolutionized” by admittance of Veil, a longtime campaigner for women’s rights, according to an obituary written about Veil by the RTL broadcaster.

The president of CRIF, the umbrella organization representing French Jewish communities, wrote in a statement that he is “immensely saddened by the passing of Veil.

“With her high standards and loyalty, this activist for women’s rights has left an indelible mark on French politics and its intellectual life,” CRIF President Francis Kalifat wrote, adding Veil had done so “with courage and dignity.”

In 2012, CRIF described Veil as “one of France’s most cherished personalities and someone who plays an important role in keeping her camp from succumbing to the temptation of allying with the Front National” nationalist party.

“Her name is associated with women’s equality, the memory of the Shoah and the European community,” CRIF added.