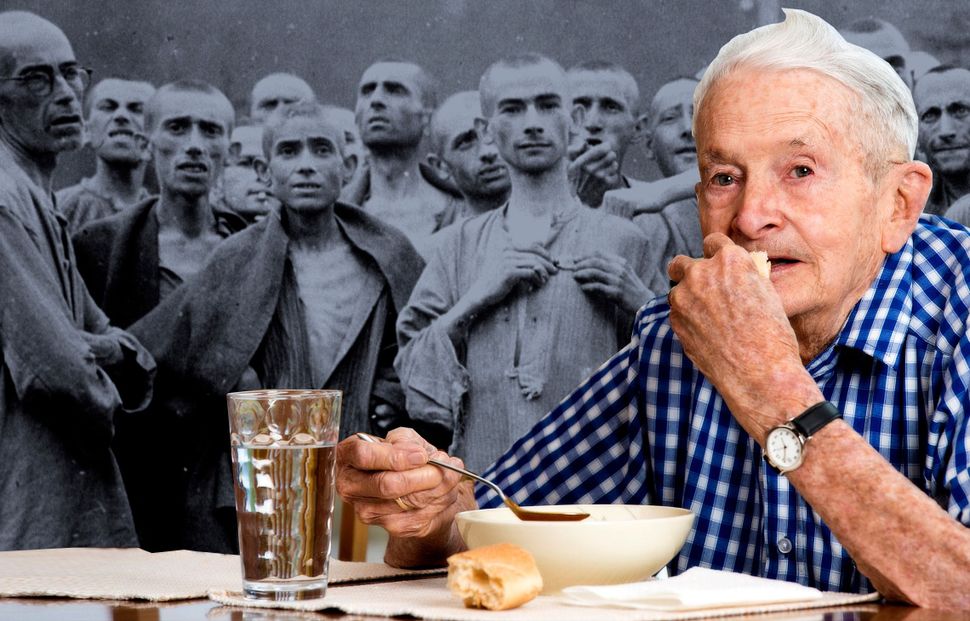 Until not too long ago, Tisha B’Av was an “eating day” for me. Every mouthful was a bid for God’s attention. “Look God! I’m drinking coffee! Over here — these blueberry waffles are delicious!” On Yom Kippur I fasted like a champ, but Tisha B’Av was my “un-fast.” “Look God, I’m eating!” It was an act against God, and an act for the sake of my father.

My father, a survivor, fasted every Yom Kippur. “Even in lager [camp], Yom Kippur I fasted,” he would say. Going without food or water for 25 hours was a kleynikeyt to him, a trifle. On Tisha B’Av, though, he ate, slowly and with purpose.

“I fasted plenty in lager, every day. Now God owes me. He has to pay back. Thirty kilos I weighed at Liberation. He has to fast for me now. “Davke I’m eating,” he would say. Davke, for spite. It was his “So there, God!”

Fasting on Yom Kippur elicited no protest from him, because the fast is elevating. “Yom Kippur is the holiest day of year. The Gates of Heaven are open,” he would tell me, and he seemed to believe it. Tisha B’Av is a day of mourning and self-abasement. Tisha B’Av isn’t formally a day of mourning for the Shoah, but with its narrative of death and desolation, connecting it to the Shoah is inevitable. My father had mourned and had been abased enough, and didn’t think it was just for God to also demand fasting.

“I’m not a freser [glutton],” he liked to say. On Tisha B’Av though, my father fresed, or at least tried. As deliberately as he took his place in his seat at synagogue and put on his tallit on the High Holidays, he took his place at our kitchen table. My mother put out food for him as he requested — herring, bread, fruit compote, freshly brewed coffee.

He didn’t like anyone else fasting, either. For a few years, in late July or August, my parents went to the Hotel Adler in Sharon Springs, New York, where the German government paid for survivors who had sustained injuries in the camps to take the sulfur waters from the mineral springs, which were thought to relieve muscle pain and arthritis. Among the guests were some Hungarians who had survived Auschwitz. They observed Tisha B’Av, eating eggs sprinkled with ashes as their last meal before the fast, and sitting on the floor in the dark, reciting Lamentations.

“You should see them,” my father said, “Crying, ‘Adonai, Adonai.’ Naronim. Fools! They think Adonai is listening to them. Just like he listened to them in Auschwitz. Your mother told me I shouldn’t eat in front of them, but let them see me. God let that they should be in Auschwitz, and now they fast more for Him!” To my father, these Hungarians were betraying justice by not holding God accountable.

As my family’s “Memorial Candle,” the child in a survivor family whom the parents unconsciously designate as the one to carry on the memory of the Shoah, I identified so strongly with my father that I had always done as he did, and ate on Tisha B’Av, until one year, after many therapy sessions, I had what seemed to be the most remarkable epiphany: I wasn’t in the camps; that was my father. God didn’t owe me. Post-epiphany, when Tisha B’Av came around, I had no reason not to fast anymore. I gave it a whirl and kept the fast for a couple of years, but it never felt right. I couldn’t get rid of the image of my father at the table, doing his best to overeat.

It wasn’t too many years l before I started to go easy on myself on Tisha B’Av. I came up with lots of excuses to eat and drink.

“It’s July! I need water. I might get dehydrated.” “Well, if I have water, I may as well have juice, because I’m getting a little dizzy.” “If I’m dizzy, I should eat something. Like that cookie.” “Well, I already ate the cookie, so — ”

But it wasn’t hunger or thirst that made me eat; it was a sense that I was being disloyal to my father. “My father fasted enough in the camps,” I found myself thinking. “You don’t deserve it, God!”

Eventually, I came to a compromise: I fast for half a day in recognition that it’s my obligation as a Jew to mourn the destruction of the First and Second Temples, and I don’t have my father’s excuse. Half a day I eat, because even though I understand that my father’s experience isn’t my own experience and I don’t need to, and shouldn’t act as though it were, in the end, epiphany or no, I’m still my father’s daughter, and so I eat. Davke, I eat, so God should see and know He’s not being let off the hook, and so that my father, whose 10th yahrzeit just passed, can see, too.