How A Two Thousand Year Old Remedy Cured My Daughter 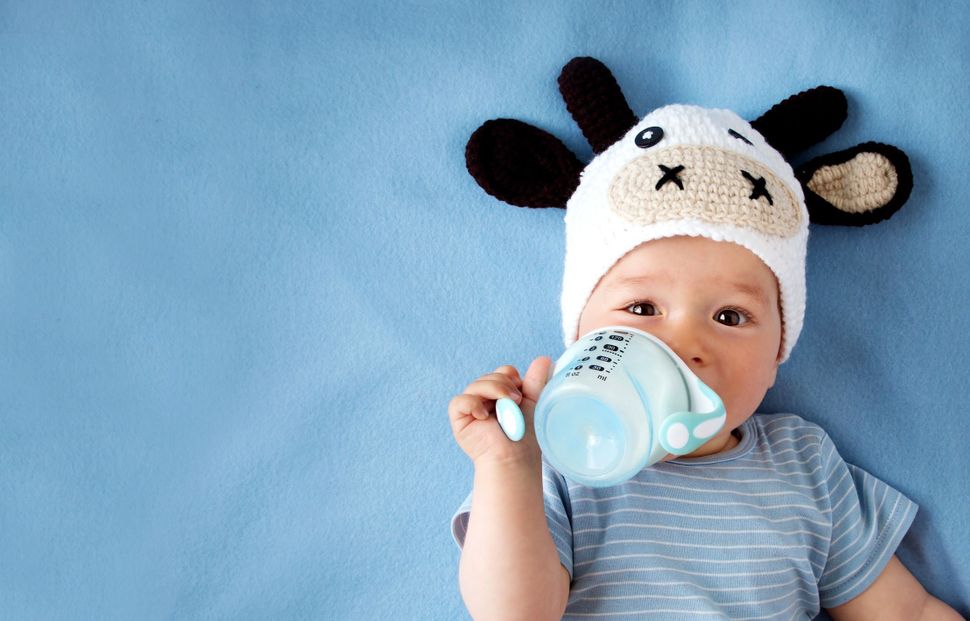 “The only remedy for your baby is fresh goat’s milk,” the doctor told me.

I looked at him incredulously and then put my daughter back in her stroller to hike up the hill to the old leprosy hospital, now an arts and media center in the heart of Jerusalem’s Talbiya neighborhood.

My 18-month-old daughter was home sick for a full week last month, screaming and writhing in pain. She refused all food, her gums bled whenever I touched them, and she had cold sores on her tongue. When I took her to our local Jerusalem doctor on Sunday morning, he diagnosed her with a virus and told me there was nothing to prescribe. “You really just have to wait it out. She should be better in 7-10 days.” My jaw dropped. Seven to ten days of this agony?

“Is there really nothing I can do?” I asked him desperately.

“Well,” he told me, “There is one proven remedy – you can give her fresh goat’s milk to drink. That works like a charm.” I looked at him like he was crazy. “Goat’s milk? Can I get that at the supermarket?”

“You can,” said the doctor, “But what you really want is the unpasteurized kind, and that you can only get from a farm. It’s best if they milk the goat for you, and then she drinks it right away, while it’s still warm.” I couldn’t really believe that my daughter’s recovery would come from squeezing the udders of a goat, and so I ran down the block to the pharmacy, where I was told the same thing. “Take her to a goat farm, and get her some fresh milk.” On the one hand, my heart was sinking – was there no other way to help my child? On the other hand, my mind was racing – now I was finally beginning to understand a Talmudic story that had long baffled me.

The story appears in a passage about the prohibition on raising “small animals” in the land of Israel, namely goats and sheep, since these animals are prone to pasture everywhere and thus destroy the surrounding vegetation. However the Talmud goes on to explain that it is permissible to raise “large animals,” even though these are also bad for the land, because they are too unwieldy to import, and “we do not impose a decree on the public that the public cannot uphold.” (The same Mishnah forbids keeping a dog unless it is on a leash – this prohibition is clearly one the public could not uphold either, judging from the free-roaming pets in our neighborhood.)

The Talmud then relates a story about the pious sage Rabbi Yehuda ben Bava, who was “groaning from his heart,” that is, moaning in severe pain. His friends asked the doctors what to do, and they responded, “The only remedy is for him to drink warm milk straight from a goat every morning at dawn.” So they brought him a goat and tied it to his bedpost, and he would nurse from it every morning.

One day, Rabbi Yehuda ben Bava’s rabbinic colleagues came to visit him. When they saw that he had a goat tied to his bedpost, they recoiled in horror; how could such a pious man so brazenly override a rabbinic prohibition? When he eventually died, the sages reviewed his life’s actions and discovered that this was the only sin he had committed. Rabbi Yehuda is reputed to have said on his deathbed, “I know that I did not commit any sins except the sin of that goat, since I transgressed against the words of my colleagues.”

I used to read this story and wonder what illness this man could possibly have had, such that goat’s milk was the only remedy. I wondered what we’d call that illness today, and how it would be treated in the twenty-first century. Evidently it was the very same illness as the father in S.Y. Agnon’s “Fable of the Goat” (first published in 1925), which begins with the same words as the Talmudic story: “There is a tale of an old man who was groaning from his heart. They went and asked the doctors what to do…” This man, too, ties a goat to his bedpost and suckles its milk, which is sweeter than honey from the Garden of Eden. The goat periodically wanders off for days, and so the man’s son decides to tie a rope to the goat’s tail and follow her. The goat leads the son into a cave that miraculously transports him—much like C.S. Lewis’ wardrobe or J.K. Rowling’s platform Nine and Three-Quarters—to the mythical land of Israel. The son writes a note to his father instructing him to follow the goat and sticks it behind the animal’s ear. But when the father espies the goat returning alone, he assumes his son is dead and slaughters the goat, only to discover the note. The way back to his son and to the promised land is tragically lost to him forever. At this point, the father’s physical ailment is presumably the least of his troubles. But at least now I finally knew what it was: He, like Rabbi Yehuda ben Bava, had the same cold sores as my daughter, and the remedy in the twenty-first century is the same as it was back then.

After several days of attempting to forcibly squirt pasteurized goats milk purchased at my local supermarket onto my daughter’s tongue, I decided I needed to take bolder measures. I went around to a few natural health stores in my area, but none sold unpasteurized goats milk. Then a friend mentioned that there was going to be a farm-to-table festival at the old Jerusalem leprosy hospital, which served as an asylum and treatment center for patients with Hansen’s Disease (the medical term for leprosy) from 1877-2000 and which has recently been repurposed as an arts and media center. The building, a sprawling two-story stone structure set in a walled compound in the Talbiya neighborhood, has a rambling overgrown yard that reminds me of the grounds of Misselthwaite Manor in The Secret Garden. It’s not far from my home, so I buckled my wailing baby into her stroller, put on my wide-brimmed hat to shield me from the fierce July sun, and hiked up the hill to Hansen’s, where I found a few teenagers setting up folding tables and putting out jerry cans. “The festival?” they responded. “That doesn’t start until next week. But if you need goat’s milk, why don’t you try the petting zoo at the school down the block?” I wiped the sweat from my brow and tried to console the baby as we continued on our wild goat chase.

By this point I felt as if I, like the son in Agnon’s fable, was just holding on to the rope attached to the goat’s tail and letting it carry me along for the ride. When we reached the school, I spotted the goats in the yard.

“Can you help?” I asked the guard at the gate.

“You have to ask Shlomo, and he just stepped out for a few hours.” My face fell, the baby howled, and the man looked at us with pity.

Ihmed appeared, a strapping dark-skinned man who looked like he just might be a father. He reached down to pat my baby’s leg and smiled at her with a twinkle in his eye. “Who told you we have goats here?” Perhaps he didn’t want to let me in on his secret – that he was raising “small animals” in the land of Israel.

“They told me at the leprosy hospital,” I confessed.

“Follow me,” he said. I parked the stroller outside a classroom, picked up the baby, and continued to follow the proverbial rope attached to the proverbial goat’s tail. We entered a smelly yard filled with scattered straw, clucking hens, and bleating goats. Ihmed called his friend Hassan, who held onto the head of his goat.

“Do you have a bottle?” he asked me. I emptied out the water from the baby’s sippy cup, and he held it under the goat’s udder. My daughter, who loves animals, forgot her groaning heart and began squealing in delight. I thanked Ihmed and Hassan profusely, retrieved my stroller, and gave the baby her sippy cup. She drank. She grew quiet and fell asleep.

Was it a miraculous cure? That night she slept much more soundly, and when she woke up the next morning, she agreed to eat cornflakes (with goat’s milk, of course)—the first solid food she’d eaten all week. And so it may be true that the milk she imbibed, like the milk in Agnon’s fable, had its source in the Garden of Eden.

In any case, I told myself that if she ever has a relapse, I’ll stop at nothing short of tying a goat to the post of her crib and giving her warm milk at dawn.

Ilana Kurshan is the author of If All the Seas Were Ink, a memoir of Talmud study published by St. Martin’s Press.

How A Two Thousand Year Old Remedy Cured My Daughter