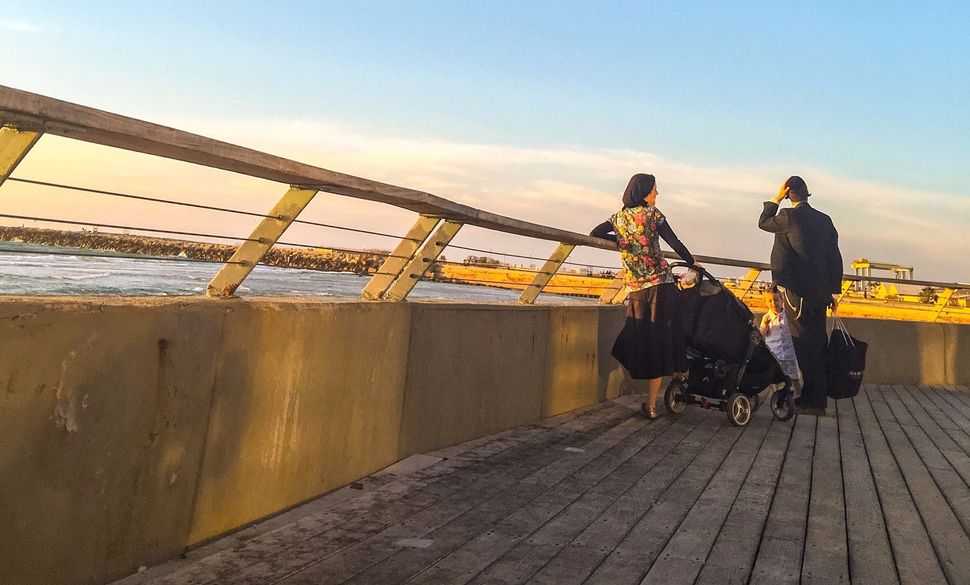 One of my biggest pet peeves about how the media often portrays Orthodox Jews is its use of the overarching term, “ultra-Orthodox.” The photos that accompany articles about “ultra-Orthodox” Jews are typically of women in thick stockings, short wigs and little hats pushing strollers in busy intersections in places that look like Boro Park. Men with beards and hats and curled sideburns rushing hurriedly down the sidewalk.

Whether the article is about Orthodox lifestyle or belief, Orthodox people are typically viewed by the general media as “ultra-Orthodox.” Except the Maccabeats, of course, with their knitted kippas and cool covers of pop songs – they are “Modern Orthodox.”

But what about the rest of us that fall somewhere in between?

Humans have this tendency to feel safe with labels. Republican. Democrat. Independent. Reform. Conservative. Orthodox. Labels give us a sense of belonging and identity. Being somewhere in between isn’t a comfortable place, for we cannot just attach ourselves to one particular belief or practice and say, “Yes, that’s me. And I’m good, because this is where I fit.”

In Orthodox Judaism, there are certainly many labels, and each one for good reason.

Some labels identify your lineage, such as Ashkenazi, Sephardic, “Litvish” (Lithuanian), Lubavitch, Chassidish.

Then there are the “colloquial” labels, those that only insiders use: right of center, left of center, open-minded Yeshivish, Carlebach, black hat, knitted yarmulke, and heimish.

There are other labels that even have “lite” attached at the end, such as Modern Orthodox-lite or Yeshivish-lite, which indicate the person really belongs to that camp, but is “chilled”.

Unfortunately, these various distinctions make it hard for those outliers who chafe at labels and for people who like to pick and choose. Where are the people who formally celebrate Israel Independence Day (a Modern Orthodox thing), who only eat dairy products that are certified “cholov yisroel” (an ultra-Orthodox thing), and who read the early Hasidic work, the Tanya (a Lubavitch thing)? Do these people even exist? And if so, can we become friends?

If you absolutely had to put a label on me, it would be a challenge. I hover somewhere between Centrist, open-minded Yeshivish and Yeshivish. Whatever that means. And, together with my husband, we are raising four beautiful Jewish children confidently within our outlook and confident in our place in our “pretty Yeshivish” community.

If you would see our family walking down the street on Shabbos, like so many other Orthodox Jews, this is what we would look like: My husband and my 14-year-old son are wearing black hats, dark suits, white shirts and ties. I am wearing a sheitel; it is stylish, but it is still a wig. My 7-year-old son is wearing a kippah, white dress shirt, and dark pants. My two daughters, 12 and 5, are wearing Shabbos outfits, with my older daughter covering her knees and elbows.

Now, for those not in the know, they might call us “ultra-Orthodox.” After all, the men in the family are wearing those black hats. The woman is wearing a wig and stockings.

For me and my family, that term isn’t accurate at all. It is weighed down by too many constricting, uncomfortable stereotypes: the uneducated, extremely devout Jew who is lives in a bubble, has no idea what is going on in current events, politics and contemporary culture, and is often confused with Amish people.

But this is what others may not know, when they see my family walking in the street:

My husband is an internist in one of the top hospital systems in the country. After spending five years in rabbinical school where he received his ordination, he went on to the University of Maryland Medical School and then one of the finest residency programs for internal medicine. In fact, during one of his medical school interviews, the interviewer stood up when he entered the office and said she was honored to be interviewing the first rabbi apply to apply to their program.

The wonderful truth is, he isn’t an anomaly. There is actually a pre-med and pre-dental program at the rabbinical college he attended for students who find their calling in medicine. And our community is filled with plenty of doctors, and a variety of other professionals, who are “black hat”. Not to mention the variety of female professionals who grace our community.

I have degrees in English and Jewish education, taught English literature and Judaic Studies for 14 years, and publish articles on various Jewish blogs about contemporary Jewish issues. I was educated in both Modern Orthodox and Yeshivish institutions. In many ways, I straddle the fence. So, I’m making up a new label: I’m Contemporary Orthodox.

I’m contemporary because I embrace many of the beauties this world has to offer. My appreciation for the best of the secular world is part and parcel of who I am.

I’m Orthodox in that I view this world through the lens of the Torah. If the world offers something seemingly valuable that is in contradiction to Jewish law or belief, I turn it down. Or at least I try my best. It isn’t always clear cut and there is always the nudge of nuance, but this is the life I love to lead.

I’m contemporary because I live in this world, engage in this world and don’t want to raise my children to be afraid of this world. I want them, too, to see the world through the lens of Torah and to learn to filter out the bad and keep the good, and certainly not to ever throw away the baby with the bathwater. I want to teach them to be firm in their beliefs, to know where they stand, and to never be afraid that the attractions of the secular world, the ones present a challenge to their Judaism, are stronger than what they have.

I’m Orthodox because I am dedicated to halacha, Jewish law, in that it is literally the “way” that guides my life, spells out my obligations, and enables me to serve G-d according to the Torah’s dictates and principles. I strive to grow spiritually and refine my commitment to mitzvot between man and man and between man and G-d. I seek advice and direction from my rabbis, who have a far greater breadth of knowledge in Torah law than I do. And I understand that halacha will prohibit my engagement with certain aspects of the world around me, and that’s okay. Dedication and consistency to Jewish law and living is what has maintained our identity throughout the centuries before us. And the next generation starts with me.

Looking closer, “contemporary” is the modifier of the adjective “Orthodox”. And “Orthodox” is the adjective to the noun, “Jew”. Because at the root of it all, that is what really matters. The timeless designation “Jew” is what unites us as a people and what makes us a family – beyond the labels.

Alexandra Fleksher holds a M.S. in Jewish Education from Azrieli Graduate School of Jewish Education and a B.A. in English Communications from Stern College for Women. Her essays on contemporary Jewish issues have been published in various blogs and publications including Cross-Currents, Hevria, Klal Perspectives, Torah Musings, and The Five Towns Jewish Times.