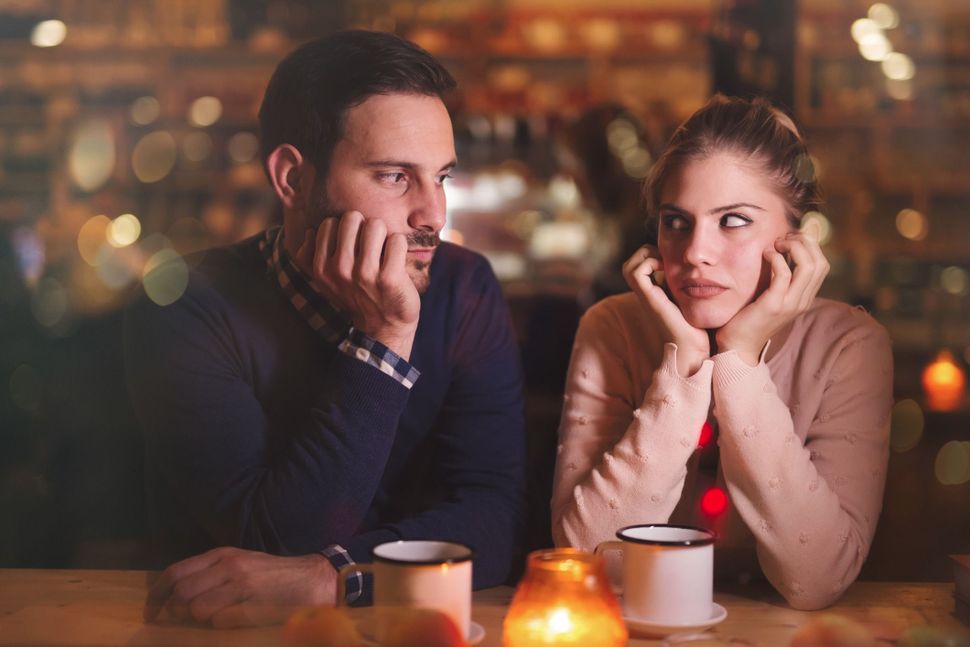 Not too long ago, there were many reasons for a Jewish single to disqualify a potential match: Too short, too tall, not ready for marriage, too marriage-minded, too religious, not religious enough.

But ever since Donald Trump rode down that escalator in his gilded tower, dating has grown exponentially more complicated.

Jenna Glatzer, a 41-year-old author and single mother living on eastern Long Island, says, “I have a simple ‘No Trump Supporters’ rule, which makes it even harder since 65 % of the men out here voted for him.”

In a survey conducted in February 2017, the majority of the 1,320 users of the matchmaking app Coffee Meets Bagel admitted that politics is impacting their dating life. Singles identifying as Democrats were the most “profoundly” affected (70 %), while only 43 % of Republicans felt a vote for Hillary was an instant libido-dampener.

Melissa Schorr, editor of the Boston Globe’s ‘Dinner with Cupid’ column,which sets up blind dates among local singles, routinely receives directives such as “Please for the love of God do not match me with a Trump supporter.”

It’s not shocking that the highly polarized political climate, which has roiled, and in some cases crushed previously rock-solid friendships and marriages, has cut through the already-delicate dating process. Successful relationships are about communication, trust, common core values or at least a respectful acceptance of differences: qualities that seem to be turning as quaint as a landline.

“While I always preferred to date someone with similar political leanings, it never meant so much to me until Trump appeared on the scene,” said 25-year old Sarah Muller. “I immediately made it clear on my online dating profile where I stood.” Muller, who is a professional fundraiser living in Massapequa, NY, added, “If a guy’s Instagram account is linked to his dating profile, I’ll search for pictures that might indicate his political preference.”

Trump voters often do the same digging. “Recently a user on J-Swipe messaged me to show his displeasure that I don’t like Trump,” Muller said. “He wrote, ‘All Zionists should support Trump!’ I wrote back, ‘I don’t. We’re not a match.’”

Muller is wary about dating in this charged climate. “I have so few deal breakers. Trying to find someone Jewish and liberal is pretty hard.” For some, the emotional maelstrom arising from the now-chronic political toxicity was a final straw in a relationship between two political opposites.

“There were issues we agreed on, and we avoided talking about the ones we didn’t,” the New Jersey digital marketing coordinator said. “But once politics were at the forefront of every social media outlet, it ended up consuming us.” The couple became embroiled in political discussions for months on end, and Jeffers discovered that her partner “thought the women’s march was dumb, and didn’t believe in the pay gap or women’s right to birth control.” Suddenly differences that were shoved under the rug became litmus tests. “I was getting older and starting to think about the rest of my life.” Jeffers is on dating sites actively searching for politically compatible men. “You can’t change anyone’s opinions when they’re very deep rooted.” “For me it’s a matter of morals, not politics,” said Jenna Glatzer. “I see the [Trump] Red Hats on a dating site, and I say, ‘Forget it.’. I want to be with someone who shares my sense of decency and humanity.”

And the feelings are in no way one-sided. Julie Colon, a 57-year old lawyer and Trump voter living in Baltimore, counters that Jewish single liberals can be equally extremist and dismissive. “I’ve been on a few first dates where the person is so fanatically anti-Trump, that I want to defend the President even though I only voted for him because I didn’t like Hillary.”

She is willing to have political conversations about issues such as the single payer system. However, when liberal dates go off on political tirades Colon gets the same feeling as when a man she’s just met explodes about his ex. “I wonder, ‘Will I be next?’”

Colon is disheartened that on JDate, Plenty of Fish, and Bumble, profiles warn: ‘Don’t even message me if you like Trump.’

Sighing, she says, “I could be their bashert, but they don’t care.” A self-described “moderate,” the lawyer feels trapped between two immovable forces. “It’s also a problem when I meet someone so pro-Trump that he is blind to awful things the President does.”

In an ideal world, Jewish singles would not be stereotyping other Jews as intolerant at first glance. But when Jewish matchmakers get comments like, “I’m liberal and open-minded….so someone who voted for Trump probably wouldn’t make a good dinner date,” the situation does seem pretty hopeless.

“The key is not to get personal about the other side’s opinions but to use your passions to fuel intellectual discussions,” says Rafael Hope, who writes for the Jewish lifestyle blog amenvamen.com. “If you stick through the initial feelings of discomfort, you might end up discovering commonalities and positive traits.”

For now, though, as political tensions continue to be at an all-time high, singles like Sarah Muller, the 25-year-old liberal fending off Trump voters on J-Swipe, will feel discouraged. “I’ve got my apartment, a career,” she says. “Why do I need this additional drama?”

Sherry Amatenstein is a NYC- based couples therapist and author of books, including the anthology “How Does That Make You Feel? True Confessions From Both Sides of the Therapy Couch”