Does The Torah Obligate Us To Judge Trump Favorably? 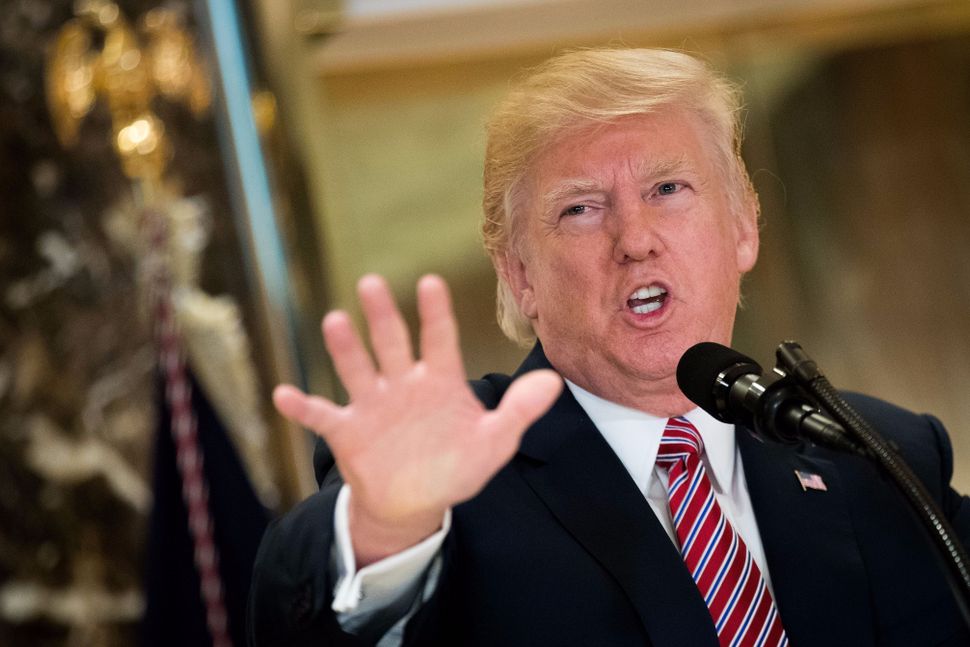 US President Donald Trump speaks following a meeting on infrastructure at Trump Tower, August 15, 2017 in New York City. He fielded questions from reporters about his comments on the events in Charlottesville, Virginia and white supremacists. Image by Getty Images

The great Levi Yitzhak of Berditchev was known for his love of Jews and his refusal to denigrate another. It is told of him that once, on the morning of Yom Kippur, he saw a man smoking outside the synagogue. Yitzhak approached the man and said, “Surely, my friend, you do not know that it is Yom Kippur today?” The man said yes, he knew quite well.

“Well then,” the rabbi continued, “Surely you don’t know that lighting a fire and smoking on Yom Kippur is forbidden?”

The man again said yes, he knew quite well.

The rabbi then looked up at the sky and cried out: “God, is this not wonderful! Your people are so honest that even when they have the chance, they refuse to lie!”

We are living in the age of snark.

Jewish law is not naive. Although it tells us to judge people favorably, that admonition is balanced by very careful considerations about when someone has forfeited the right to the benefit of the doubt. One has to be scrupulous. It is not a simple matter to give up on the potential goodness of another. Even when people are known to be of dubious character, some sages insist that we should search for a worthy explanation for their statements or behavior.

No such benefit and little such nuance exists in public discourse in our country. Public figures are presumed — at least by those who oppose their views — to be venal, dishonest or corrupt.

The ideal of “dan l’kaf zechut” (Shevuot 30a) – judging people favorably – is not a cherished one on social media or in print.

As our sages note, this has effects not only on the individual, but also on the very fabric of society. Mistrust and mean-spirited arguments are corrosive to the community as a whole.

So the cascade of attacks on politicians, including the president, has to be calibrated more carefully than tossing off simple slurs. Invariably, people who dislike public figures will say these figures have, by word or conduct, forfeited the right to be judged favorably. Not only do we cherish our prejudices, we like our assumptions confirmed and we love to be right.

But while we have an obligation to see people as we see paintings — in the best light possible — that mitzvah has to be weighed against a different one, the mitzvah of rebuke: “You shall surely rebuke your neighbor” (Leviticus 19:17).

Paradoxically, rebuke is intended to serve the same function as thinking well of someone.

It is a corrective, a cleansing, an attempt to promote peace. The sages notice that Abraham and Abimelech made a covenant of peace only after Abraham rebuked him (Gen. R. 54:3). Even more powerfully, if you do not rebuke your neighbor, according to Ramban, you bear some of the sin yourself (Ramban on Lev. 19:17).

Silence, in essence, is complicity.

Therefore it is both an obligation to be generous when one can and an obligation not to shy away from rebuke when it is warranted.

Yet practically, how does one balance these two obligations, to judge favorably and to criticize deservedly?

For one, rebuke is not snark and it is not fury. Thunderous denunciations of public figures will never sway supporters or move the figures themselves. The approach of our sages is to be careful, be thoughtful, and be clear.

In this time in American history, the automatic reaction to the appearance of the swastika, to chants of “Sieg Heil”, to the reappearance of a now hoodless Klan must be immediate, unqualified and absolute condemnation. These marchers identify with and venerate the mass murderers of our people. They hold aloft the flag under which millions were slaughtered and millions more had their homes and lives and loved ones stolen from them. These are the people who turned the world into a charnel house, who murdered children with monstrous glee. These are the people who plunged an entire world into war and who are responsible for the death of almost half a million American soldiers.

Here, there was no room for judging favorably.

For the President of the United States to refrain from such instant condemnation was soul-crushing. How could we live in a nation whose leader would wait, finally condemn, equivocate (“What you call the ‘alt-right’,” he said to a reporter), and insist that some who marched alongside Nazis are “very fine people”? How could he listen to an American Nazi ask how his beautiful daughter could marry a Jew and not scream out in protest?

Each Shabbat, when I stand before my congregation, I face several community members who have numbers tattooed on their arms. To these Jews, a Nazi is not an abstract entity or a remote ideology; it is a very real person who enslaved them and killed their family. To anathematize those who march under a Nazi flag is as much of a reflex as breathing, and to rebuke those – President or others – who do not condemn instantly, absolutely – is a commandment of the Torah and an expectation of decency.
Two days after the President’s ‘on-the-other-handedness’, Merton Schwartz, a 92 year old WWII veteran with a bronze star, came to my office to marvel that Nazis, who would be forbidden by law to march in Germany, could march freely in the streets of America and not be instantly declared as beyond the pale.

We do not have windows into each other’s souls. The President’s private beliefs are not accessible, however much people believe they know. We are often unaware of our own wellsprings of motivation, yet speak with great confidence about the inner lives of others. Generally, we strive to judge even the most public and controversial figures favorably.

But in this case, it does not matter.

In this case, rebuke is necessary, and the generosity of silence is wrong and even dangerous.

To quote the late Eli Wiesel: “I am obsessed with silence because of the silence of the world. I do not understand why the world was silent when we needed its outcry. I always come back to that problem. Where were the humanists, the leaders, the liberals, the spokesmen for mankind? The victims needed them.”

In this dark moment, we needed to hear a leader’s voice. And for that failure, the Trump administration should perhaps consider another Jewish mitzvah – that of teshuva, repentance.

Does The Torah Obligate Us To Judge Trump Favorably?