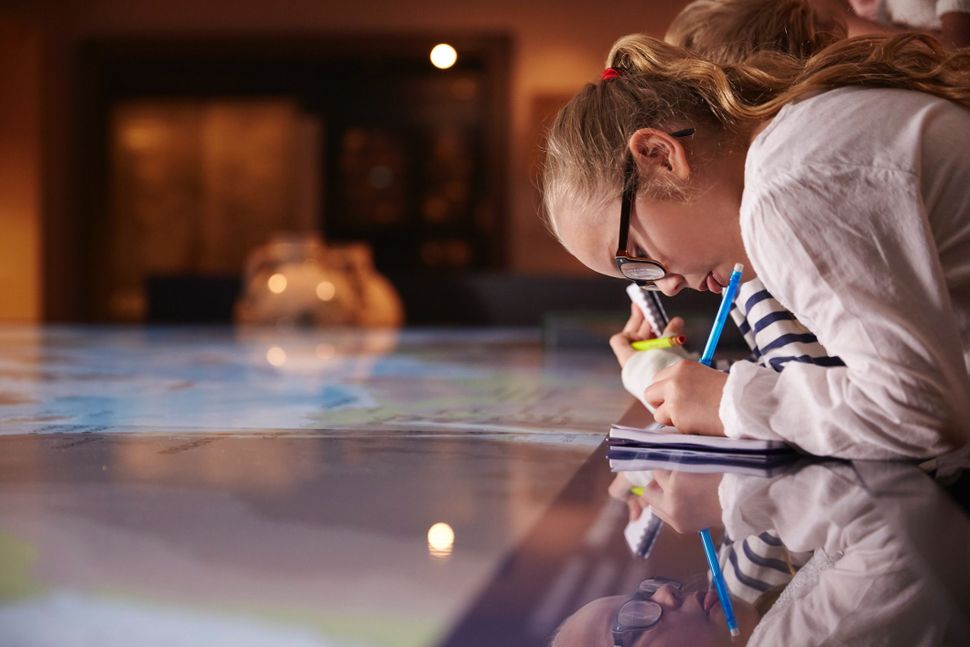 The sheet was purple.

The title, written in the typeface Comic Sans, was “Ethnic & Family Heritage Social Studies Unit.” The sheet explained that the students would be exploring their “family’s ethnic heritage and the cultural diversity found in our world.” It went on to ask our daughter to list the countries her ancestors were from.

My chest tightened along with my jaw, my shoulders and most of my back.

Earlier in the year, each student in my daughter’s social studies class had studied a different state. She picked Maryland out of a hat. As Pennsylvanians — and avowed Pittsburgh Steelers fans — studying Maryland allowed for some funny conversations. We took an impromptu day-trip to Baltimore to go to the American Visionary Art Museum, play at the playground on Federal Hill and count the different, colorful license plate options in Maryland.

But this was not that.

The pedagogical issues with using ethnicity and national origin interchangeably aside, we had a real, practical problem. My daughter’s ancestors come from (on my side) Russia/Poland and Latvia, and (on my husband’s side) Poland, Lithuania and Austria.

After a discussion of why she might chose each country, my daughter picked Austria because, “That’s where ‘The Sound of Music’ was.”

Now, how to talk to her about the pogroms?

I wrote an email to her teacher:

“[Our daughter] has decided to study Austria…. We’ve talked to her about the fact that Austrian culture…is not the same as Central European Jewish culture, which is her family’s history…. If the assignment is to study a country her relatives came from, Austria it is, but if it’s to study her own heritage and culture, then Central European Jewry would be more appropriate.”

I inquired about what sources the second-graders would be using in hopes that it would subtly and respectfully point out that a modern study of Austria would not reveal my daughter’s heritage. I was purposefully nonconfrontational in hopes of hiding my actual fury. I think that’s called being “passive-aggressive,” but trying to bring awareness to differences without ostracizing my own kid is a fine line.

I did not hear back from the teacher, so I followed up a week later and received this response: “We are studying a specific country…. So Austria is perfect.”

After a lot of conversation with my husband and some trusted friends, I responded:

“Based on the paper, I understood the project as an “ethnic/culture/heritage” exploration of the student’s own background, in which case Austria wouldn’t make much sense for [our daughter] or our family (unless we’re ready to tackle what it means to be forced out of one’s homeland with second-graders!).”

No, the teacher wrote, “I would not want to have that conversation with her either.”

The teacher may have been able to avoid that truth, but my husband and I weren’t about to.

I explained to my daughter that just like she would celebrate Passover in a few months while everyone else in her class would celebrate Easter, her relatives in Austria were different from the people around them. She brushed me off with the perfect display of annoyance that only a 7-year-old who thinks she’s 17 can manage.

Which is how my Jewish family ended up with a large poster in our house listing random facts about Austria, including the country’s featured holiday, Christmas.

Part of the justification I got from my daughter’s teacher was that the assignment felt more relevant to the students if they had a connection to the country they were studying, and that “picking a country from their heritage helps them see the world as a smaller place.” But this smaller world didn’t have a place for my daughter, or if it did, it was a place where her ancestors fled under the threat of extinction. And what about African-American students who may not be able to trace their country of origin, or students who are adopted themselves or have adopted parents?

Raising children has become a perfect loop in which I face my own past in frequent and unexpected ways. I grew up a secular Jew in the 1980s. I was taught I was an American first and a Jew second. When I met my husband’s Conservative Jewish family, I realized how little I knew about my own religion. Sure, my mom made brisket on Rosh Hashanah, but we didn’t spend our day in synagogue. I hadn’t had a bat mitzvah. It seemed my Judaism was a given that gave me nothing. It was my background and it was in the background.

After college, when I began working in professional Jewish settings, I often lamented the fact that I couldn’t speak Hebrew and blamed my parents for making choices that left me with such a deficit. Was I going to repeat those mistakes with my own children, or would I use this project as a moment to over-correct?

In the wake of the horrific events in Charlottesville,Virginia, Billy Joel, a famously secular Jew, donned a yellow Jewish star at a recent concert in Madison Square Garden, but he’s an adult who made that choice for himself. Was I going to press the issue and force my daughter to wear her Judaism more loudly than she wanted to? And if I cared so much about this, why didn’t we belong to a congregation, and why wasn’t my daughter in Hebrew school? Much like the character on “Seinfeld” who is “Jewish for the jokes,” was I trotting out my Jewishness for the righteous indignation?

And yet. And yet, every time I look at the poster with my daughter’s drawing of the Austrian flag and “Christmas” written in her little-kid handwriting, I’m reminded of our “otherness.”

I am not qualified to weigh in on the debate as to whether Judaism is a religion or a culture, nor can I wrap my head around whether Jews are white. But I do feel the need to help my daughter to see her world clearly. Her second-grade teacher won’t have to have a conversation about the Holocaust with her, but eventually, I will.

As I write this, another summer is coming to a close under a shadow of violence against black and brown bodies, against Jews and Muslims, against anyone whom white nationalists determine to be undesirable and those who stand with the marginalized. The pain my kids might feel as “other” pales in comparison to what we’ve witnessed, and yet, if their pain ends up being anything like mine, it will be real. I will continue to teach them about their past and the present and hope upon hope that they will use what gifts they have, and privileges they haven’t earned, to make the world a more inclusive place.

Jamie Beth Cohen is a writer, storyteller and community organizer who has a full-time job in higher education, and a family she loves very much. Find her tweeting about her (in-progress) YA novel at @Jamie_Beth_S.