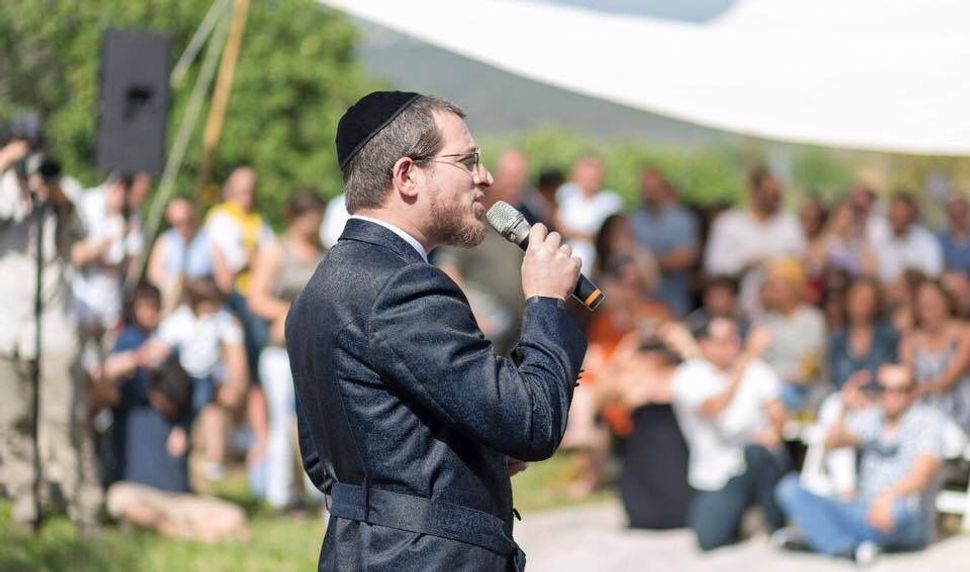 Menachem Bombach is waiting behind the gate outside his school building on a dusty hilltop: long black coat, short beard, thin-rimmed glasses, the look of a refined yeshiva student, hands folded in front of him. He smiles and says, “Welcome, welcome!”

It’s hard to believe that this gentleman’s home has become the site of frequent demonstrations by religious zealots. His apartment door and lock have been smeared with tar several times; his neighborhood was covered in pashkevilim, posters, denouncing him as a Haredi imposter and calling on him to “return to Tel Aviv.” And when he was recognized upon a visit to his childhood neighborhood Mea Shearim, locals threw bottles and diapers at him, tearing off his yarmulke.

Bombach has faced this sort of protest ever since he first opened his school in Beitar Ilit three years ago — a high school for Hasidic boys that teaches math and science, and offers bagrut matriculation, exams. While this model has always existed in the Haredi Lithuanian community, though on the margins, this school is the first of its kind in the Israeli Hasidic world, and it’s quickly beginning to attract attention from prospective parents.

Beitar Ilit is a colorless metropolis rising out of the Judean Hills, a settlement-city 10 kilometers south of Jerusalem with a rapidly growing population. With rent a fraction of the Jerusalem rate, Beitar Ilit has attracted both Hasidim and Lithuanian Haredim alike, desperate for space to accommodate their growing families. Walk down Rabbi Akiva Street, and watch the perpetual rush of the crowd, fathers in long black coats and black hats, mothers in headscarves and stockings, more strollers than cars, boys with curled side-locks and girls in long pleated skirts.

The zealous demonstrators, Bombach explains, are not Beitar Ilit locals. They’re imports — either residents of Beit Shemesh, who originally came from Mea Shearim, or Lithuanian Jerusalemite Haredim, who are affiliated with Rabbi Shmuel Auerbach. Nothing is truly monolithic here.

But he pays the protesters no attention. “They don’t worry me,” he says. “After all, it’s thanks to them that many more people know about me!” He waves his hand, as if to dismiss the shouts echoing in his mind, and smiles calmly. “Anyways, they keep me on my feet, they’re a constant watchdog, they keep me accountable for my actions.”

Despite his innovative thinking, Bombach is no outsider.

Raised in Jerusalem’s Mea Shearim, with a Satmar Hasidic father and a mother from a zealous Eda Haharedit family, Bombach did not speak Hebrew — only Yiddish — until he turned 20. After studying in a local heder, he went on to study in the Yeshiva Ktana of Vizhnitz and then at the Lithuanian Mir Yeshiva. When he married at the age of 20, he left yeshiva and eventually turned to education: He moved to Migdal Haemek, where he started as a counselor at a boys yeshiva, and within four years became vice principal. As his children grew, he sought a more Haredi environment for his growing family, so he moved to Beitar Ilit, where he began working in a yeshiva for Russian immigrants. It was here that he began to dream of opening his own boys high school.

Tapped by an administrator at the Mandel Institute’s program for leadership development in the Haredi community, Bombach completed the institute’s leadership training program (of which he is now a senior project director), and then went on to complete a degree in public policy at Hebrew University, where he picked up a fluent English as well.

His dream was to open a school for Hasidic boys that taught secular studies — a radical idea in this insular community. And three years ago, he finally launched it, calling his project “Hamidrasha Hahasidit”: Not a “yeshiva,” but rather a Hasidic “academy.” The curriculum includes the usual schedule of hours spent on Talmud, the Bible, Halacha and Hasidic thought — coupled with a packed schedule of classes in English, mathematics, literature, Hebrew language, computer science and history. Students are prepared to take the bagrut, Israeli matriculation exams required for university entrance — a contentious issue in the community, with many Haredi rabbis virulently opposed to religious youths taking the exam at all. 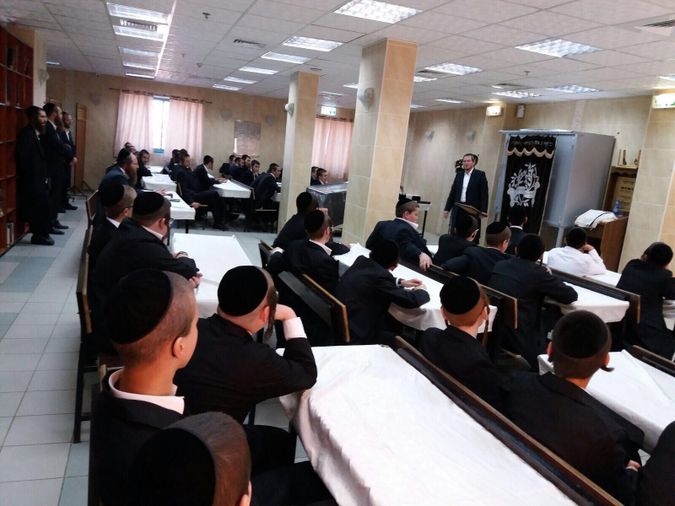 The school, however, is entirely in line with Haredi societal norms: Teachers are all male, all Haredi or Hasidic. Eventual army service is not discussed, and the school does not recognize Israel Independence Day — though Bombach says the students do pray for fallen Israeli soldiers on Memorial Day.

But this program isn’t just about secular studies, he says. “It’s teaching them to be mensches, productive citizens of society. Not to reject others.”

But how does one teach this, practically?

You have a website? I am stunned. In a community where the internet and smartphones are purportedly forbidden? What Israeli Haredi yeshiva that wants to be taken seriously has a website?

He gives me an amused look. “Of course I have a website,” he says, and opens a sleek, well-designed page on his desktop. 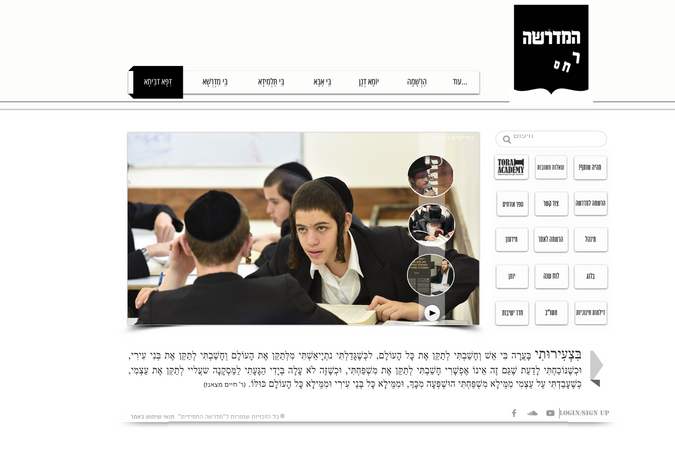 Looking at the analytics, Bombach says 600 people enter the site daily to access information on education, parenting and recordings of lectures: “I think it’s becoming a resource for people, even those outside our school.”

But most community members don’t have internet, I counter.

“People ask me for information, and I tell them, go to my site,” he says, simply. “They tell me they don’t have internet access. So I tell them, find a way to get internet. I don’t have time for these games. I’m very upfront.”

When Bombach opened Hamidrasha three years ago, the protests, the angry articles and denouncements, were almost immediate. But so was the demand.

Quietly, inquiries began to pour in. Parents were curious about this experiment.

Bombach takes only 20 students per year; for this incoming fall, he says, there were 80 applicants for the 20 spots available. Half of the students are local, the rest are from all over the country and live in a dormitory nearby. About 60% of the funds come from the state, and the rest from foreign donations.

‘There Is No Alternative’

Just this past week, after an article on Bombach appeared in the Israeli magazine Makor Rishon, the Haredi daily Yated Neeman blasted him as a “spiritual murderer.”

I ask him how it felt to be shamed in what is the most widely read paper in the Haredi Lithuanian community.

“I am blessed to have support from others,” he says. “But in the end of the day, one must accept that one is alone. I am always walking on eggs.”

“Most people tell me I’m making a mistake,” he says. “They tell me that I have to work ‘under the radar’ [to improve my community]. But I say that the radar is very, very high. Even if I work under the radar, people will see me. It’s inevitable. People are just suspicious by nature. But listen, Yated is the past. What I’m doing, this is the future.”

Bombach is deeply concerned about the next generation of his community. Between the ages of 0-14, there are approximately 500,000 Haredi children in Israel today, he estimates.

“If they don’t enter the workforce, we will become a Third World country,” he warns. “And the Haredi world will be the first to suffer for it. It’s hard for Haredim right now to understand how this can be. But there’s no alternative. From here, we will have the future heads of hospital wards, engineers, high-tech companies, scientists in the service of the public. I really believe it. “

“Haredi society is a very good society,” he explains. “There is so much idealism here, it is truly a world of chesed [acts of kindness], a miraculous world. And it is turned to the future, it understands there will be challenges. And we are figuring out how to protect our identity throughout those challenges. You have to understand, I’m not changing the community here. I’m protecting it.”

Avital Chizhik-Goldschmidt is the Life/Features editor at the Forward. Her work has appeared in the New York Times, Salon, and Tablet, and she teaches journalism at Yeshiva University’s Stern College for Women. Get in touch with her [email protected] and follow her on Twitter @avitalrachel.