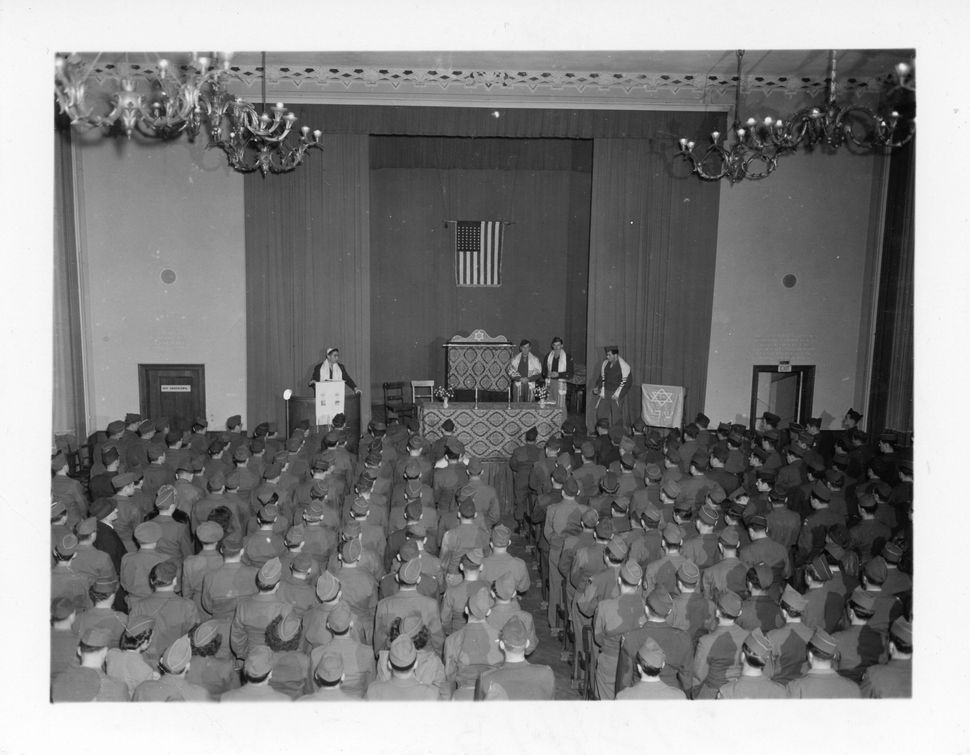 American soldiers, male and female, occupy every available seat in the auditorium dominated by an American flag.

The room barely stirs. A young chaplain draped in a tallit, the sort they all wore at their bar mitzvahs, stands behind a lectern placed off to the side. Approaching from the right, a young private nears the bimah set beneath his country’s flag.

The room is absolutely silent, a single breath held in anticipation. He’s so young, so insignificant, all eyes on the one they found to lead them in the holiest of prayers in this place where they just vanquished the enemy sworn to their extinction. These American Jewish soldiers from all parts of the United States, so far from home yet so ensnared in this European nightmare, were probably speechless as they waited for the opening haunting verses of Kol Nidrei on that autumn evening. Beautiful and ugly, sweet and bitter, awesome and horrible and fabulous, this prayer of commitment they were about to invoke to one another and to their God.

Where so many had been brutally massacred for what they were about to do, they stood that night, joined, defiant, humble and daring to be restored.

And their designated cantor, whose sweet and pure voice would be their advocate in this holiest of ceremonies — who was he?

Standing cocooned inside his tallit, its ritually knotted fringes gently brushing his U.S. Army uniform, his soldier’s cap at its jaunty angle replacing the yarmulke always perched on top of his head: Was he remembering Kristallnacht, when his father’s shop in Vienna was first looted then destroyed, when his father was arrested for the first time? Was he remembering the morning a few weeks later, when he stood on the train platform, the older guardian to his younger brothers? Saying goodbye to his parents, who kept telling him how lucky he was to be on that Kindertransport going to England?

My grandmother told us the story, her voice gathering strength and her back straightening, her silver hair adorned with jeweled combs, her eyes bright as she recalled the shaming she suffered from her neighbors, who accused her, at best, of being alarmist, at worst of what we would today call bad parenting. Not so, she knew. Not so. Was he appreciating the courage she had in letting him go?

Was his prayer more personal, hoping for a future with his father that wasn’t to be?

His photo in his U.S. naturalization documents shows his nearly shaved head beneath his yarmulke, his eyes wide in his open face, his sidelocks curled behind his ears. It was a familiar look — I saw, but of course never spoke to, boys like him in our Brooklyn neighborhood. His privileged American-born children grew up in idyllic Brooklyn, where all our friends’ parents had similar stories. The older generation we knew was bent, gnarled and numbered, their expiration dates sealed in blue ink along their inner forearms. We were proud that my father was different; he came when he was younger, he was a soldier, his accent was barely discernible. He and my mother, a German-born Jew, spoke in English not just to us, but also to each other.

We were modern American Orthodox Jews. My brothers didn’t sport peyes, sidelocks; they wore teeny, cute crocheted yarmulkes. No white stockings and navy blue skirts covered my knees, no long sleeves hid my elbows on hot Brooklyn summer days. We wore short skirts, T-shirts, our long, middle-parted hair reaching our shoulders, our go-go boots bright white over our textured tights. We went to Orthodox yeshiva day schools, and we were fluent in our Jewish heritage. When the black kids taunted us, and the Italian kids tortured us, we gave as good as we got. They told us in school that New York City was a melting pot. Perhaps more oil and water than a cohesive mix, but coexistence, at least not-so-polite mutual disrespect, prevailed. And yet, there was always the underlying fear bred into our DNA: Would they hide us when the Nazis came? It was the stuff of late-night reflection. Cowboys and Indians was not for us — our game was Nazis and Jews.

Was I even stupidly envious of my father’s adventures? From Vienna to England to New York City, sheltered and nurtured by the Lubavitch yeshiva, at 18 he was drafted into the U.S. Army. No doubt he saw God’s hand enabling his safe return to a devastated Europe where he would find what he could of his family. I didn’t see God’s hand; I saw adventure.

We drowned in his stories, how he walked miles to the nearest synagogue when he finally earned leave on Shabbat, how he put on his tefillin in the morning while the men lined up in the mess hall. How, as a chaplain aide in postwar Berlin, with his fluent German, he helped survivors when and how he could. How, finally, he found his mother and was able to arrange military transport for her to the States.

Just a few weeks ago, I was idly Googling some old family history when this picture from the Washington Holocaust Memorial Museum popped up in my search results.

I stared at it for a long time. The image was tiny, but his profile was unmistakable. Did they know it was a refugee who sang for them that night? Did they know that the purity of his voice, and the collection of his life experiences, was what was representing that assembly of soldiers on that holiest of holy days? Could they possibly have known what an excellent soldier of God and country stood before them?

An ordinary man in extraordinary circumstances.

Simi Monheit lives and writes in Monte Sereno, California. She is at work on her second novel. She has three siblings, one daughter, 10 nieces and nephews and 15 grand nieces and nephews, all descendants of PFC Alfred Monheit.