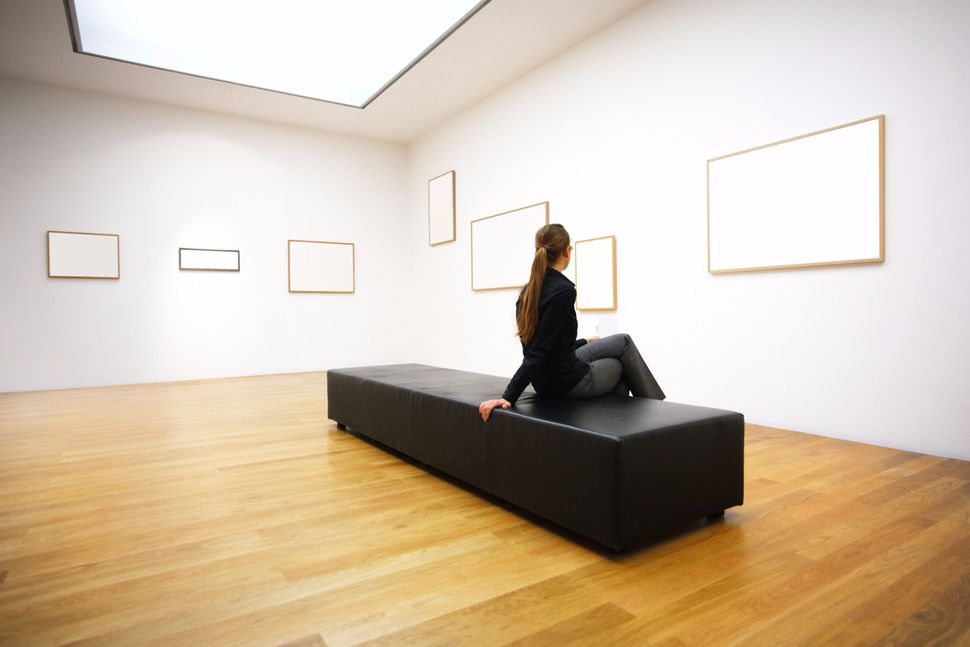 It is almost noon.

We are standing in the Whitney Museum in New York for Alexander Calder: Hypermobility. Included in the exhibition are some of Calder’s earliest works — motor-driven and wind-propelled abstractions, alongside some of his more famous kinetic sculptures.

In a departure from the usual ‘don’t you dare touch’ museum policy, Hypermobility gives visitors an opportunity to experience the works as they were designed and intended to be – in motion. During scheduled times throughout the day, the works are ‘activated’ by a museum specialist, realizing their kinetic potential.

The appointed hour arrives and our activator enters the space, clad in special garb: a white laboratory overall, white gloves, shoes covered in white cloth, and holding a long wooden instrument, its tip wrapped in a protective layer, used to propel the mobiles into motion.

But those gathered in the galleries waiting for some ‘big reveal’ are sorely disappointed. The event, when it comes, is activated by a light, gentle touch by the attendant, who moves around the gallery, slowly and methodically.

There is nothing hyper here. The mobiles do move and shift, but almost imperceptibly. 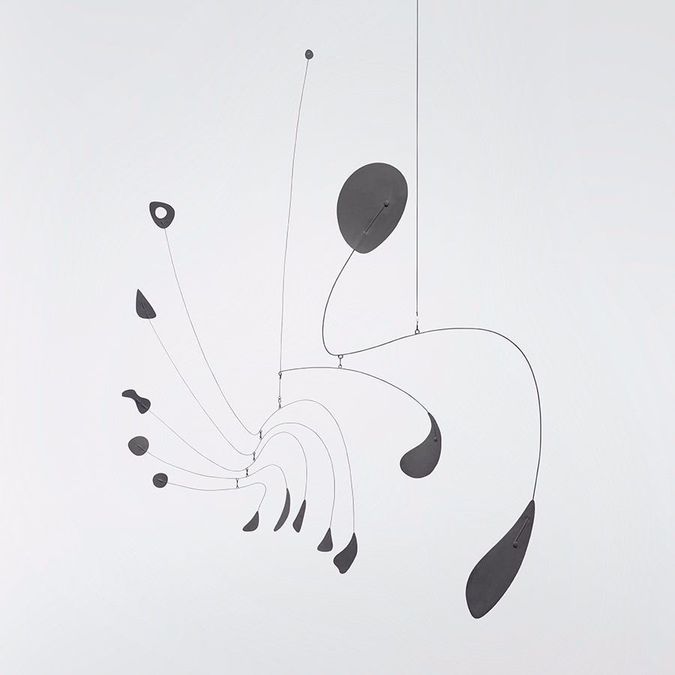 All this took time. It demanded patience, attentiveness and focus. Yet, despite all the craning and jostling of the other gallery visitors, it was a refreshing and nourishing aesthetic experience.

A cursory look on the internet will link definitions of the word ‘aesthetic’ with concerns around beauty or questions of ‘taste’.

But there is another approach, taken by philosopher of education, John Dewey (1934) who suggests the root use of the Greek word aisthetikos describes a heightened ‘sensitivity’ or ‘wide-awakeness’ to an experience, brought on by the ‘imagination’ as an active and conscious creative ability, a rapt curiosity and deep absorption in the activity at hand. By contrast, “anesthetic” experiences numb people, putting them to sleep emotionally and psychologically. 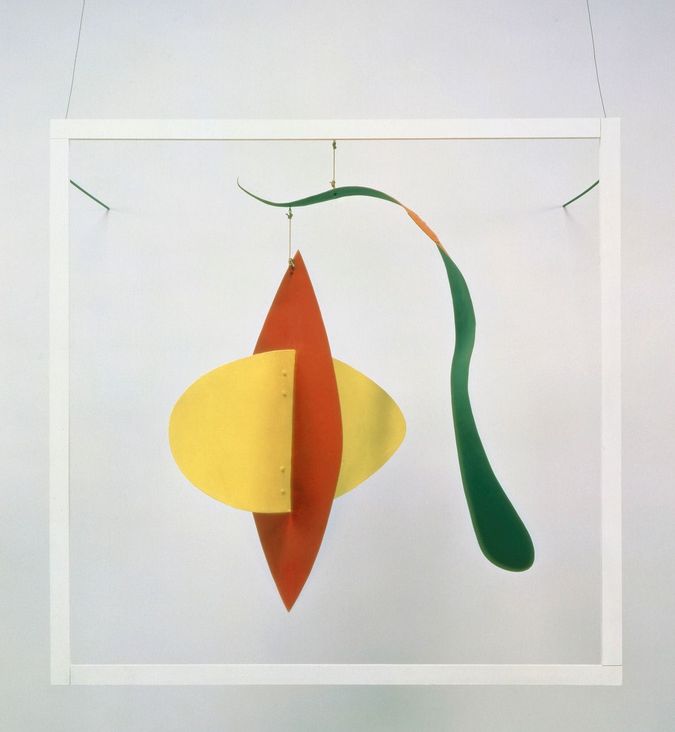 Alexander Calder, Snake and the Cross, 1936. Image by Whitney Museum

Interestingly, a recent visit to a Calder exhibit brought us to appreciate what it means to reach into the nourishing aesthetic qualities of the High Holidays, to encounter these days as a reservoir of the imagination from which to draw, when navigating times of volatility and uncertainty or renewed ways to attend to the everyday. To have an aesthetic rather than anesthetic experience.

On Rosh Hashanah and Yom Kippur, regardless of denomination or affiliation, the role of rabbis and educators are as activators, often garbed in white, assisting synagogue-goers and learners to uncover layers of meaning, purpose and self-actualization.

Without a doubt, this is an immense undertaking and responsibility.

Yet, for many, the High Holidays still remain holy relics, inaccessible and remote, demanding special language skills to crack open their meaning. These experiences still seem in a preserve of sorts, reliant upon “experts” to interpret and access their message for us.

But Jewish educators and activators are not relic specialists no matter how sacred the day.

Think of Yom Kippur as if going to the Metropolitan Museum of Art: Spending hour after hour – all day – passing from one painting to the next, accompanied by a well-intentioned albeit over-eager docent, until coming to the end, hungry, irritable, bored and overwhelmed.

It is unlikely such an experience will change a life. Actually, the bombardment of images, of words, frequently has the effect of freezing people’s imaginative thinking, getting in the way of their innate aesthetic sense.

So how might we, as educators activate the potential of those gathered to enter into the meaning of this period, genuinely and authentically?

Many feel a certain pressure to provide substantive content, well-crafted and thought-provoking sermons, to generally add value by sustaining the interest and engagement of the community in the service.

However, perhaps this is precisely not the time to be our own variation of the museum docent, to embark on a tour-de-force of the exegetical landscape or overload the service with the clamoring of voices from across the textual tradition. Our ‘activations’, when they come, might be light and gentle, as at the exhibition, rather than hyper-learned or overly directive.

After all, the “event” we are after, is not the music nor the readings nor the sermon itself.

Rather, we are after what occurs internally as a result of what is shared. Our task is to listen to ourselves. To grapple with the forms and images of our lives. To question, to protest, to retreat, to interrogate, to wonder. The experience of what Michael Fishbane terms a ‘rehabilitation of awareness’.

The meaning of these days is in the accessing of our histories, the sharing of ourselves, the feelings stirred and the aspirations ignited by the enactments on the bimah.

Such enactment is a central feature in the Avodah (the Temple service) of Yom Kippur. Based on Leviticus 16 and Mishna Yoma (1-7), it vividly describes the sacrificial rites in the Temple. The detailed and stylized service by the High Priest, clad in special white garb, reads like performance art.

In the temple courtyard, a crowd gathers, waiting expectantly for a divine verdict to be announced as the High Priest emerges from the Holy of Holies. The Avodah relates how upon hearing of a favorable outcome, in collective relief, the community kneels, bows, spreads out on the floor and fall on their faces in an offering of gratitude. It is a time when no words are spoken. Words are insufficient for the intensity of the experience.

This kinetic quality is reflected in many synagogues when during the recitation of the Avodah prayer, in the midst of a long, demanding and mostly sedentary service, members of the congregation in unison re-enact the posture of those gathered in the temple courtyard.

Rabbi J.B Soloveitchik in his classic, Lonely Man of Faith (1964), describes a human being invested in gaining a proximity and intimacy with the sensory world, who might seek God on Rosh Hashanah “in every beam of light, in every bud and blossom, in the morning breeze and the stillness of a starlit evening.” More recently, Rabbi Nathan Lopez-Cardozo has claimed that the core purpose of an authentic Jewish experience, like art, is to ‘disturb’ and that one cannot merely ‘inherit faith’ or ‘receive’ the Jewish tradition.

What these approaches share in common is the belief that the genuine religious experience such as described in the Avodah cannot be accessed as a passive, vicarious bystander, rather, it asks for an active ardent mode of discovery, to perform the narratives of our ancestors, but as a way of reaching into what this means for us, now.

Viewing this pivotal movement through the prism of our experience at Alexander Calder: Hypermobility, underscores how, sometimes, words alone are insufficient.

To be inspired, requires not just words, but a movement, which activates us to look at things ‘as if’ they could be otherwise, to release our imagination by uncovering different perspectives on our own situations, on the complexities of our lives. It is this reaching out for meanings which lies at the heart of what these days might be all about.

Samuel Klein is Chief Jewish Officer of the Jewish Community Center in San Francisco. Shira Hecht-Koller is Director of Communal Engagement at Drisha. Both are fellows on the Senior Educators Cohort at M²: The Institute for Experiential Jewish Education.

Alexander Calder: Hypermobility is showing at the Whitney until October 23, 2017.