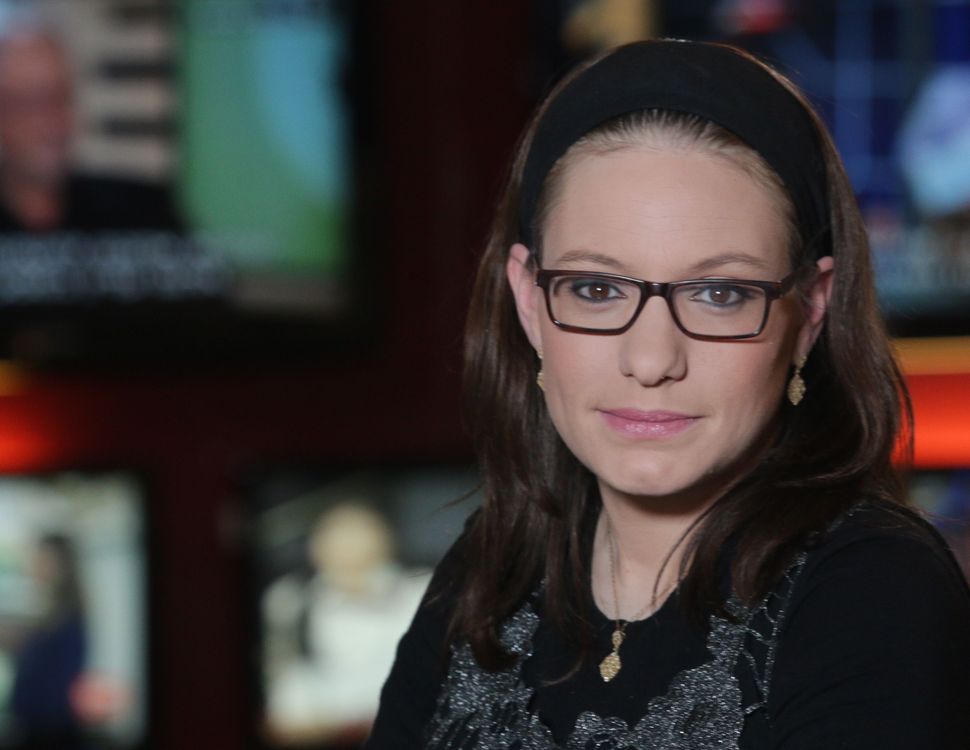 Born and raised in a secular Israeli home in Herzliya, Meir says she was always a journalist at heart.

“Writing was the only thing I knew how to do,” she said. “I was always good at it. In second grade, I started interviewing classmates and writing stories about them. I always believed that each and every one of us has a story. I’m doing this for 30 years.” (Meir is 36.)

At the age of 14, Meir interviewed then-prime minister Yitzhak Rabin for Dan Shilon’s show. She graduated high school at 16, and by the time she entered the army at 18, she’d completed a bachelor’s degree in political science from Tel Aviv University. In the army, she served as a reporter for the Israel Defense Forces’ Galei Tzahal station.

During her teen years, Meir began studying Judaism, growing increasingly observant. She met her husband ,Yedidya Meir, an Orthodox reporter on religious affairs for the IDF newspaper Bamachane, at a party hosted by a mutual friend.

An unusual shidduch, a matching between an Orthodox rabbi’s son and a media personality, the Meirs have become a religious media power couple in Israel.

Today, she is a prime-time anchor on Israel’s Channel 2, a columnist for the Yediot Aharonot newspaper and a radio show host for Galei Tzahal.

Known for his sharp wit and love of music, Yedidya Meir is also tall and light-haired, bearded and, in the white-and-black suit uniform of the Haredi community, hosts a morning show on Kol Chai radio from his home studio, while writing for the religious nationalist newspaper B’Sheva. “We are always together,” Sivan said. “Even on social media – we don’t separate there either. I think that’s really important for couples – whatever we want to post on social media, we clear it with one another first. Yedidya joins me for my biggest Channel 2 scoops and exclusives; he films the interviews often. He helps me redefine myself, asks me the tough questions: ‘Is this news story truly important? Why does it matter if it’s exclusive to you, if you get it first? So what?’”

Working as the only Orthodox journalist in a heavily secular industry hasn’t been simple.

“The conflict of religion and journalism is eternal, and daily,” she said. “For example, when Quentin Tarantino got engaged to Daniela Pick, the daughter of Israeli singer Tzvika Pick, my editor wanted me to interview Tzvika Pick about it. He said: ‘It’s a scoop! Interview him, say mazel tov!’ But to me, I don’t want to celebrate that, that’s assimilation. It’s bad. The response of course from my colleagues was, ‘Are you a racist?’” 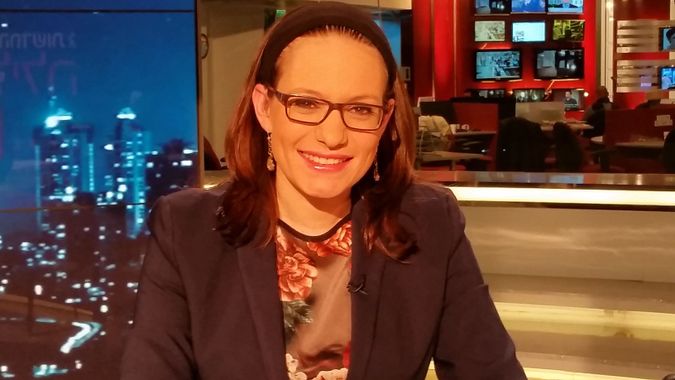 It’s moments like these that have pushed the journalist to pivot slightly in focus. Aside from her reporting, she has started to give lectures on the weekly Torah reading in Jerusalem and Tel Aviv (available on YouTube afterward).

The idea came to her while she was on maternity leave after the birth of her fifth child, two years ago, when she began to question her daily work: “What was I busy with? I felt I was done with talking about Judaism in a superficial way — the internal politics of Jewish groups, the Knesset, the Supreme Court. It was becoming boring.”

As journalism has changed drastically in the past few years, with media consumers relying less on broadcast journalists to report breaking news and more on social media, Meir began to re-assess her career. “In today’s media, you must redefine yourself as a journalist, make your own niche,” she said. “I began to wonder about what my unique role as a journalist could be. And I realized that as much as I was talking about Jewish issues, I was never speaking about Torah itself.”

So she began to give lectures, leaving her own political opinions at home. She found a hungry audience.

“I thought, perhaps I can use these tools of the media — knowing how to attract people’s attention, show them what’s important — and apply them to Torah study: ‘You must see what happened in this week’s Torah reading.’ I saw that whenever I touched Judaism in my work as a journalist the reaction was crazy — my social media posts had sometimes a reach of 1 million weekly. Once I spoke about identity, everyone was interested. There is a fundamental question at play here: Is Judaism a problem or a solution? For secular reporters, Judaism was always a problem. But I wanted to talk about it as a solution.”

Two years since she began giving classes, Meir has evolved into a female sort of Hasidic grand rabbi, with 1,000 people attending her weekly lectures, 130,000 following her posts on Facebook, and another 10,000 subscribers to her daily WhatsApp Torah thought. A savvy user of social media, she has built a following, of mostly Israelis between the ages 18 and 34, who appreciate her ability to hop between the rigid boundaries of Israel’s secular and religious worlds.

When I went to hear her speak at Jerusalem’s Hechal Shelomo one evening in August, packed with 500 people (a range of religious backgrounds, evident through the head covering variety in the auditorium) — she was in a role strikingly different from her usual place behind the Channel 2 news desk.

Standing at a lectern onstage, a slideshow projecting behind her, Meir spoke with the intensity and gestures of a rebbetzin, but at the pace of a broadcast journalist with the prospect of an upcoming commercial break.

It was the Hebrew month of Elul, the month of introspection, and Meir was musing aloud to her audience about the pervasiveness of technology, a common thread in her lectures: “In ‘Amusing Ourselves to Death,’ Neil Postman warns us of a time when people will get so addicted to technology that they won’t be able to think for themselves anymore…. Every possession we own has a place in our homes. Except for our phones. What is your phone’s place, if you think about it? With us, wherever we are.” She talked about the need to “exit from oneself,” from one’s routine, in the Elul season. How can we break out of our unhealthy routines?

After the lecture, teens and college-aged students lined up to meet with her — to comment on the lecture, ask a question, sometimes seek personal advice.

“I think my audience is more interested in what I have to say now, than they were before,” she said. “Before, they only saw conflicts in my reports, how Judaism can make us extreme, divide us. Now I talk about how Judaism brings us closer. It’s a different sort of work now, touching people meaningfully. For me, that’s more important than the next headline.”

Her popular book of Torah insights, “Hastatus Heyehudi” (literally, “The Jewish Status”), which draws on medieval commentaries, Hasidic sages and secular Israeli folklore alike, was just released in English, “PARASHA: Weekly Insights From a Leading Israeli Journalist,” by Koren’s Menorah Books. She writes about her existential career crisis as a reporter rather bluntly in her introduction: ”As a journalist, I have spent many years reporting on politics, the courts, the religious sector, and government ministries, and I feel that our attitude to Judaism has become very predictable as we move from one scandal, apology, protest, court intervention or legislation to the next. Structuring our lives around the parsha rather than the news cycle could go a long way toward improving our discourse.”

The rebbetzin brand seems to be doing pretty well for her.

Just last week, in a survey conducted by Globes’ women’s magazine, Meir was voted Israel’s most beloved female news personality, leading with 21% (though the study acknowledged that most of the respondents who voted for her identify as religious). A two-page spread shows Meir in a long black skirt, hands propped on each hip.

Image by Screenshot of Globes

When I asked her what it’s like to be the country’s most visible Orthodox woman, she dismissesed it.

“I’ve never been criticized for it [my visibility]. People in the two worlds always ask about the other: ‘Do they really give you a voice? How did the religious world react? Or how did the secular world react?’ But baalei teshuva, people who grow up secular and become religious, we know that the two worlds are closer than people think. We have a role, a mission — connecting audiences from two distant worlds.”

_ Avital Chizhik-Goldschmidt is the Forward’s lifestyles editor. Contact her at avital@forward.com_