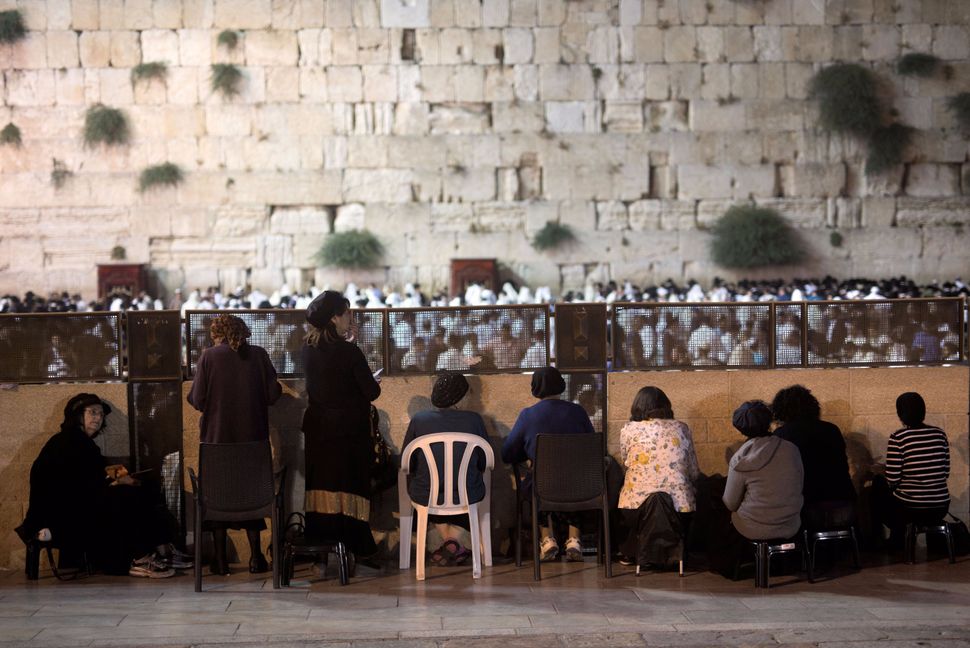 Women praying behind partition at the Western Wall. Image by Getty Images

There’s something compelling about the idea that as an Orthodox Jew, no matter where I am in the world, all I have to do to feel at home is find a synagogue.

But after nearly four decades of as a female Jew in synagogues in the United States and Israel, I am finally, belatedly, starting to absorb the message the Jewish community has been sending me and countless other girls and women all this time.

It’s the message I’ve gotten when I’ve stayed after Mincha for the seuda shlishit meal on Shabbat afternoon, only to discover that women quite literally have no seat at the table. The message when disappointed men reluctantly leave the only segment of a sanctuary intended as a female realm. When there is no such realm in the first place.

When I can’t raise my siddur over the mechitza to kiss the Torah on its way back to the ark because it never comes close to the partition. When I can’t hear the davening. When I can’t see the Torah raised so the entire community of worshippers — minus the ones in the women’s section — can proclaim, pinkie aloft, that this over here (or there perhaps, or no, I think it’s over there) is the Torah that Moses placed before the Children of Israel. The Sons of Israel.

When strollers are prohibited. When I sit behind a wall. When I can’t see the face of the rabbi purportedly speaking to all those present. When a 1-year-old makes happy 1-year-old noises and a man repeatedly makes unhappy shushing noises at least as loud. When well-behaved young Mordecais and Esthers — and by extension, their well-stocked caregivers — are unwelcome at what is traditionally one of the most child-friendly services of the year. When I’ve walked through Jerusalem’s slowly lightening streets after a night of Torah learning, joined by hundreds of others on the same pilgrimage to the ultimate synagogue, the Western Wall, to the stones I have been told all my life are sacred — only to be greeted by the unsacred sight of men in black shouting at other Jews, only to try to get a spot as close to the mechitza as I can be and fail utterly to hear the Torah chanted on the day we celebrate its giving.

The message it took me so long to receive is that for me, as for so many Jewish women, the synagogue — not all, thank God, but the synagogue as an institution — is a broken home, a home that can’t be relied upon to welcome me in, a home where even the most familiar contours will probably, at some point, make me feel uneasy, unsure, out of place.

One place for community leaders to begin is by seeking out not just those who say things are perfectly fine as they are, but also those who are harder to find: the ones you may not realize are feeling excluded because they show up anyway, and the ones you rarely see in synagogue because they’ve largely given up on it. Pay attention to what they tell you. Don’t assume there’s nothing you can do about it.

There are many seemingly small fixes that can help make it clear that women belong, with or without a male intermediary, as do parents of all stripes.

Jewish educator Deborah Klapper has written several articles about the importance of offering child care, of making sure the women’s section is as usable as the men’s section and of not shaming grieving women. For community leaders genuinely interested in helping women feel accepted rather than barely tolerated, these articles are a good place to start figuring out how to be more deliberate about conveying that women are welcome.

Often, it’s the little things that may not appear to be particularly important on their own but that accumulate power and meaning over time, conspiring to send a message of one kind or another, whether or not that message was intended.

For instance, many shuls offer a second shofar blowing on Rosh Hashana, and that should be lauded; the youngest of my four girls is 4 now, but I well remember how difficult it was to keep a crawling child in shul for long enough to hear all the shofar blasts.

But while offering this option is certainly helpful to parents of small children, synagogues and community leaders would do well to think more carefully about how people are supposed to know about such offerings. If the congregants of your shul don’t know whether or when there will be a second shofar blowing unless they’re in shul to hear the announcements, you’ve undermined your own good intentions, since many of the people who most need these services are precisely those who are least likely to be in shul in order find out whether or when they’re being provided. Ditto for what time children’s services begin or whether and when there’s going to be a repeat chanting of the one obligatory Torah reading a year, Parshat Zachor. Whatever you do, don’t assume women will hear about these initiatives from male relatives who do happen to be in synagogue. If you want women to know something, tell them, and do it before Shabbat or the holiday so they can plan around it. One of the good things about the 21st century is that you don’t even need a phone tree; an email, Facebook post or update of the synagogue website (if there is one) will likely do just fine.

Take marital status. Being married shouldn’t make me more visible to the Jewish community or better able to participate in it. Yet it does, in part by providing me with insider access.

Having a husband in synagogue has meant I had someone to intercede on my behalf so the congregation could pause long enough for me to recite the gomel blessing of gratitude aloud after giving birth. It has meant having someone who can put money into the tzedakah box conveniently located in the men’s section. In some synagogues, only those women with a man on the inside get to have the names of their relatives and friends recited out loud in the prayer for the sick.

The reason men often provide insider access for women is that in too many synagogues, Jewish women are outsiders in the sacred space of their own religion.

Perpetuating an approach that treats women as outsiders is not only fundamentally misguided, but also makes it particularly difficult for women who don’t have husbands in attendance to feel accepted. And it should make no difference whether they don’t have a husband or partner at all, or they have a husband but he wasn’t feeling good or doesn’t like attending services or simply went to a different synagogue.

Jewish women are Jews in their own right, and Jewish institutions need to treat them as such – not just sometimes, but all the time.

Over the past couple of decades, Orthodox women and men have increasingly been working within halakha to find ways for women to become more involved in prayer and Jewish leadership. The advent of partnership minyans and of female scholars and communal leaders is changing the face of Orthodoxy as women slowly move from the margins toward the center. But it would be a mistake for more conventional Orthodox shuls to deny that they too have a responsibility to treat their entire congregation as integral members of the Jewish community.

Being truly welcoming of women – in deed, not just in word – is not a minor task that can legitimately be relegated to the relatively few partnership minyans out there. It is a duty all shuls should be shouldering, from the most innovative to the most traditional.

I’d like to hope that as my daughters grow up, the message they receive will be that no matter where they are in the world, all they’ll have to do to feel at home is find a synagogue.

Shoshana Kordova is a writer and editor living in Israel and the co-founder of Have Faith, Will Parent, a virtual meeting place for parents of all faiths. She is a former editor and language columnist for the Israeli daily Haaretz and has written for publications including Smithsonian, Prevention, Quartz, New York Times parenting blog Motherlode and The Daily Beast. Her essay on gender bias will appear in the forthcoming anthology “What Future: The Year’s Best Ideas to Reclaim, Reanimate & Reinvent Our Future” (Unnamed Press, November 2017). She tweets @shoshanakordova.