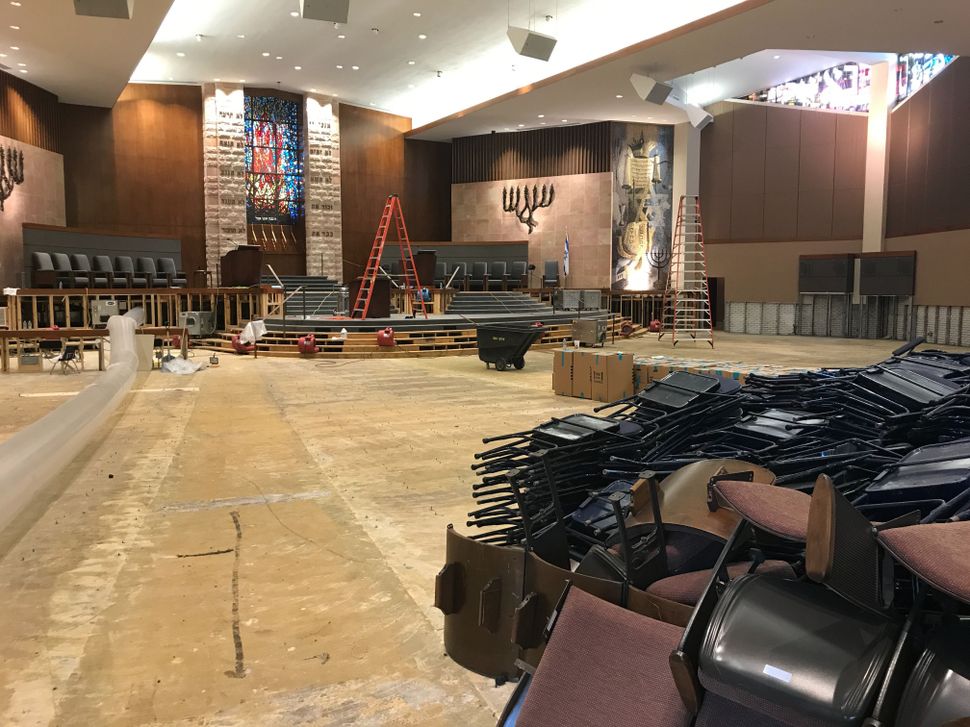 Some say the first American Jews were Texans, thought to have entered the New World in the 1500s alongside conquistadors headed for New Spain.

They were possibly killed by the Spanish or left to explore new lands, or absorbed into the ranks of crypto-Jewry, forgotten by historical record.

Their successors, now one of the oldest and biggest communities in the nation, developed a more permanent Southern Jewry along the Gulf Coast, surviving many a storm, from Carla to Ike to Allison and Harvey. Just days before Rosh Hashanah, the community, like so many others in the city, is still reeling while questions of what the new year will bring loom large.

Before the American Civil War, before Ellis Island overflowed with its huddled masses and, in some cases, before Galveston was founded, Jews returned to the shores of Texas. By the 1860s, those who settled in the once booming metropolis in Galveston would build a synagogue (Congregation B’nai Israel) and the first Jewish cemetery in the state.

Perhaps they, and their famed rabbi, Henry Cohen, found significance in the annual fading of hurricane season into the High Holidays. After all, the 1900 Galveston Hurricane, still the deadliest natural disaster in national history, decimated the island, a shell of itself today, just a week before the new year.

Their descendants now largely reside in Houston’s Meyerland area, home to a dozen Jewish institutions, the nation’s largest conservative synagogue, Beth Yeshurun, among them. The neighborhood is bisected by Brays Bayou, whose banks have breached doorsteps at least four times in recent years, none more devastating than Hurricane Harvey.

Some 1,000 Jewish homes have confirmed flooding so far, though the local Jewish federation expects that number to rise dramatically. “I don’t think it’s overstating it to say that, in some way, this has impacted almost every single person in the Jewish community,” Taryn Barinowsky, chief marketing officer of the Houston Jewish Federation, said in an interview.

The institutions fared much like the people. The Jewish retirement community and the city’s four largest synagogues all sustained damage.

“There isn’t a room, a sanctuary, a bathroom, a storage facility or an office that didn’t flood,” Beth Yeshurun’s Rabbi David Rosen said.

This week, instead of adorning seats in the Texas-sized sanctuary, what are left of the congregation’s prayer books lie in plastic bags amid rows and rows of boxes, piles of chairs and remnants of artifacts left behind.

Rosh Hashanah services will, instead, be held at Lakewood Church, the megachurch whose pastor, Joel Osteen, faced backlash for reportedly failing to open it as a shelter. It was the only place big enough to hold the congregation’s 2,000 families, 300 of whose homes were flooded.

David Siegman, 30, a managing partner at an upscale Italian restaurant, will be in attendance. A few weeks ago, Siegman, like many of his peers, tirelessly coordinated social media-sourced rescues from dry land. He worked to coordinate a boat mission, helped with the rescue of a friend’s aunt and uncle, of a nonagenarian with an oxygen tank stranded alone, and assisted in an effort to land a helicopter in a local grocery store parking lot, a mission the Federal Aviation Administration reportedly completed, taking 50 people to safety after the call.

Siegman’s own parents and their neighbors were rescued when his mother, Marlene Seigman, waded into chest-deep water with a pillowcase that read “help,” stood on her husband’s Ford Focus and flagged down another helicopter. During the tropical storm Allison, the Siegmans got 2 inches; during Harvey they got 2 feet.

While others around the nation chose synagogue clothes and prepared dinner, Siegman shuttled remnants of his parents’ home onto the curb. Nearby, the photo of a boy in a yarmulke dried on the lawn, and Siegman told an inquiring passerby to take the piano. Aside from the piles and piles of home remnants all around, Meyerland is nearly empty, a distant memory from when the streets buzzed with life. Dr. Michael Kaplan, 53, an ear, nose and throat surgeon, kept one arm on each of his parents for fear that the current would sweep them into the bayou as they waded past.

Brian Weiss, who was a New Orleans police commander during Hurricane Katrina, pulled his 11-year-old daughter from the flood when she became fully submerged. 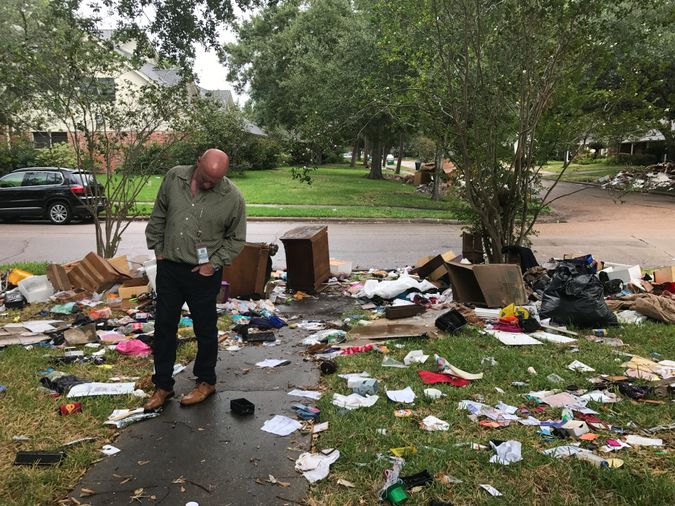 Even the rabbi’s 86-year-old mother was airlifted in a basket from her second-floor apartment.

“There are so many stories like that, of ordinary people who have been forced to confront extraordinary challenges,” Rabbi David Rosen, 66, of Congregation Beth Yeshurun, said in a phone interview. He does not think his mother will ever recover. It is strange to think that a community barely out of the current must now focus on celebration and ultimately repentance.

“While so many families are still reeling, is there any amount of spiritual renewal that can help right now?” Siegman asked. He said he does not question the significance of the Jewish High Holidays. “It’s just mysterious how this timing works so close to the Jewish new year.”

In the little sleep he manages between handling the recovery of his synagogue and its congregants, Rosen dreams of images of rising water. His own home, like three of his five rabbinical colleagues, flooded, too. Yet, he admits that preparing a sermon for the occasion is his great panic. As of last week, he had not yet put pen to paper, opting instead to console the scores of people who called.

There are no meeting records at B’nai Israel from the one or two years following, but if there were, perhaps the words of Cohen, who lost his own home in 1900, would ring true today. The synagogue and its congregants survived that storm comparatively unscathed, with just a handful of deaths compared with the thousands who died in the Galveston Hurricane over a century ago. The congregation would host services for other religious groups who were not as lucky.

Kaplan, who will attend this year’s services at Lakewood Church, can relate. He admits that many in his community are exhausted and uncomfortable about the idea of celebrating in someone else’s sanctuary. “On the other hand,” he said in a phone interview, “to go to services sends the message of strength and commitment.” Brian Weiss’s family, albeit grateful to their Houston community, has left for Charlotte, North Carolina, where they will attend High Holidays services at Congregation Beth El.

Baranowski believes the storm has brought a renewed desire for Jews to connect, with events and services leading up to this week bursting in attendance. The community’s future is otherwise uncertain, as they look ahead to the new year. For now, families continue to pick up the pieces, sending their children to new schools, and getting ready for the holidays somewhere besides home.

“I’ve had so many people tell me that that first moment when they saw the water they never felt so helpless in their lives, but thankfully, we all find,” Rosen said, pausing for a moment, “we all find the strength somehow to make our way out and to learn the steps that will bring us ultimately to a new beginning.”

Jennie Kamin is a political and environmental reporter living in New York City. She is a Houston native.