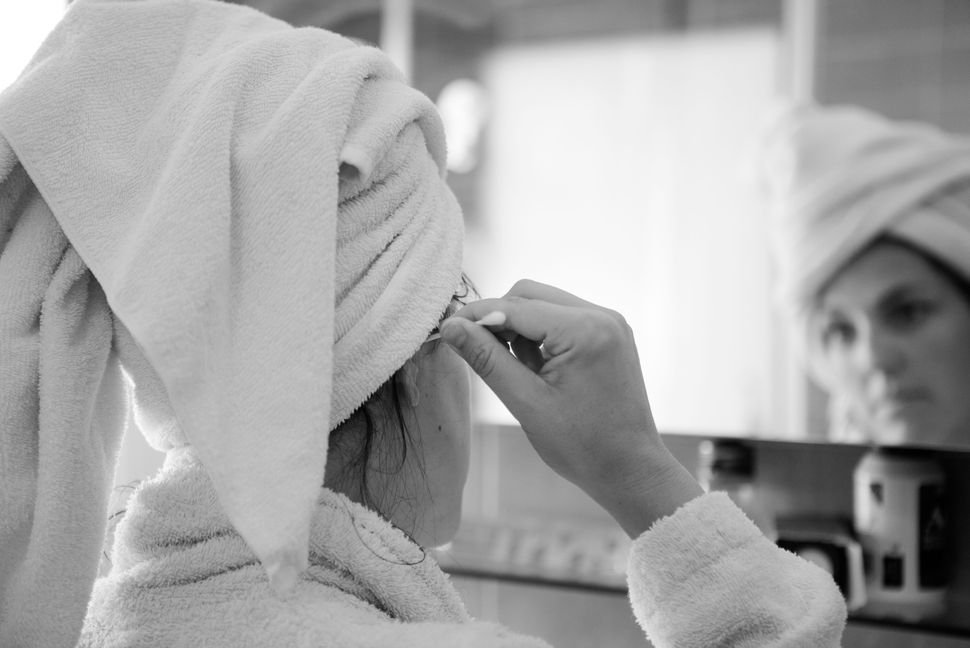 For many Orthodox Jewish women, the mikveh is fraught with tension: a secret space for married women only — who immerse only after the completion of a menstrual cycle and after childbirth -– occasions inevitably tied to sexuality. Immersions are obligatory, and are done in the privacy of night, only after the stars come out.

Yet for men, the mikveh is an entirely different space: a social gathering space, where men and boys will immerse during the day hours, on the eve of holidays, and occasionally, daily or on the eve of the Sabbath — occasions tied to the calendar year alone, and based on personal custom alone.

So for centuries, in most traditional communities, immersing in a mikveh, a ritual bath, on the eve of Yom Kippur, as a purification ritual before the day of atonement, was a man’s custom.

But some Orthodox women are taking on this ritual themselves, seeking an immersion that’s entirely different — and they’re bringing their daughters, the only time that unmarried women are permitted into Orthodox mikvehs.

“Women have as much stake in the spiritual preparation for Yom Kippur as men,” said Naomi Marmon Grumet, director of the Eden Center, a Jerusalem-based organization that seeks to “enhance” the mikveh experience. The Eden Center has been heavily promoting women’s immersion on the eve of Yom Kippur, as a way “to introduce the mikveh to your daughters in a spiritual yet non-sexually focused format.”

Some women are even taking advantage of the moment to create social gatherings out of the ritual, with group immersions; in Brooklyn’s Crown Heights, Rebbetzin Rochie Pinson offers a class on Yom Kippur, with a subsequent mikveh visit on Friday morning.

While the custom has become common mostly among men, in the earliest references to the practice in 10th-century texts, there seems to be no gender differentiation; Rabbi Saadia Gaon and Rabbi Amram Gaon both state that Jews should immerse on the eve of the holiday. In the 12th century, Rabbi Zedekiah ben Abraham Anav wrote, “All penitents are obligated to immerse, especially before Yom Kippur.” In the 15th century, Rabbi Yaakov Moellin ruled that the custom is “for men and women, young boys and unmarried girls, those who are bar mitzvah and bat mitzvah.”

Despite that, women (outside some Hasidic communities) rarely immersed — perhaps because over the centuries, rabbis felt women should be focused on holiday preparations (as Rabbi Ovadia Yosef ruled), or because logistically, most communities had only one mikveh and opted to give the limited day hours of the holiday eve to men alone.

“Up until now it was clearly understood that only my husband goes to the mikveh on Erev Yom Kippur,” Yotvat Fireaizen Weil wrote about her first experience. “But this time I went, and not alone — in a moment of spontaneity I took my 8-year-old daughter with me.”

Chany Profesorske, who goes to Mikvah Yisroel of Flatbush, says in her community the practice is growing in popularity. “Going to the mikveh has always been a surreal experience,” she said. “Women you would normally not see at the mikveh gather together to cleanse themselves before the Day of Judgment. It’s inspiring to see the elderly ladies there, some with their aides. It’s a really long line, but it moves fast, since there’s no preparation needed.”

Grumet says that she brings her daughters with her to the mikvah on the eve of the holiday: “We find it a very meaningful way to get everyone into the Yom Kippur mood, and the understanding that there is a process of change and cleansing that goes on. On Yom Kippur, we want to meet God, and engage His Mercy. Going to the mikveh helps me to move past the physical cleanliness and think about true internal purity.”

Many mothers are using the experience as a way to teach their daughters about the mikveh early on — without the sexual connotations. Emuna Witt Halevi, a Jerusalem-based Torah teacher and doula who also brings along her daughters, hopes to make it a “positive experience”: “When they were learning to get married, mikveh was a part of their life already.”

“This takes away the constant connection of mikveh and sexuality, so that girls can form their own relationship with the spiritual aspects of the mikveh and immersing of the whole body in water,” Grumet said.