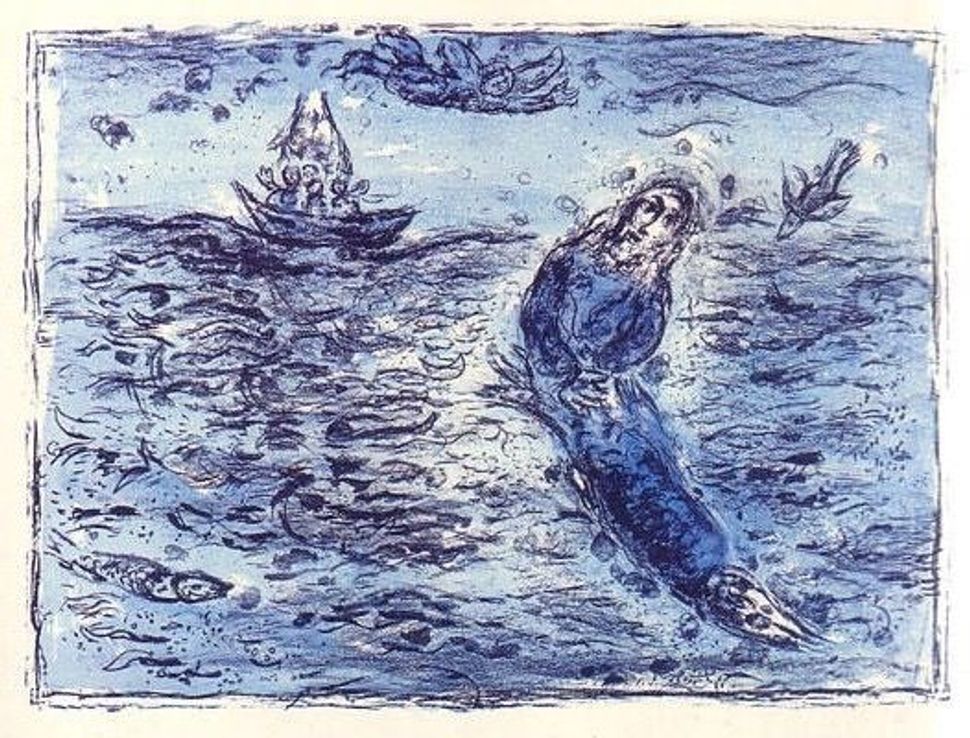 Late this Saturday afternoon on Yom Kippur, many Jews will be sitting in synagogue listening to the chanting of the Book of Jonah.

We will be tired, hungry, thirsty, and perhaps even irritable.

At this point, many will be tempted to take a snooze – or dream of the break-fast that awaits — during this unlikely, even, for many, absurd story. And that’s a shame, for it is precisely the book’s unbelievable message that makes it starkly relevant today – despite the protests from modern naysayers, including Bible critics.

The key is to read the Book of Jonah from the perspective of quantum theory. Devised 2800 years before the thought experiment in quantum physics called “Schrödinger’s Cat,” the Book of Jonah actually teaches us the same principle as the former, only from a moral rather than a physical perspective.

Let me explain, starting with the story of Jonah.

One has to hand it to God and the rabbis: It takes a pretty remarkable tale to get one’s attention after twenty-something hours of fasting and praying, and the Book of Jonah passes the test.

The book is unusual on many levels: Jonah is a prophet in the Northern Kingdom of Israel, a bitter enemy of the Assyrian empire. Yet to Jonah’s dismay, God orders him to urge the citizens of the Assyrian capital, Nineveh, to repent and escape destruction. Then, despite being a God-fearing prophet, and being in a position to save thousands of lives, Jonah disobeys God and flees from his mission. He first runs away to Jaffa and onto a ship. Then, as a devastating storm wracks the ship, he disappears into the hold. He then even tries to escape consciousness by falling asleep. He thus not only leaves the people of Nineveh to die, but abandons the valiant sailors, the innocent passengers, and finally himself as well.

But the story does not end there. The sailors cast lots to divine who is responsible for the storm and find out it is Jonah. When they confront him, Jonah responds that God has created the storm because of his deeds. But instead of changing his own course, Jonah suggests they throw him overboard. When Jonah hits the water, he is swallowed by a large fish.

It is with this twist of events that we truly get the book’s moral take on quantum mechanics.

Quantum physicists devised the thought experiment of “Schrödinger’s Cat.” It describes a situation in which a cat is trapped with radioactive material in a closed box. In theory, the cat is at points simultaneously dead and alive, since according to quantum theory the radioactive material can exist in multiple states and these states don’t resolve without outside observation. Physicists call this state of multiple states a superposition. Only when the cat is observed does the superposition collapse.

In the belly of the fish, Jonah is like Schrödinger’s cat. No one can observe Jonah where he is and no one knows what will happen to him, just as no one can know the fate of the cat. The passage of time can be three seconds, three days, three years, or a lifetime. It is by definition, not observed or not observable, except of course by God.

To the outside world, Jonah is indeed both dead and alive. Happily, Jonah’s superposition collapsed into one new trajectory, which alters his life’s journey.

But here lies the difference with the physical scenario of Schrodinger’s Cat and the moral tale of the Book of Jonah:

While the cat’s state depends on the physical changes in radioactive material, ours depends on our choices. When Jonah rouses himself and prays in a way that aligns himself with God’s will, he tips the scale. Jonah might never have made this choice, and we would never have observed Jonah or read a book about him.

The Book of Jonah teaches us that on Yom Kippur, we Jews all find ourselves in a moral superposition.

We may well repent for our past sins, but all future potentialities still coexist, we are simultaneously, potentially, both righteous and wicked.

As Yom Kippur draws to a close, the compelling question is what we will do next: Will we make this a better planet by seeking to promote justice among all people, including our enemies? We can declare ourselves ready to take up the challenge, or we can flee just as Jonah attempted. Of course we sympathize with Jonah. It must have been excruciating for Jonah to utter his prayer and accept God’s plan. Enemies are people we naturally want to see destroyed or at least taken down a peg. And if we feel we live in a polarized society today, Israelites in 800 BC faced a brutal empire, an empire that would eventually exile the ten Israelite tribes of the Northern Kingdom. But God’s message to Jonah was that even enemies are humans, who should have a chance to mend their ways. They too exist and can enter a superposition and choose a different trajectory, and even cease to be our enemies.

While Schrödinger’s cat is subject only to the vagaries of radioactive decay, we are privileged to resolve our own trajectories by making moral choices just like Jonah.

As this very short book concludes, Jonah once again retreats to indifference. The sun beats down on Jonah, he becomes faint and only cares about whether he can get some shade. He is more concerned about his own comfort than whether the people of Nineveh have repented. Will they be saved or buried alive? Here too we can sympathize; we synagogue-goers are also a bit faint.

Yet it is at that very juncture where we are encouraged by the reading of the Book of Jonah to make the right decisions.

This Yom Kippur, let us emerge from the belly of whatever fish we are hiding in, to do the right thing.

Scott A. Shay is the author of Getting Our Groove Back: How to Energize American Jewry (2nd Edition, Devora, 2008) and Chairman of Signature Bank of New York.