Return of the Shtiebel: Why Old-School Synagogues Are Making A Comeback 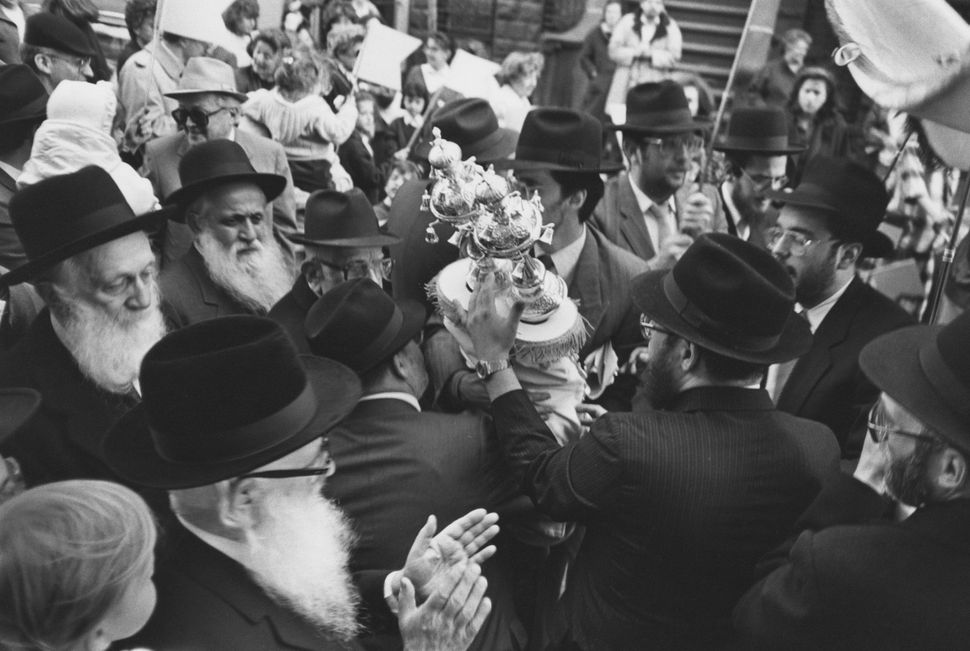 The dedication of a new Torah scroll in a synagogue on the Upper West Side, New York City, 24th April 1988. The Torah is adorned with finial bells. Image by Barbara Alper/Getty Images

These names might sound like remote provinces in Ukraine, but they are also the names of Orthodox micro-congregations bustling here on Manhattan’s Upper West Side. They’re referred to as shtieblach (Yiddish for “little houses”), and although many have died out with their congregants, some are making a comeback on the Upper West Side, drawing hundreds of young Jews looking for a place to pray and socialize.

And for good reason.

A hundred years ago, shtieblach in New York City served as houses of worship and mingling for Jews of a common feather. To the outside world, the Jewish immigrants were simply eastern Europeans; internally, however, each shtiebel identified with a particular province or region. In what is today the happening nightlife district in the Lower East Side, was once the Jewish capital of America and home to no less than three hundred storefront shtieblach.

Similarly, the Upper West Side was home to a shtiebel every few blocks in post-war New York. For the most part, they were created by European transplants of Orthodox communities, and were later joined by survivors.

Writing at the height of the storefront synagogues, anthologist Judah David Eisenstein, says that Jewish immigrants were opposed to two things: decorum and cantors. The shtiebel was thus the antidote to the formal synagogue. It offered a warmth and informality, often marked by no rabbi at all. The services were more of a cacophony of worshippers singing at their own pace, led by a simple Jew.

As the immigrants and their children grew more American, however, the game changed.

“The Jewish ethnic distinctions [from Europe] fell away,” says Dr. Jeffrey Gurock, Professor of Jewish History at Yeshiva University. “They were now American Jews, whether Orthodox or Conservative.”

Larger synagogues offered resources that the smaller spaces couldn’t. As the necessity of the shtiebel diminished, so did the congregant base.

But in recent years, some have gained steam in the Upper West Side. The synagogue experience, says Gurock, is now “going back from a performance to participation on part of congregants.”

Demographically, the West Side is a hub for young Jewish professionals whose synagogue priorities are largely socializing and camaraderie—at the expense of commitment. The shtiebel fits that niche. Less structured than the large congregations, shtieblach offer a built-in community where everybody knows your name, but long-term expectations are low. The lack of structure also leaves space for millennials, many of whom feel overwhelmed in a larger space and bound to historical structures.

Ten years ago, the Ridniker Shtiebel on 89th and West End Ave had trouble finding ten men for a minyan. Today, on a Saturday morning, you’d be hard pressed to find a seat. The synagogue, founded in 1943 by the Ridniker Rav of the Sanz Hasidic Dynasty, had been running low on membership since the 60’s when most of its initial congregants died.

To attract millennials, the leadership realized it needed a draw: A blowout kiddush reception, with the best cholent and liquor in town. The synagogue was so successful that certain whiskey-inclined members were coined JFK — “just for kiddush”.

While the shtiebels pull congregants from the righter-wing spectrum of Orthodox community — the Kozniter synagogue is led by an ultra-Orthodox, Hasidic Rebbe — they manage to attract a cast of unlikely characters, too.

Hank Sheinkopf, political consultant and former advisor to Bill Clinton attends one. He finds the camaraderie unparalleled. “There is no average shtiebel person,” says Sheinkopf. “A Jew fits in to an observant environment, where he/she feels comfortable in praying. For the younger generation they work because they’re much less regulated, require less commitment, and they are good gathering places.”

The shtiebel is indeed small enough for all members to know one another. In a recent (men-only) WhatsApp group, one shtiebel congregant posted a call to action: “I would like to remind the following: As the holidays approach, there are people in the community who don’t necessarily have family or places for meals…they need places to go. Please be mindful to invite people.”

On a typical 12:30pm stroll along West End—or “Shabbos”—Avenue, clusters of men in black hats stroll alongside women in wigs, coming out of any one of the shtieblach.

Don’t expect to see as many strollers, though. Based on a stringent interpretation of Jewish law that prohibits carrying in public spaces, many Orthodox mothers without nannies are confined to the home. “In many ways it’s a boys’ club,” says Sheinkopf. “Women are certainly welcomed, but more men tend to go to shul on Shabbos in traditional Judaism.”

Not everyone is as enthusiastic about the shtiebel culture. One congregant of a large Upper West Side congregation criticized the exclusivity of the shtieblach as a cohort of people seeking to belong to their own socio-economic strata.

According to David Ascher, president of Congregation Ohav Zedek, larger congregations can offer homes for the lonely or disenfranchised, something he says is missing in the tightly-knit shtieblach.

But synagogue tribalism is nothing new, according to Gurock.

“Shtieblach in Europe were often defined by profession, such as the shoemaker or tailor shtiebel,” he says.

Of course, these days those distinctions will be less between cobblers and tailors, and more between hedge fund managers and real estate investors.

It’s the Upper West Side, after all.

Return of the Shtiebel: Why Old-School Synagogues Are Making A Comeback