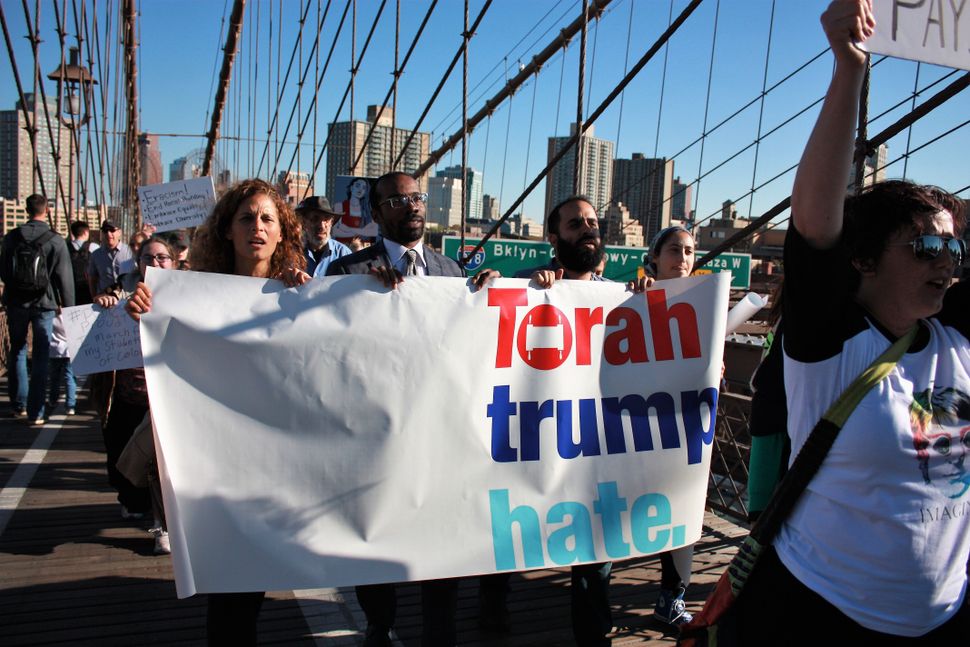 When the March for Racial Justice announced its sister marches on the day following Yom Kippur, several Orthodox Jewish social justice activists decided it was time to speak up, too.

Approximately 400 people showed up for the march on Sunday, with a large percentage visibly from Jewish groups including T’ruah, Hitoreri, Zioness Movement, and American Union of Jewish Students. Orthodox group ‘Torah Trumps Hate’ estimates that almost 100 members of their group were in attendance throughout the day. “We are obligated to fight racism, oppression, and injustice, because that is the right thing to do, whether we are welcome by the left or not,” said Victoria Cook, founder of the Facebook group “Torah Trumps Hate”. “That is what the Torah demands. We have no choice. Everything else is cognitive dissonance. Hopefully, by doing this visibly, as Jews who focus on observance and tradition, it will help build the bridges necessary to form long-term deep alliances and coalitions within the left.”

Cook created the Facebook group in the wake of the November election, to create a space for religious Jews to talk about issues. The group quickly grew into a movement of its own, or according to its description, a “a coalition of Torah focused Jews who see the current administration as an anathema to Torah values and corrosive to not only the United States but to the Jewish community.”

“Part of why I started the group was because I was feeling caught between the pincer grip of anti-Semitism on both sides of the political spectrum,” Cook said. “I was motivated to try to build ways of having a dialogue with like-minded people within my own community about how to engage in liberal causes as proud observant Jews and Zionists. I was so tired and hurt by constantly being kicked out of the intersectional tent.”

“It’s not Orthodox Jews against Trump, which, while valuable, doesn’t represent a larger and deeper vision,” says Elad Nehorai, who joined Cook as a leader of the group. “Torah Trumps Hate implies that this is about something higher than politics, and than Donald Trump. We want to create a world of kindness, starting with our country. And that means seeing beyond the political moment towards a messianic vision, even as we deal with the messiness of the now.”

The march organizers acknowledged the large presence of Jews, as they convened at Brooklyn Plaza, before marching across the Brooklyn Bridge to City Hall Park.

“Racial justice is a Jewish issue,” said Dorcas Davis, founder of the March for Racial Justice. “When they ask you to choose between being Jewish and standing up for racial justice…say, ‘No! We never have to choose one or the other.’”

“I’ve spent a great deal of my life committed to social justice,” said Ruth Messinger, founder of the American Jewish World Service, who was in attendance. “I think the issues that need to be addressed in this country right now, against racism, against Islamophobia, and yes, against anti-Semitism need to bring all of us together who know there’s a serious danger afoot in this country that white supremacy is a real threat to people of a variety of faiths, religions, colors, sexual orientations.”

Many found the juxtaposition of the march to the High Holidays meaningful. April Baskin, from Jews for Racial and Economic Justice, said to the crowd: “On Rosh Hashanah and Yom Kippur we blow the shofar and say ‘tekiah’ – it’s a wake-up call. Let this march be a tekiah moment for all of us….It is time to dismantle white supremacy once and for all…It is time to collectively proclaim, ‘Tekiah! Wake up!’”

Brett Parker was glad he showed up to the march. “On a personal level, my family, as you see, we’re mixed: we’re Jewish, we’re Jamaican, we’re black, we’re Ashkenazi, we’re multilingual, we’re multicultural,” he said. “Every part of our identity feels under threat in the current climate… so we’re out here in solidarity with all of those people to say that we will not be frightened into silence.”

From young to old, the crowd felt energized and seemed to feed off of a shared desire to enact change and show up for people in need.

Inspired by other social justice movements, Cook and Nehorai said this is just the beginning of their public activism.

“While we need the outside world to see that observant Jews have not lost their moral compass, we also want the bullying voices within the Jewish community to no longer be so sure that they have a majority of support,” said Cook. “And most importantly, it is essential for the people in the community who feel scared and alone to know that they are not the only ones. We want to give them chizuk, empowerment, and hopefully the courage to come out.”

Talia Liben Yarmush lives in New Jersey with her husband and their two sons. You can see more of her writing at www.TaliaYarmush.com.