Am I Wrong To Drive On Shabbos To Visit My Orthodox Family? 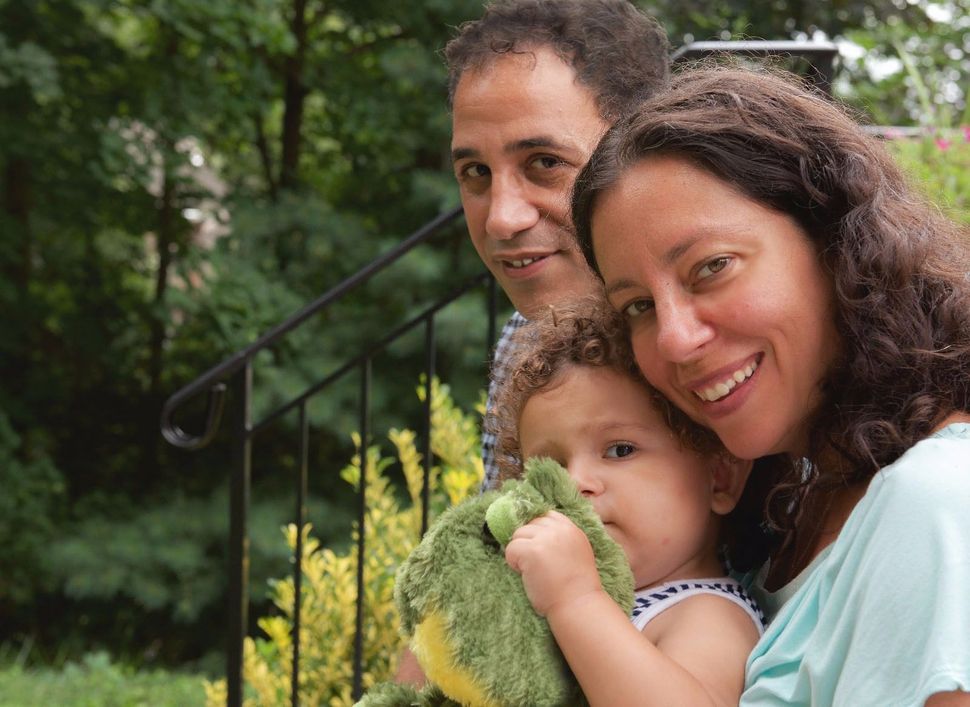 The author with her family Image by Amy Klein

“Do not drive here on Shabbos,” my father said, using his Brooklyn, Ashkenazi-style of pronouncing the Sabbath, which I now call Shabbat lest my secular Israeli husband make fun of me for my old ghetto ways.

I was planning on driving from Manhattan to his house to see my relatives, who were in for Sukkot. I was excited to sit in their Sukkah in this unseasonably warm Indian summer, and Saturday seemed like a good day so Solomon and I wouldn’t have to miss work.

“But I thought we came to an agreement –” I started, but he interrupted me before I could mention these last few years, when his wife would graciously let me know when exactly they would be home on Shabbat or holidays so I could “pop in” without an explicit invitation. It seemed like just another Orthodox loophole I was familiar with from my three decades of being religious.

“We didn’t come to an agreement,” my father interjected. “I don’t want you driving here on Shabbos,” he said. “It’s disrespectful.”

I wanted to scream in frustration, like I was fifteen again and running out of the kitchen tearing my hair out at the unfairness of his authority. I wanted to tell him how respect worked both ways, not only toward the observant but the people who made other life choices. “I don’t force him to eat treif in my house, so why should he force me to wear a yarmulke in his?” Solomon always said. But I was a wife, mother and independent woman, and since it was right after the High Holidays, the last thing I wanted was to start another feud that could last months, knowing us, my father and I, two stiff-necked Jews.

“Fine, I won’t come at all,” I said, wishing I could slam down the phone satisfyingly, but since it was my $500 cell, I simply clicked off. Which wasn’t the same thing at all.

I furiously turned to Rabbi Google. Surely many learned people would rule that it’s permissible to invite guests for the Sabbath or Holidays even if they would drive over – which of course is a sin — but that hachnassat orchim, or hospitality, was a more important Jewish value.

What I found shocked me.

“Is teaching them about prayer more important than teaching them about Shabbat?” Rabbi Moshe Feinstein wrote. “This isn’t mitzvah-education, it’s the opposite, G-d forbid,” he said, forbidding inviting people to synagogue if it meant they would drive because you would be inciting them, encouraging them to transgress. (And using my $100,000 yeshiva day school education that was barely put to use in my daily life, I extrapolated that if you aren’t allowed to invite these sinning drivers to something as boring (IMHO) as synagogue, you definitely wouldn’t be able to invite us to a meal.)

The main problem with inviting people to your house if they’d drive, I found — after falling down the endless rabbit hole of rabbinical rulings on the Internet — was that it was like “putting an obstacle before a blind person.”

A blind person. We non-observant Jews were like blind people, stumbling in the dark and they were causing us – no, forcing – us to stumble. What bothered me in all these intricate halachic discussions was how They, the Orthodox Jews, viewed us, the Non-Orthodox, with barely a will of our own, a life of our own: We were just these beings – zombies or robots – who were only animated when we entered their world. If they beckoned us over – to the synagogue, to their house, to their Sukkah, to their Passover seder – then they’d compel us to sin. (Like we weren’t going to be driving anyway without their invite.)

Of course I was familiar with this line of thinking, which is why for the decades since I left Orthodoxy, I edited myself, not mentioning to my family what I did “on Saturday” or that steakhouse I ate in or when I flew on Sabbath (and God forbid if I died on Shabbos doing something heretical like skiing, they’d probably say, “Well, what did you expect?”). If I were to jog by my best friend on Shabbat, she wouldn’t see me. I’d be veritably invisible. I know this, because I’d been the same way myself, a little girl obliviously walking to shul on Shabbos, holding my father’s hand, warm and cozy in her perfect religious world.

If I wanted them in my life, it had to be on their terms.

“Respectful,” in my father’s parlance. “Obsequious,” in my husband’s terms.

“Why do you care so much, anyway?” Solomon said when he saw me fuming.

“I hate being told what to do,” I replied.

“Why can’t you go on Sunday?” he said. It was true – I could still see my family on Sunday. But I was still upset.

It’s hard to have a close relationship with religious people if you can’t see them on Shabbat or holidays. That’s their downtime. Their hang time. Their fun time.

But it was more than that. I didn’t want to be barred from my dad’s house because I wanted to partake in the holiday meal, the glowing atmosphere of kids running around without staring at screens or TV blaring or everyone gabbing on the phone. I wanted to be there for a lazy Shabbat afternoon. I sometimes missed my Sabbaths. Not enough to go back to it full-time – an impossibility given my beliefs and my marriage – but enough to be able to experience it once in a while.

I wanted to have my chulent and eat it too.

Truthfully, driving on Shabbat “saved” me.

I was 30 years old, single, new to Los Angeles. I took one look at the stroller-filled synagogues in Pico Robertson and fled to Venice Beach – the farthest place in the world I could imagine from the Brooklyn ghetto. I surfed in the morning, practiced yoga in the evening after work, went to bars and parties, and did other things I imagined people not consumed by a religious life did, trying to make up for lost time.

“Do you want to come over for Shabbos?” my friends in Pico and Hancock Park would ask me (I still had a bevy of religious friends from my past).

“The whole thing?” I would say, shuddering. I didn’t want to be stuck at the Saturday afternoon table when the sun was shining so brightly outside. I did not want to be listening to pithy words of Torah I’d heard a million times before. Besides, I was training for a marathon.

“You’re welcome to stay over if you want,” they would say. I didn’t know this at the time, but apparently it’s another ruling, a permissible way of inviting someone secular over on Shabbat: Offer them an opportunity to stay over, so you’re not “making” them drive. I’m not sure my friends were following this ruling because soon they dropped the pretense that I’d sleep over and even allowed me to come during the day – a car ride away.

Enough of these people called me – friends, relatives, even one rabbi – that I had open invites whenever I felt like it. It definitely wasn’t weekly, but as I got in touch with a different relationship to my religion – less fraught and antagonistic, realizing it would still be a part of me no matter how far across the earth I ran – I didn’t skip a holiday. I also went to my Reform and Conservative friends’ families’ homes on holidays too, and realized there were many ways to be a Jew.

(Because it was L.A. – a different religion than Brooklyn, even in Orthodoxy — I still recall some grand sukkahs, decorated with gold mesh and Tiki lights, where meals of duck pate chulent were served before it was all the rage. But mostly I remember parking my car a block away, tucking my car keys in my sunglasses case, and seamlessly fitting into the festive atmosphere – kids chattering, strangers meeting, new ideas being exchanged — just for one meal.)

What would have happened to me in those early years in L.A. had the religious community cut me off? Perhaps I would have decided I missed religion so much that I would have returned full force. More likely, I would have left completely and absolutely, because out of sight, out of mind.

Now, in doing my research to show my father, I see that a good number of important rabbis say that you are allowed to invite people like me over in order to bring them closer to religion. (Without condoning the driving.) I’d like to think that wasn’t their sole motive, though. That my friends just wanted to be with me – and Shabbat and holidays were the only time they had.

Turns out I did not have to go back to my dad with my newfound learning.

“Why don’t you come on Friday, instead?” he said, calling me back. I was so impressed with his flexibility, his willingness to meet me halfway. Truthfully, there was a small part of me that admired his devotion, too: his crack of dawn Talmud lessons, his three-times a day prayers, his adherence to the strictest Jewish law. Just for once, I was glad he made an exception for me.

Or had he? Suddenly I realized the trick: Friday, the second day of the three-day holiday, was technically not a holiday for me, with my Israeli passport and husband, as Israelis observe a shorter holiday than their Diaspora coreligionists. If I drove to Brooklyn then, there would be no sin for me or for him.

It was another loophole, but I’ll take my victories where I can get them. We’ll have to tackle driving on Shabbos for another day.

Amy Klein writes about health, fertility and parenting and is working on a memoir. Follow her on Twitter, @AmydKlein

Am I Wrong To Drive On Shabbos To Visit My Orthodox Family?