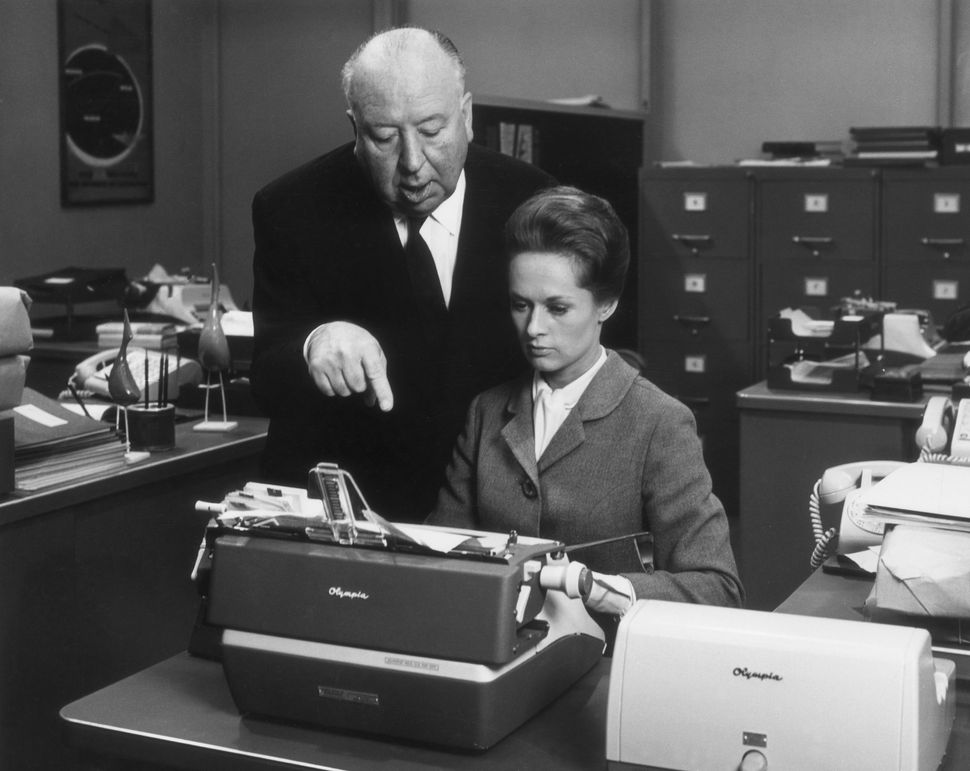 British director Alfred Hitchcock directs American actor Tippi Hedren while she sits in front of a typewriter on the set of his film, ‘Marnie’. Image by Hulton Archive/Getty Images

I didn’t hear the screened door in the back of our house open as my cousin’s 30-year-old husband, Harold walked in. He asked me to baby-sit that night for their children. My cousin was the one who usually called. His coming over was odd. Dressed in a yellow cotton shirt and khaki pants, he stood, smiled and waited for my answer. I was wearing my cut-off jeans and an over-sized, wrinkled white blouse.

Harold was handsome, over six feet tall, broad-shouldered, a gloater and prone to being full of himself. I had seen him give ape-like, grunting hugs to — and squeeze and pinch the posteriors of — his short wife, mother-in-law and sister-in-law, as if they were toys. I thought he was a jerk.

As an 18 year-old, curly-haired, 5’5’’ freshman at Simmons College, an all women’s school in Boston, I had just completed my first year and was living at home for the summer in a small town in Upstate New York.

We had a tiny Jewish community. Most knew and had grown up with one another.  Harold and his family were the first newcomers in generations. My mother, who chaired our synagogue’s Welcome Committee, met his family. Mom, the consummate networker, introduced him to my cousin, who was 23. Three months after their introduction, they married and had two children.

One afternoon, I was alone ironing sheets and pillowcases in our kitchen. The portable radio sat atop the washing machine and was blaring Bob Dylan’s “Blowin’ in the Wind.”

Suddenly, he dragged me away from the ironing board, pushed me into my sister’s bedroom. I grimaced as he pinned me down on the bed. He held my wrists tight and put my arms over my head.

Herb was my boyfriend, my first, who stayed in Boston that summer. Cute in a nerdy way with tortoise-shelled framed glasses, he was a sophomore at MIT and belonged to one of the university’s many fraternities. We had gotten pinned and I wore his pin on my chest, which meant we were an exclusive couple. We were both virgins.

I shouted, “You’re hurting me; let me go.” I wrestled with him and screamed.

He pulled me off the bed. His hand held both my wrists, while he placed the other across my mouth to silence me. Hauling me into the bathroom and shoving me against the wall, he removed his hand from my mouth, forced it open and kissed me in a way my boyfriend never had. As he ripped at my clothes, he groped me.

Nothing deterred him. I kicked him between the legs – the way I learned to do “the kick” in my college physical education course, along with how to look lady-like on a moving train and lift a suitcase to a shelf over my head at the same time.

Abruptly, Harold stopped. Without a word, he left. I was dazed. Minutes went by, but I knew it would be a pivotal turn in future relationships. This aggression was new to me. It made me feel ugly and dirty.

Then he called my name from outside the back door. He said, “See you later tonight. 8 o’clock will be good.“

“Over my dead body,” I exclaimed, quickly locking the door.

The cord of the iron was still plugged in the wall. I unplugged it and put everything else away. I walked into my sister’s bedroom. The bedspread was a mess. I wondered if I should tell my parents or my boyfriend?             I decided to tell my parents. I walked 20 minutes from our house downtown to my father’s Army and Navy store. Dad was with a customer. Mom, his bookkeeper, was in the backroom. I asked if they would come sit in the back where there were chairs. I told them. Dad’s face got red; he was furious. He wanted to kill him.
Looking directly at me, Mom said, “Who would believe you?”
“Do you?” I asked, upset.
“That’s not the point.”

My father’s breaths were long and heavy. He headed to the front door. “I am going to get that bastard right now.”   My mother stopped him. “Calm down. There’s nothing you can do. It’s a small town. People will talk.”   I looked at her aghast. She stood her ground, all five feet of her. “It’s not that we don’t believe you,” she said. Mom was in charge – we’d nicknamed her the “General.” Dad was the breadwinner. He exhaled and turned around.

In our house, tradition and harmony were valued at all costs. I was made to baby-sit that night, as if nothing happened. I sat frozen in his car with no conversation as he drove me home. I wasn’t visibly scarred or bruised, but the wound went far deeper.

Because of my mother’s reaction, I never did tell my boyfriend. We broke up the following year, when he told me, “You can’t love me the way I love you.” I didn’t understand what he meant.             When I was in my thirties, my niece had a bat-mitzvah in Philadelphia. I didn’t know it but Harold and my cousin, who’d years ago moved to Boca Raton, had flown in for the occasion. I walked over to the reception table to get my table number.   I’d vowed to myself to never be within a foot of him, be in a room alone with him, visit their house or go to any of their family occasions.   My older sister, who I’d looked up to, seated me not only at the same table with them but had placed me next to him. I had assumed my parents had told her and couldn’t believe she had betrayed me. I was infuriated, but couldn’t show it. I said nothing, excused myself a number of times and left early.

One day, my sister and I were alone together. I confronted her. “How could you have seated me next to Harold when you knew what happened?”            “What are you talking about?” she asked.              When I confided in her, I discovered my parents had never told her. Learning she was not a silent collaborator alleviated some of the pain.

Until my 40’s, I continued to date men looking for Mr. Right, but I was looking in the wrong direction. At 41, I met Mrs. Right. She brought much-needed love, trust and stability to my life. Bottom line: she believed me.

Not long afterword, my sister orchestrated a meeting with my parents and me. Not surprisingly, our relationship had become strained over the years. I spoke first. I reminded my mother of what she had said at the time and how she and my dad had insisted I babysit that night.
My mother, the stoic, said, “I was trying to protect you.”              “From what?” I protested.

“She was trying to do what she thought was best for you,” Dad said, as he pulled his handkerchief to his eyes.

Unfortunately, my sister and parents remained friendly with my cousin and Harold. I had wished they hadn’t. One day, my sister reported to me that my cousin asked her and my mother about the unease she sensed I felt around him.

Mom said, “It happened years ago,” and changed the topic to avoid more questions. Their conversation went no further.

I knew it was a big stretch for my mother to go from denial, as if it never happened, to “it happened years ago.” That was when I began to heal. After all, she was only seven years old when women got the right to vote. However, I still needed to let go of my anger towards Harold. I had been holding onto it for decades.

In 2000, I was 55, and my niece was getting married in Massachusetts. This time, I knew they were invited and planned on attending. My girlfriend and I had been in a committed relationship for years; we role-played on the drive from the city. I was prepared to confront him. I didn’t want an audience. It would be only him and me.

My cousin stood in the back talking to my sister.

My head bent down. I said, “Many years ago…”
He interrupted me. “Whatever I did, I’m sorry. I don’t remember.”   A flash of pent-up fury surged. “Is that all you can say?”   I lifted my head and looked at him. He eyes were sad. There was no hint of surliness. He was balding, older and plumper. His fingers in his right hand held his shaking head as if he were confused.

He was in his 60s when I learned he had been diagnosed with Alzheimer’s. I will never know whether he was sorry for what happened or sorry he couldn’t remember. It was not the closure I had wanted.

I was 71 when told of his recent death at 83. I felt relief. When my sister described some of the details of his funeral to me, she added, “I still have guilt about what happened.”

At first, I glossed over her comment, not wanting to disturb my psyche with bad memories. However, I couldn’t stop the flashbacks.

Two weeks later, I asked her what she meant, for I thought I had forgiven her years ago.

“For not taking you seriously,” she said.

Tears welled up in my eyes. At last, I thought, here was closure. But, I wonder: what about the rest of us, for, as the hashtags remind us, silence is no longer an option.