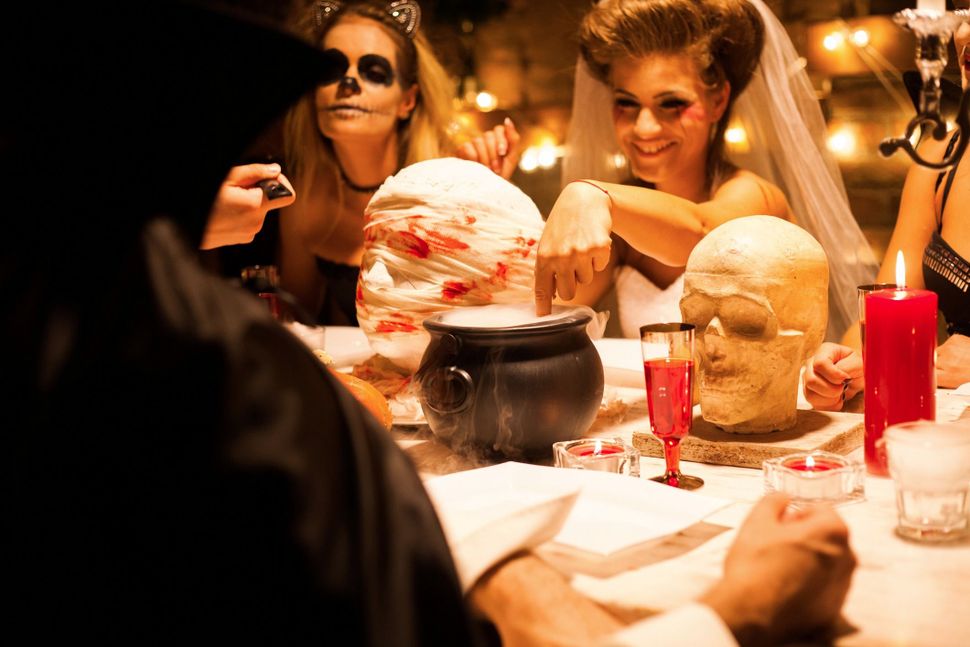 I hate Halloween, though I’m unlikely to mention it to you in person.

Let me explain why.

My Dad is a Holocaust survivor. He was born just as the war was ending, and he spent the first several years of his life in a rat infested refugee camp in Austria. His parents had spent the last six years in hiding of various kinds in Russia and other countries while most of their friends and family were killed in horrific ways. I grew up steeped in the Holocaust awareness that was the fate of many people of my generation who attended Jewish day schools, where we watched films of starving camp inmates and piles of dead bodies.

The possibility of irrational horror arising from nowhere and swallowing up all that is good in the world was one I acquired in childhood, then, had it not in all likelihood already been written epigenetically in my very DNA.

As a child, I was absolutely terrified by horror movies, or even by posters or advertisements for them. Posters which showed the madly grinning skull, the hand clutching the blood-soaked knife, the soul-less killer arising from the shadows.

As a pre-teen, I became fascinated, for a while, by horror films. I found them so unsettling, and that dark, horrible power drew me in like a scab I wanted to scratch, or a car accident I just had to look at. For a couple of years, I read Stephen King novels and watched The Changeling and The Omen and such films almost, well, religiously. I stayed away from the goriest because I never had the stomach for it, but I was fascinated with the horrifying, the irrationally evil.

That phase ended by my teenage years, when I developed an aversion to the cinema of fear.

For many years, I gave Halloween hardly a thought until I became a father.

I find now that my feeling of aversion extended beyond horror films and books to any of the paraphernalia of fantastical terror. I have a hard time imagining why I would want to expose my son to images of murder, death, evil, and supernatural terror for purposes of recreation.

I know in my bones that irrational evil, horrific madness, and relentless sadism are not confined to the realm of imaginary “thrills”, but are real, daily actors which slouch and lunge across the human stage.

Since becoming a journalist, my sense of this has only increased, my subconscious haunted by militias who maim, kill and rape; by a woman this week who put her two toddlers in the oven and turned it on, or the elderly obese woman who killed a nine-year-old by sitting on her as a punishment; by the Burmese military killing babies in front of their mothers as they are being raped.

Is it strange of me to be reminded of all of this when I am driving down the street and see a lawn decorated with fake pieces of dismembered bodies, by windows housing gleefully smiling ghouls with sharpened scythes, or smeared with pretend bloody handprints of imaginary victims? Do I just have some mild form of PTSD, perhaps?

Some of you will no doubt think so. It’s all in good fun, you will say. Aren’t you reading too much into plastic skeletons and rubber spiders, “witches” and vampires? Well, cartoonish Halloween stuff wouldn’t bother me, and nor would folk artsy skeletons a la Day of the Dead.

It’s the increasing adult investment in Halloween, which for a week or two makes “horror culture” pervasive and provokes competition for the coolest gory and menacing symbols of madness, supernatural or irrational evil, and violence. My feeling is that it is other people who are not reading enough into these things, that it is the ability to celebrate and enjoy images of violence and evil that signifies an excess of superficiality, not that it is me who feels or thinks too much.

I wonder if there is a secret society of Halloween haters motivated not by religious objections, not by nausea at the capitalist excesses of our civic festivals, or even by distaste at the ever increasing sexual objectification of its female participants, however reasonable some of those qualms may be.

I also wonder if, in our culture where trigger warnings are slowly proliferating, there will ever be a concerted objection to festooning the urban landscape with images of blood and terror.

A couple of years ago in Germany, when parents objected to a giant billboard of a leering, decomposing skeleton head hanging above their children’s school route, there was a loud backlash about “freedoms’ and the sign was kept up. (It was an advertisement for Iron Maiden’s last album.) What a strange world to live in when the freedoms of adults carry so much more weight than the pedagogy of children, so much more gravitas then the natural concern of parents to not giving them more nightmares than the world has already promised.

I also understand that Halloween may be a kind of blues; perhaps by hanging images of our worst fears out on the street and wandering around at night, we purge or soften our internal horrors.

But I’m not convinced.

This Halloween, I won’t play with toy guns or swords, nor encourage my son to, and I won’t turn my garden into an imaginary dungeon for people to laugh at the cleverness with which I strewed shackles and instruments of torture among the flowers.

Call me a buzzkill as you will, but in a world too full of real horrors, I’ll take my entertainment elsewhere.