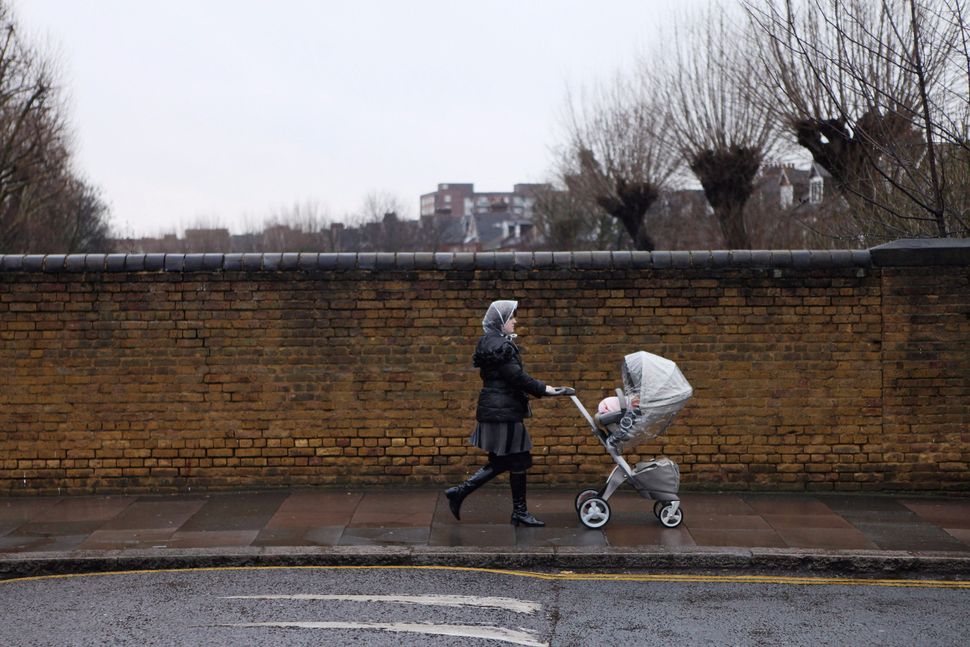 About 10 years ago, right around the time the tectonic plates beneath my structured world began to shift, eventually destroying my entire existence as I knew it, there was a campaign in my hometown of Kiryas Joel and beyond to “save the neshama of a young girl.”

The young girl, a toddler at the time, was the daughter of an old school friend of mine, with whom I have had little contact since high school graduation. Flyers beseeching fellow villagers to contribute to this holy campaign were everywhere, and my husband was invited to a tay uvent, a tea party, where money was to be raised for this special cause.

She refuses to go to the mikveh. She wears usgeshnitene, cutout, tops and short, short skirts. She wants to wear pants. She wants to be a total goy. Rumors abounded. I remember being upset — not at my former friend, let’s call her Blimy — but at the audacity of practically everyone around me who intuitively knew that tearing away a daughter from her mother was the righteous thing to do in a situation where the mother veered from the beaten path, or didn’t hide her transgressions well enough. I didn’t know the details of the case, but no one else did either.

But had this campaign taken place four years prior, when I was still fully ensconced in my hometown — the only world that truly mattered — I would have been vying for a spot at the mill, ready and willing to churn it with the rest of the community. I would have likely asked my husband to rally behind the poor guy whose wife has strayed and who is now seeking a divorce and custody of her child. “Save the poor yiddishe neshama!” would have been a battle cry I could recognize and support.

Was I an evil Maleficent who wished ill upon a young girl? I don’t think so. The idea that our way was the only way to live was so deeply inculcated in me from the day I was born that I could not see the evil hiding in plain sight.

Watching the film “One of Us,” the new Netflix documentary that follows three individuals trying to leave their Hasidic communities, I was reminded of a time when I, too, wholeheartedly believed in the moral righteousness of saving children from their own parents to ensure they do not fall prey to the big, bad secular world. There was a time when I did not and could not recognize how unnatural it is to reject one’s own offspring.

As a former member of the Satmar Hasidic sect, I know the subject matter intimately. The film — the second major documentary by filmmakers Heidi Ewing and Rachel Grady, of “Jesus Camp” fame — seeks to depict the trials and tribulations of individuals who wish to leave their ultra-Orthodox communities. One of the three protagonists is Etty, a young, vulnerable mother of seven who wants out of an abusive 12-year marriage and is fighting against her husband for custody of her children.

As a film, ” One of Us” accomplishes what it set out to do: Tell three stories that are somewhat representative of the collective OTD struggle.

But outside of its perceived message, the documentary is a searing indictment, not of a community and its flock, but of an indoctrination that is so vast and so deeply ingrained in a peoples’ mindset that nothing — not even a mother’s right to her own flesh and blood — can override it.

Etty’s is a gut-wrenching story: In the process of leaving the marriage, she discovers her own need for self-exploration. She wants out not only from the marriage, but also from the shackles of the community. She seeks to expand her worldview, to educate herself and her children. And, as often happens in situations where one pokes a hole in the bubble, change is inevitable.

In her quest for more freedom, Etty winds up at Footsteps, the not-for-profit organization that helps individuals leaving the fold. There she seeks advice and support. Footsteps figures prominently in the film, and those who seek to destroy Etty and remove her children from her care take note of her frequent visits. It is viewed as, and perhaps leads to, an infraction of the “status quo,” an oft-used motif in custody cases, where the parent who maintains the status quo for the children’s sake is favored. Her involvement in Footsteps seems to be a catalyst for the final court decision: the removal of Etty’s children from her home, and their separation from one another. The father is denied custody of the children as well.

Etty is seen being harassed repeatedly by her family members and by community do-gooders. She fears for her life when men come knocking on her door, peeking through every window in the house, attempting to scare her into giving up, as she puts it. In one heart-rending scene, we can hear Etty calling a friend on the phone to tell her that she was knocked over on her bike. “He warned that he will hurt me,” she sobs, saying they want to get rid of her so that they can take the children.

Sadly, when Etty told a friend that her own parents and siblings were in the courtroom to testify against her, I wasn’t shocked. This is not at all uncommon, and it is a scare tactic that parents use to keep their own children in check. It is absolutely abhorrent and morally indefensible, but it did not happen overnight, and I can guarantee you that the parents are, deep down, not doing it out of malice. This behavior is a byproduct of the indoctrination they have been indirectly fed their entire lives: that keeping children in the ways of the Torah is more important than love for one’s own child. Tribe before offspring.

This film is an indictment not an entire people who, for the most part, are kind, compassionate and mean well -— a group I once belonged to and identified with —- but of a small group of malicious men who view the community as their own chessboard.

These men, so-called undreyers, or machers, are often rich and respected. They use their deep pockets and the community’s gullibility to manipulate the backstory and to appeal to the religious sensibilities of the masses. They use an already corrupt family court system, whose judges rely on the rapidly growing Hasidic population to vote as a bloc, to their advantage. They will raise money and hell to hire the finest lawyers to defend the more religious parent. Saving one’s child from modernity or secularity is, to them, their ultimate moral duty, and a neat tactic to keep the game going.

I’ve heard so many horror stories of parental alienation, and I’ve been privy to a few conversations with women who are in the midst of this battle. If there’s a truth that needs to be blasted on loudspeakers, it’s that the brainwashing of a people to the point where their religious ideology supersedes basic human decency — like a parent’s inalienable rights to her/his children if she/he is deemed to be stable, loving and able to provide — is unforgivable.

There is a growing contingent within many Hasidic communities of parents who do not wish to subscribe to this behavior. These parents put child above religious convictions and choose to love their children unconditionally. There are cracks in the foundation from which reason is beginning to seep through. The parents of Ari, one of the individuals the film follows, support him, pay for his addiction rehab, and seem to wholeheartedly want what’s best for him. I’ve seen it in my own family and in relatives’ families. This is good. This is progress. But until the day that a community and its parents stop supporting the removal of children from their rightful care because one of the parents chose a different path in life, until such a day, there will be no justice.

I’ve seen the film being roundly criticized by some within and outside the ultra-Orthodox communities. To those I ask: Why are you defending a lifestyle, seeking to nitpick or cast blame, but ignoring the evil itself? No, the film wasn’t a complete portrait of a community. How preposterous to expect a 90-minute documentary to cover all the nuances of a lifestyle that we intimately understand but that is so foreign to outsiders. Sensationalism sells, sure, but we all know that these stories happen, repeatedly, and that holding it up to the light might put pressure on machers and the court system to be more just lest they, too, are exposed.

What now, you may wonder. How do we change the narrative and help the Etty’s of the world? I don’t know the answers. I’m not even sure Etty’s case will benefit from the exposure — though I certainly hope it does. But what I do know is that we must level the playing field, and the only way to do that is to fill the pockets of those who are capable of defending the Etty’s.

There will be many philanthropic individuals who will wish to do the right thing after seeing the film. I strongly urge Footsteps to make this — the financial and legal support of individuals fighting for custody — a budgetary priority, so the next victim stands a chance of winning. I urge the greater Jewish community and its lofty organizations, of which there are many, to consider the plight of these mothers and fathers as a critical investment and a moral duty. And to the greater Orthodox community, I say: It’s time to take a stand.

​Frimet Goldberger is a freelance print and radio journalist, and a business owner. She is a regular contributor to the Forward, where she covers important issues within the ultra-Orthodox and Hasidic Jewish communities.