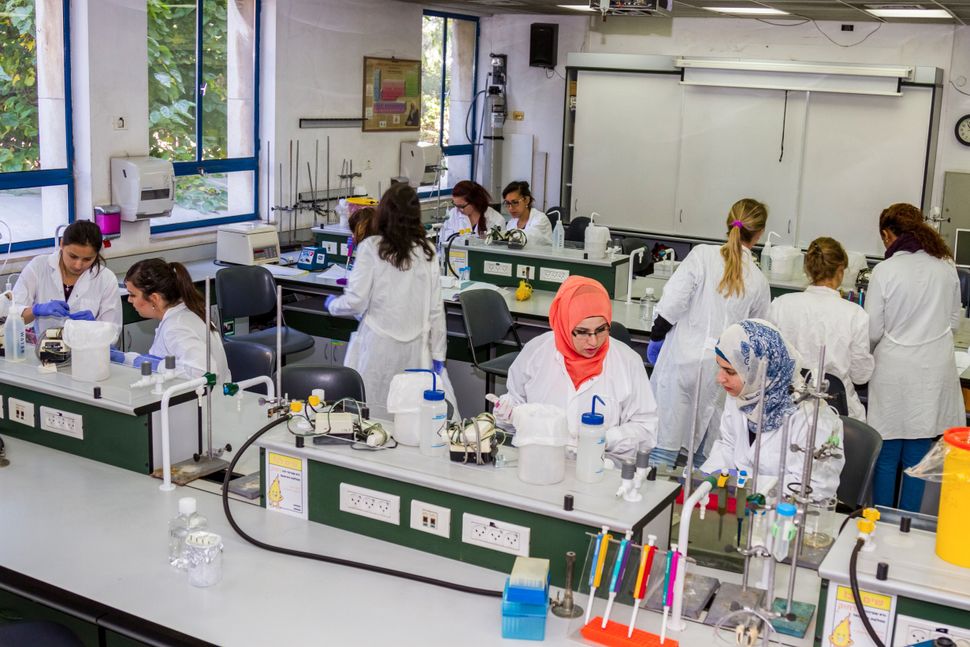 Within the cannabis industry, it’s well known that Israel is leading the world in medical marijuana research. The tiny country is home to a fully legal medical cannabis program that serves 30,000 patients, while THC itself — the cannabis plant’s main psychoactive compound — was discovered by renowned Israeli chemist Raphael Mechoulam in the early sixties. Unlike in the United States, where weed remains illegal under federal law (despite state policies), in Israel, the government sanctions growers, scientists, techies, and doctors to collaborate and advance cannabis medicine.

And so, despite that cannabis for recreational purposes remains illegal in Israel, the plant is well-respected within the fields of science, medicine, biotech, agriculture — and even academia.

This coming semester, the Jerusalem-based Hadassah Academic College is offering a course on medical cannabis for up to 90 students.

“The development of medical cannabis here in the country is one of the most advanced in the world, and we felt it was important to offer through our college this type of specialty for [something] that really offers a number of jobs in the country,” Professor Bertold Fridlender, president of the college, tells the Forward. Hadassah is a career-oriented school that focuses on helping students find jobs upon graduation, he explains. Some students may want to work in the cannabis industry.

The lengthy course syllabus begins with the cannabis plant’s 6,000-year history, before diving into the chemistry of the plant, its legality, its various usages both socially and medically, different methods of consumption, driving under the influence, side effects, current research, the black market, distribution, its role in food substances and cosmetics, and its role in various medical fields like oncology, neurology, psychiatry, pain management, and so forth.

Professionals from different fields will also be invited to give guest lectures, explains Dr. Michael Dor, director of Hadassah’s “Medical Cannabis Entrepreneurship” course. Having served for the last four years as the senior medical advisor to the cannabis unit under the Israeli Ministry of Health, Dor says his goal for the course is “to teach as much as possible in all places about medical cannabis.” Doctors, agricultural experts, lawyers, and more will be give lectures on the areas of cannabis that touch their specific fields. “This is very important since we want cannabis to be a medication,” he says.

The students taking the course come from as diverse backgrounds as the lecturers. Open to undergrads and grad students, as well as professionals, students have the opportunity to collaborate with one another and explore each other’s various fields. “Partnerships are established between farmers, physicians, and lawyers. They form groups, and continue to work as a group,” Dor says, speaking from past experience. (This is the third semester the course is offered.) Even after the course concludes, the relationships students build within it remain active.

“I think our strongest point is the cooperation, the gathering together of professionals from different professions, while teachers from different disciplines give lectures,” says Dor. “It’s a very integrated course with a lot of perspectives.”

Some of the lectures will even be given by medical cannabis patients, or the physicians who treat them. They talk about their experience, difficulties, and the advantages of cannabis treatment, Dor describes. The course surveys how cannabis can help with various conditions like cancer, PTSD, autism, fibromyalgia, psoriasis, children’s intractable epilepsy, bone and muscle diseases, irritable bowel syndrome, and intractable pains. Moreover, Dr. Dor aims to present a balanced approach: He even invited a psychiatrist to give a lecture against the use of cannabis, and about its less favorable side effects.

“Everybody who comes to the class, after graduating, is going to go into their own field to implement the knowledge,” Dor says. “The farmers, the lawyers, those who create startups, the physicians who go to patients — each one of the students gets their own knowledge and uses it.” The information taught throughout the course influences not only the students, but those with whom they end up working. Indirectly, the course can educate the Israeli public more broadly.

And beyond coming from diverse professional or academic backgrounds, the students also come from diverse demographics. Half the students at Hadassah are the first in their family to pursue a college degree; 20 percent are Christian and Muslim Arabs (half of whom are Israeli Arabs, the other half from East Jerusalem); 80 students are Ethiopian Jews; 900 are Haredi ultra-Orthodox (70 percent of whom are women); and 164 are new immigrants.

Luckily for the college, the course has so far not been met with any controversy or criticism. “There is stigma [around cannabis], but today I have a new problem: I need to convince people that cannabis is not the cure to everything in the world,” Dr. Dor jokes. “It’s a sexy subject.”