Is Drinking Alcohol A Rite Of Passage Into The Fraternity Of Orthodoxy? 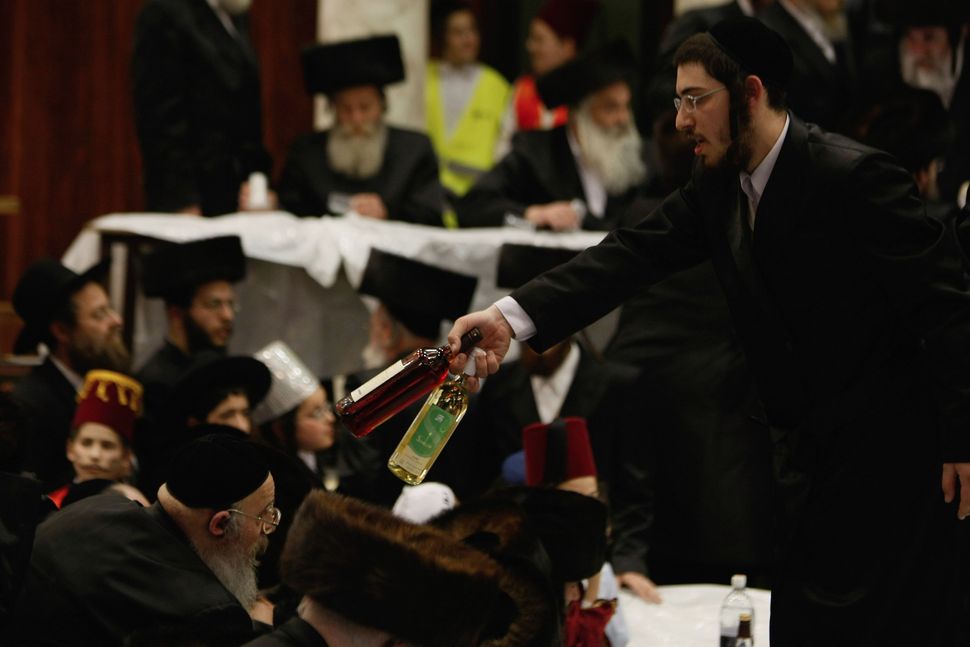 This past Simchat Torah, a friend and I watched warily as one of the congregants, usually a composed professional type, staggered around the front lawn of the synagogue, drunk and mumbling to himself.

Inside, the other men of the congregation were bidding on aliyahs and other honors for the upcoming year, their wallets loosened thanks to generous amounts of alcohol distributed around the room before the auction. Listen, it was a smart move for the synagogue to serve scotch; my own husband, who had promised to make no bids that morning, came outside after the auction, glassy-eyed, to tell me about the generous donation he’d made.

But it wasn’t the donation that bothered me; if we have it to spare, I’m glad to donate to the community.

But seeing the majority of husbands and fathers in various states of intoxication made me feel uncomfortable, even unsafe. So did hearing that, the night before, the alcohol flowed so freely that even pre-teens were given samples. But what most threw me was that almost no one else seemed bothered by this. To them, the frat-party energy was completely normal.

The Talmud says, “There is no joy except in meat and wine,” and in today’s Orthodox culture, the Talmud is taken at its word.

Between the liberal amount of l’chaim’s at every shul kiddush, wedding, and holiday, the custom to drink on Purim until one “can’t tell the difference between Mordechai and Haman”, and the glamorization of alcohol in the greater culture, drinking has grown excessive in the Orthodox world. I have had guests leave my Purim feast to vomit in the driveway, and seen teenagers drinking themselves sick. The police in local Jewish communities now know what time of year to issue warnings against drunk driving due to the increased number of alcohol-induced traffic fatalities. Knowledge of exclusive single-malt liquors are now a matter of pride for many Jewish men who display them in their homes, while pre-teens as young as twelve attend Bar and Bat Mitzvah parties with the goal of getting as drunk as possible.

Jewish rituals involving alcohol (such as the four cups of wine on Passover) suggest the Torah’s boundaried approach to drinking, while authorities such as Rabbi Shneur Zalman in his Shulchan Aruch HaRav maintain that “It is impossible to serve God either in levity or drunkenness.”

So it’s not Jewish tradition that calls for drinking to excess, but rather a shift in societal attitudes. Historically, Eastern European Jews were wary of non-ritual drinking after seeing the effects of alcohol on their non-Jewish neighbors (and, sometimes, their own property). They prided themselves on sobriety.

In modern America, however, the view shifted to permissive, then to encouraging. Now it’s essentially a rite of passage into the fraternity of Orthodoxy.

While many factors contribute to addiction, it’s no mistake that alcoholism is at the highest rate it has ever been in the Jewish world.

And exposure to alcohol at younger ages, accepting attitudes around it, and alcohol’s omnipresence in modern Jewish life stack the odds against fledgling alcoholics. As for Jews in the grip of addiction, getting sober means risking the loss of camaraderie and the sense of belonging inherent in the multitude of religious activities with drinking as the centerpiece. I once sat at an AA meeting in Jerusalem where a well-known rabbi spoke about being unable to get sober because, “How can I not be a part of it?”

There is no easy solution. Our teachings lean toward moderation in regards to alcohol. (One rabbi tried banning it from his synagogue and felt the red-hot wrath of his congregants.)

However, we can take stock of how large a role alcohol plays in our communities and be willing to make changes if necessary. Certain synagogues have invited Alcoholics Anonymous or JACS (Jewish Alcoholics, Chemically Dependent Persons, and Significant Others) to hold meetings in their buildings, acknowledging publicly that alcoholism is present in the Jewish world, and that alcohol is a drug as addictive as any other.

Most importantly, we should consider what purpose alcohol truly serves. After all, what need is it filling? Perhaps this is an opportunity work toward a more authentic religious and communal experience, instead of using alcohol as a social lubricant and synthetic distraction.

Rea Bochner is a writer, blogger, and regular contributor to AMI Magazine. Her work has appeared in the New-York-Times-Bestselling “Small Miracles” series and other short-story anthologies. Rea’s debut memoir, “The Cape House,” was released in February 2017. Visit her at reabochner.com.

Is Drinking Alcohol A Rite Of Passage Into The Fraternity Of Orthodoxy?