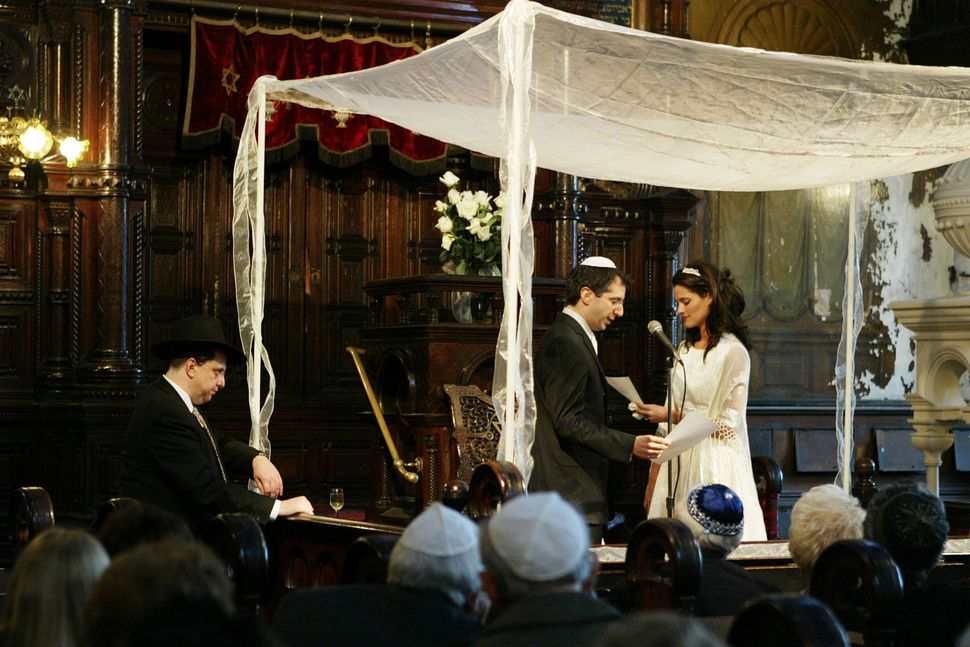 When the United Synagogue of Conservative Judaism recently announced its rebranding, affirming Conservative Judaism as “dynamic and authentic,” it had the potential to be a turning point for the movement. Its earlier tagline, “tradition and change,” not only was uninspiring, but also failed to capture the very humanity of our people’s search for meaning and connection at the heart of Judaism.

This new phrase — more than just a word shift — contained a message of a living, breathing Judaism; for me, the phrase “dynamic and authentic” most closely expresses what I believe Judaism has been for centuries, and how the Conservative movement can be the best resource we have for accessing Judaism’s dynamic rhythms, its authenticity of connection.

Not long after this step forward, however, the movement then reaffirmed its ban on intermarriage in a letter signed by all four major movement leaders. This letter wasn’t just a reaffirmation of its commitment to traditional Jewish law. For most non-Orthodox American Jews, it was a statement that the movement truly is conservative in all the ways we understand that word today. We live in a world of deep polarization that vastly transcends the political divide in this country. This is the age of culture wars, of two distinct moral narratives in this society, liberal and conservative, that are constantly in conflict. While the liberal narrative espouses values of egalitarianism and justice for the oppressed, the conservative one lifts up respect for authority and loyalty to traditional ways. Through its intermarriage letter, together with other approaches to issues of Jewish identity and continuity, the Conservative movement affirmed its side in those culture wars.

The first problem with this choice is that the very signers of this letter themselves are not adherents to the cultural conservative narrative. Like most members of Conservative synagogues, they are “liberal Jews” in that they inhabit a narrative that celebrates Judaism’s insistence on social justice. Like all cultural liberals, they believe in social progress. They passionately long for a Judaism that evolves dynamically to meet changing circumstances. Nevertheless, the letter — and therefore the movement itself — reflects the wider American conservative narrative: a digging in of the heels in the face of a rapidly changing world, an insistence on loyalty to inherited ways, and respect for the authority of power hierarchies, promoting ideals and traditions even when they disenfranchise or discriminate against individuals and groups.

But it doesn’t have to be this way.

In all my years as a congregational Conservative rabbi, I taught a different narrative of my movement, one that I had learned at the Jewish Theological Seminary.

It’s a narrative that I believe lies at the core of what the movement was always about, but has failed to represent effectively in our time — namely, the dynamism and authenticity of our inherited tradition. Our movement can bring us to the bold and passionate ways that the ancient rabbis, most notably in the Talmud, fearlessly grappled with their changing world. Yes, their job was to “conserve” the traditions of their ancestors. But their primary goal was to translate that tradition into different forms and idioms over time — sometimes even abandoning time-cherished practices as circumstances required. The moral narrative of these ancient rabbis was not “conservative”; quite the contrary, they were radicals. Revolutionaries. They did, indeed, conserve tradition. But for them, it wasn’t about tradition for tradition’s sake. Tradition was the God-given brushes, canvas and oils. Torah was the work of art itself. And at the end of the day, the point of Torah is to connect human beings to God, to each other and to the world.

The Conservative movement traces its roots to a reaction against the abandonment of tradition by the 19th-century Reform movement. It represented an affirmation that tradition could indeed be lived, even in the modern world, and that it could embrace modern sensibilities. However, like all conservative movements, political or otherwise, the initial gesture of the movement, albeit justified, was reactive. In our time, reactive positions against the liberal mainstream’s notions of progress could be the movement’s fatal flaw.

These times represent a moment of reckoning for the movement.

Is it a movement that reacts against the excesses of progressivism, or is it a proactive force for confident, authentic progress in observant Judaism? The movement has always contained both energies.

But the time has come for the movement to choose a side. If it wishes to survive, it must choose the side of cultural progress. Asserting halachic norms that the majority of American Jews cannot live by only communicates a movement desperately trying to self-preserve, rather than meet the needs of the Jewish people whom it serves. Bucking the universalist trend of social progressivism communicates a movement not only out of sync with its culturally liberal base, but, in fact, also out of touch with the ancient rabbis’ forward-looking spirit.

The truly healthy path forward is for Conservative Jewish leadership to embrace the dynamic/authentic narrative of the movement, as opposed to an anxious fear-of-change narrative. The leadership should celebrate the dynamism and authenticity of our rabbinic heritage openly, loudly. This includes not only welcoming the possibility of recognizing intermarriage within a traditional framework, but also synagogue communities embracing more diverse members, pushing time-tested religious boundaries, and new ways for rabbis to wed traditions and modern sensibilities.

At the movement’s convention next month in Atlanta, the emphasis will be on renewal and innovation in Conservative Judaism. (I will be leading the USCJ’s “Innovation Labs” project, which is designed to tackle these issues in the movement.) But unless the movement can address its conservative countervalence, those conversations are liable to prove ineffective. Furthermore, the term “innovation” itself is a misnomer. Judaism has always been essentially innovative, and the time has come to assert that any values-narrative that stands in the way of the progress of Torah from generation to generation is out of sync with who we are.

In the culture wars of our times, Jewish people time and again ask themselves, “Whose side of history do we want to be on?”

Like it or not, non-Orthodox Jews believe that the winning side of history lives in the liberal narrative of moral progress and social justice. Luckily for Conservative Judaism, the ancient rabbis lived by that same progressive narrative, and the name of that narrative is the Torah itself.

The Conservative movement must overcome its own conservatism and inspire not just movement adherents, but also all Jewish people to the dynamic and authentic force that rabbinic Judaism has always been. Only then can it be the true inheritor to the vision and genius of our ancient rabbinic forebears.

Gil Steinlauf is the senior rabbinic adviser at Adas Israel Congregation. He is also the co-creator of the United Synagogue of Conservative Judaism’s “Innovation Labs” for Jewish Innovation.