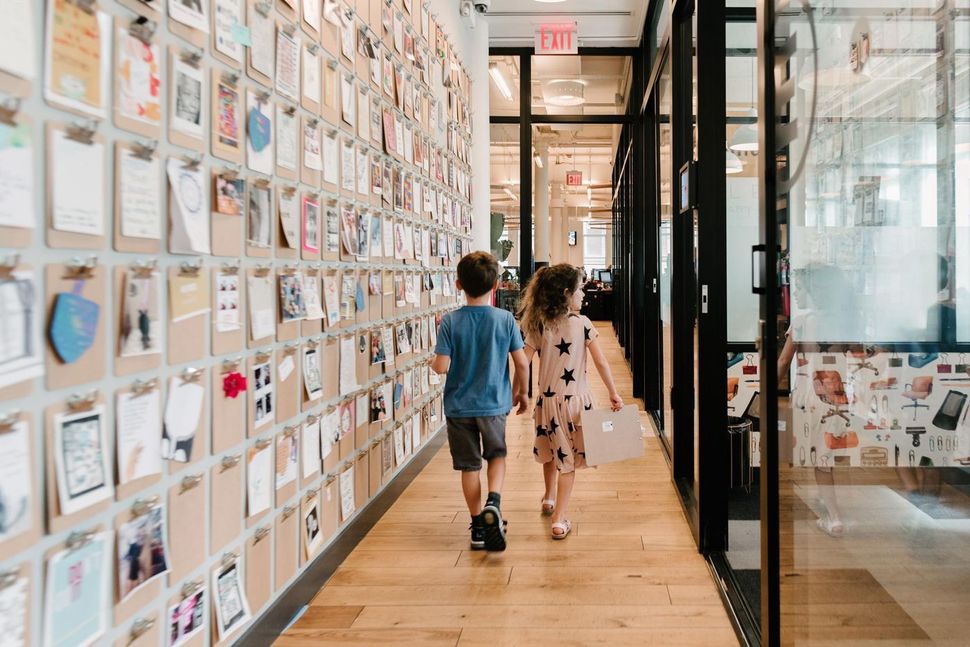 If you’re a parent looking to jumpstart your 5-year-old’s entrepreneurial career, Rebekah Neumann, co-founder of WeWork, has the school for you.

Neumann announced this month that WeWork — the very same company that she launched with Israeli-American husband Adam Neumann with the goal of revamping the American workplace, and now has over 110 co-working offices across the world — will now be expanding into schools.

Or, at least for now, one school. “WeGrow” is set to open officially next year in WeWork’s Chelsea, Manhattan headquarters for children ages 3 to 9.

For now, it’s being piloted at a Chabad location in New York City. According to Neumann, she and her husband struggled to find the right school for their daughter when she came of kindergarten age. Children, she said, “are natural humanitarians, entrepreneurs and artists.” She hopes to build “a new conscious, entrepreneurial school committed to unleashing every child’s superpowers.” Children enrolled at “WeGrow” will use experiential, hands-on learning and will even apprentice for professionals in their chosen fields. All at age 5.

Neumann studied Buddhism in college and spent time in India, which could explain her holistic outlook on education.“The passion, drive, creativity, altruism and wonder we strive for everyday are all traits that our children naturally possess,” she said. “Somewhere along the traditional educational path, these traits can be lost, and we have to fight to find them again as adults.” She’s not wrong about that. The American education system has long been criticized for its insistence on standardized testing and for holding its instruction to a standard of averageness.

Neumann contracted famed architect Bjarke Ingels, whose plan for the school is similarly hippie-dippie. Ingels’s design, according to a spokesperson, “seeks to undo the compartmentalization often found in traditional school environments, and reinforces the significance of engaging kids in an interactive environment.” The overall goal of the WeGrow classroom will be to “nurture the child’s education through introspection, exploration and discovery.”

Neumann seems to believe that WeGrow can help bring busy American families closer together. “I’m passionate about actually opening these schools inside WeWork buildings, so that parents can bring their kids to school, see them possibly at lunch, maybe bring them home,” she told the business magazine Fast Company.

While the philosophy behind WeGrow is certainly forward-thinking, there are some problematic pieces to the formula. For one, the plan is to attach the schools to existing WeWork locations, and enrollment is open only to WeWork members, which certainly would make for a convenient day care option for WeWork’s customers. But the kinds of activities WeGrow promotes — gardening, entrepreneurship — are already stressed at well-funded private schools and at schools in wealthy neighborhoods where the children of WeWork members (who pay up to $1,000 per month for a small New York office space) probably already can access them. WeGrow isn’t being incorporated into ordinary schools, and surely it’s low-income American children who would benefit from the model the most.

Fast Company asked an educational adviser to Neumann if the bureaucracy of working with the government prevents Neumann from taking WeGrow to public schools. “We want to start now. Ask Zuckerberg what happened to his $100 million in Newark, New Jersey,” the adviser said. According to them, Neumann’s hope is that this model of holistic education will trickle down into public schools. “Starting this way is by far the best way to do it,” they told Fast Company. It’s a bit naive of an outlook, but fair enough.

Also, Neumann’s educational philosophy — the extent of which appears to be contained to a short upload on WeWork.com’s media page — is not all that revolutionary. For years, public, private and charter schools alike have been working to incorporate experiential learning into classrooms across the country. I previously worked as a teacher in one of the poorest public high schools in Memphis, Tennessee, and even at a resource-low school like mine, teachers were constantly encouraged to innovate their lessons.

Then there’s WeGrow’s founding philosophy: to help children start their life’s work early on. Surely, this could put even more pressure on already stressed-out American children. If parents today send their children to schools like WeGrow, they may inadvertently be teaching them that the height of success is becoming a wealthy Silicon Valley tech titan and nothing less.

The American success rat race may be starting even earlier — beginning with 5-year-olds.

Liz Posner is a New York City-based editor and writer who focuses on feminism, education, religion, innovation and lifestyle for Forbes.com, BUST, Bustle, Refinery29, The Times of Israel and elsewhere. Follow her at @elizpos,