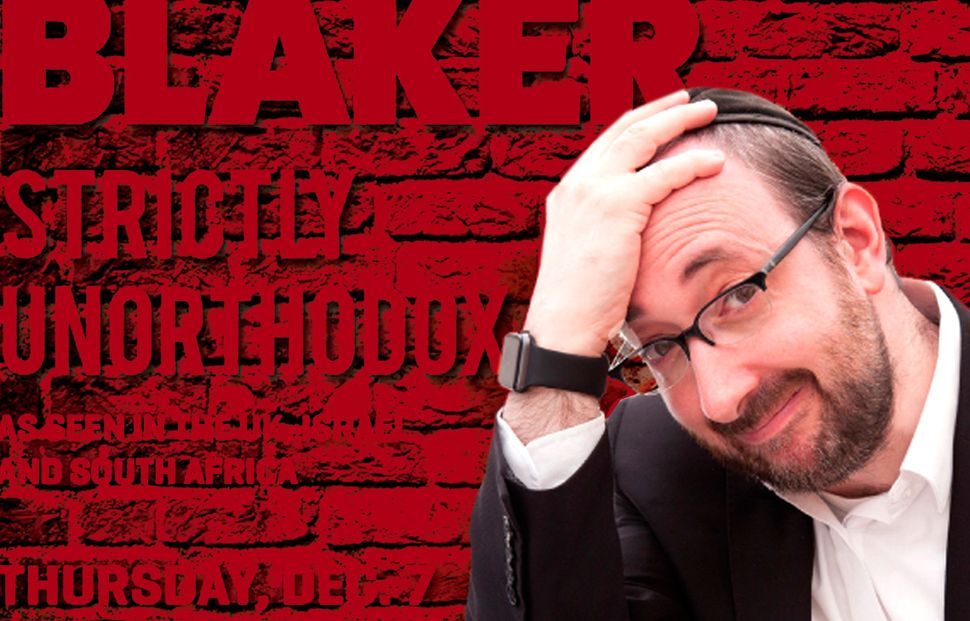 Image by Courtesy of Ashley Blaker

There are many Jewish comedians in show business, but few are Orthodox.

And while most of them live in New York and Los Angeles, the United Kingdom has one of its own: Ashley Blaker, a former BBC writer and producer on the popular show “Little Britain,” and an internationally-acclaimed act.

Now, Blaker is bringing his cheeky brand of Jewish humor to the Gramercy Theater on Thursday, Dec. 7. This will be first time the comedian is performing in the U.S., and he said he is most looking forward to “that all-you-can-eat Eden Wok buffet. They are paying me a lot of money for saying that.”

Blaker, who isn’t afraid to poke fun at the Jewish culture and religion, tells jokes that could make even the most serious yeshiva bochurim giggle.

In one of his gags on music, he says he wouldn’t listen to the band Hot Chocolate until he found out they were made with kosher-supervised milk. Even then, he’d wait a full six hours after listening to Meatloaf. And of course, he wouldn’t put on Red Hot Chili Peppers or Smashing Pumpkins before thoroughly inspecting them for bugs.

Along with his stand-up act, Blaker posts Photoshopped pop culture references on Facebook and relates them to Judaism. For instance, when Parsha Noah rolled around this year, he made a graphic of a “Facebook Safety Check,” where Noah could mark himself “safe” during The Great Flood in 17 Cheshvan 2105 BCE.

In another update, Blaker posted a parody image of “Thomas the Tank Engine” called “Thomas and Chaverim,” in which he made a Rabbi Nachman follower train, a Menachem Mendel Chabad train and a woman train named Shaindel, whose face is blurred out, as is custom in ultra-Orthodox publications.

The comedian calls himself “Meshuga Frum”, and has taken his act to all over the U.K., Israel and most recently, South Africa. He said he decided to play New York because, “Someone told me there were a few Jews in New York. I hadn’t realized this before but I took their word for it and booked the show.”

Even though the Orthodox Jews in the U.K. are dealing with different kashrut agencies, rabbis, cultural situations and politics of their own, Blaker has found that his work is pretty universal.

“It’s really funny actually how when I’ve posted clips online that people from the U.S. have commented ‘Wow, I thought that was just a New York thing,’” Blaker said. “There is a routine I posted about parking in frum areas and people were saying ‘I always assumed that was just Boro Park.’ It turns out we’re pretty similar all over the world.”

Still, Blaker has made sure to tweak some words so Americans can understand him. “Every ‘pavement’ is now a ‘sidewalk,’ every ‘queue’ is now a ‘line,’ every ‘mobile’ is now a ‘cellphone’ and every ‘nappy’ is now a ‘diaper.’ I hope you’re all grateful!”

Blaker wasn’t always “Meshuga Frum”. The husband and father of six, who lives in Edgware, London, became Orthodox fifteen years ago, when he received a free synagogue membership for a year and was persuaded by a welcoming rabbi to pray there.

“[The rabbi] said to me, ‘What are you doing this afternoon? We really struggle on a Shabbos afternoon to get people to come back for mincha [afternoon prayer]. Is there any way you could come? He was so nice and friendly and I’m very bad at saying ‘No,’ so I went along.”

Then the rabbi asked about Sunday morning, since they also had trouble getting a minyan, and then Monday morning, because it was the same deal. “By the end of the week I was going in every day,” said Blaker. “Then I thought I better learn the lifestyle as well.”

Blaker got into performing stand-up comedy “almost accidentally,” he said. He was producing and writing for TV and radio when a rabbi asked him to speak at his synagogue about how he managed being Orthodox and working in comedy. That was five years ago. “I realized that there was a whole routine in it and I haven’t stopped yet.”

After Blaker’s first U.S. show, he’ll go back to doing gigs in the U.K. and working on his new BBC Radio 4 program, “Ashley Blaker’s Goyish Guide To Judaism,” which is set to premiere in the spring of 2018.

As for the Gramercy gig, he’s promising that he won’t even go near Trump material, so the audience can rest easy. “I figure that American comedians are getting a lot of good mileage from your president so you don’t need me to add anything. So this may well be the only Trump-free comedy show in New York this whole year. It’s also the only comedy show where the comedian may join the audience for maariv [evening prayer]. Now that’s value for money.”