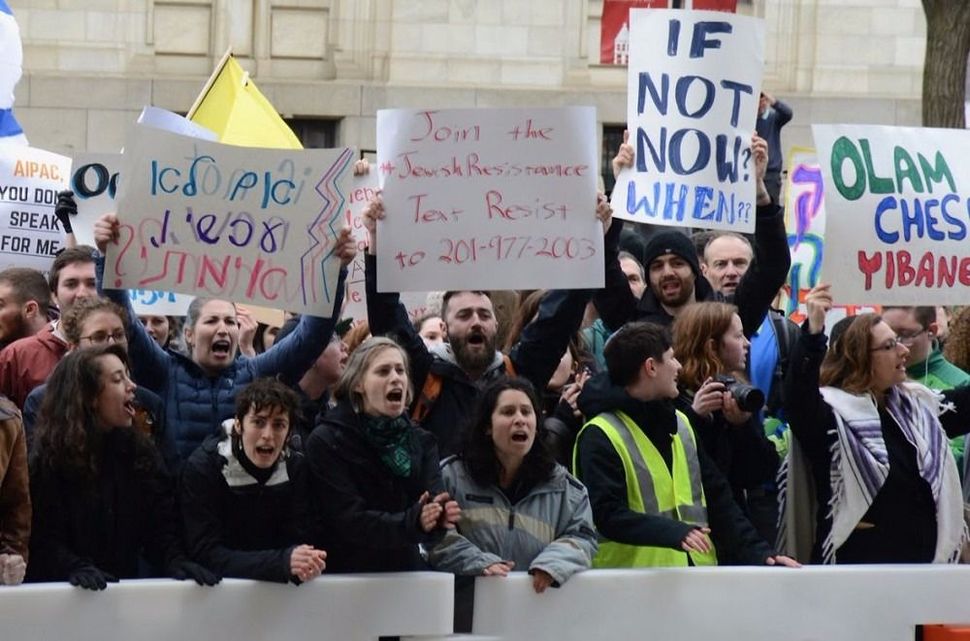 Image by If Not Now blog

As a congregational rabbi and lay leader, we have found that congregants who are resistant to their synagogue working for change in their community often claim that political issues don’t belong in the synagogue. They maintain that synagogues are there to help Jews, not the larger community. Board members raise the possibility of the synagogue losing its nonprofit status. Others who protest focus on their own needs; they come to the synagogue to find the shelter of peace, prayer, and comfort in a chaotic and painful world. They seek to be insulated, even insular—celebrating the sanctity of what they have rather than being shaken and sobered by the justice that society lacks.

But the teachings of our faith and the realities of synagogue life today offer an alternative perspective.

Those who rationalize that praying in a synagogue is the most essential religious act fail to recognize that synagogues have windows for a reason—to move their prayers to action. Windows draw us to connect with our community and remind us that our prayers are not divorced from the world around us. Rabbi Chiya bar Abba teaches in the name of Rabbi Yochanan, “One may pray only in a house with windows” (Babylonian Talmud, B’rachot 34b). The Shulchan Aruch (Orach Chayim, 90:4), the core text of Jewish mysticism, recommends that sanctuaries have twelve windows, symbolic of the twelve tribes of Israel.

In ancient Babylon, Daniel prayed in his room, with the windows opened toward Jerusalem despite a royal decree forbidding worship directed to anyone other than the king (Daniel 6:8–17). Daniel’s commitment to openly praying to God three times a day teaches that Jewish prayer must not be disconnected from the world around us.

The consequences to Daniel—landing in the lion’s den—teach that bringing our faith to action and our prayers into practice is not with- out challenges.

The lion’s den of social justice can be a fearful place. Away from the comfort of the sanctuary and thrust up close to poverty, home- lessness, human trafficking, and other painful realities of social injustice today, we might wish to be praying safely back in our pews. But like Daniel, we must courageously connect to the world in order to heal it.

Rabbi Abraham Joshua Heschel, one of the most influential Jewish philosophers of the twentieth century, understood the inex- tricable link between prayer and the earthly struggle for justice. As one of eleven refugee scholars imperiled by the Nazis in Germany and brought to the United States by the Hebrew Union College, Heschel personally knew the horrors that happen when moral voices speak only inside a sanctuary.

Eloquently articulating a theology of a mysterious yet knowable God with whom we can connect in the world, Heschel taught that the goal of prayer is to actualize God’s vision for justice. He wrote:

Prayer is meaningless unless it is subversive, unless it seeks to overthrow and to ruin the pyramids of callousness, hatred, op- portunism, falsehoods. The liturgical movement must become a revolutionary movement, seeking to overthrow the forces that continue to destroy the promise, the hope, the vision.

Like the biblical prophets, Heschel believed that prayer in isolation is ineffectual and empty. The sanctity of our utterances inside the sanctuary is dependent on our actions outside. He saw his work in the civil rights movement as a means of honoring God in human beings, specifically in the African-American community, which had long endured humiliation and oppression. Prior to attending a White House meeting on racism, Rabbi Heschel sent a telegram to President John F. Kennedy asking the president to make tangible demands at the meeting:

We forfeit right to worship God as long as we continue to hu- miliate negroes. Churches [and] synagogues have failed… . Ask of religious leaders to call for national repentance and personal sacrifice. Let religious leaders donate one month’s salary to- ward fund for negro housing and education… . The hour calls for moral grandeur and spiritual audacity.

Heschel saw social justice as both an act of prayer and an obliga- tion of prayer. Personal action must follow petitioning of the Divine.

Research shows that the majority of Jews today define their Judaism in terms of social justice and attend synagogue at most a few times each year. Keeping synagogues relevant to all these Jews—providing both comfort and civic engagement—requires an understanding of these loosely affiliated Jews, secular Jews, and Jewish millennials.

The Pew Research Center quantified the profound relevance of social justice to American Jews in their 2013 study A Portrait of Jewish Americans. Pew asked nearly thirty-five hundred Jewish respondents across America, “What does it mean to be Jewish?”

For about three-fourths of those surveyed, the top response was that “remembering the Holocaust is an essential part of what being Jewish means to them” (see table 2). Nearly seven out of ten said that leading an ethical and moral life was essential to being Jewish, and more than half cited working for justice and equality. 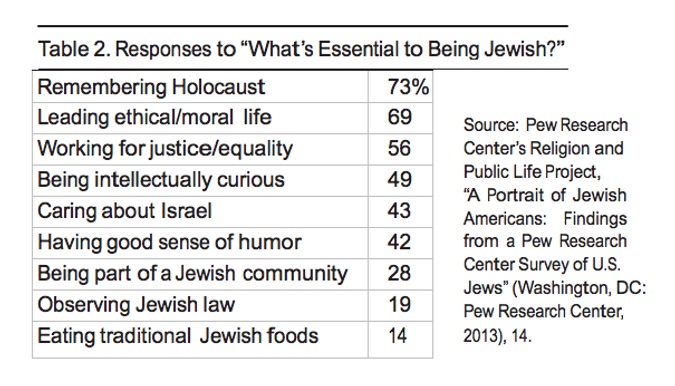 A common question activists ask one another is “What keeps you up at night?” There is no historical event that disturbs our Jewish sleep more than the Holocaust. One lesson of this tragedy is that we must continue to call out sins of complicity and silence when it comes to hatred and discrimination, teaching the wrongs of remain- ing a bystander while elevating the righteousness of those who cou- rageously risk their lives or livelihoods to do what is right.

If we consider the category of “Remembering the Holocaust” as an aspect of this vigilance against injustice, then the top three Pew responses capturing expressions of Jewish identity all reflect an overwhelming commitment to social justice for the majority of American Jews today.

Contrast this to the modern Jew’s less profound commitment to Jewish ritual and Jewish institutions. More than two-thirds of American Jews are not members of a synagogue; 41% seldom or never attend religious services, and another 35 percent attend only a few times per year, combined equaling three-fourths of Jews with loose synagogue attachments at most (see figure 3). 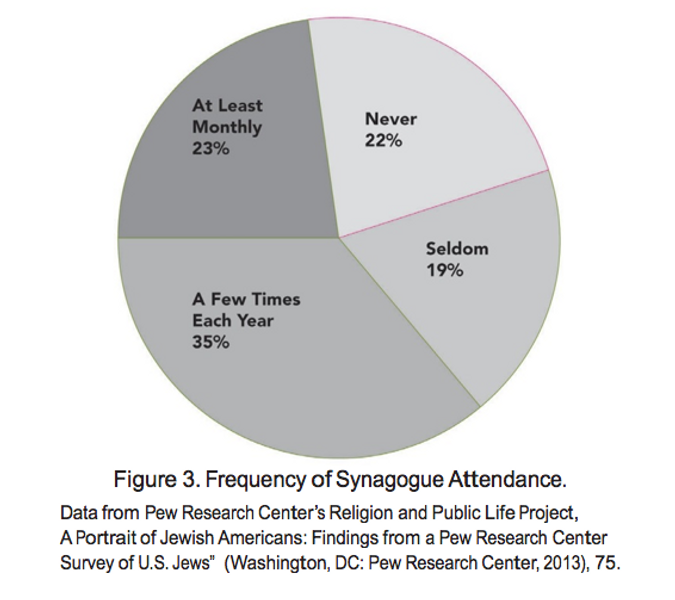 Included in the Jewish population are secular Jews, cultural Jews, and Jews of no religion—collectively identified as the “nones.” They consider themselves as part of the Jewish people and are proud to be Jewish, but do not consider themselves Jews by religion. For about half of these “nones,” social justice is essential to their Jewish identity, and both prayer and traditional synagogue programming are irrelevant to them.

Synagogue leaders worrying about the sustainability of their institutions would be wise to expand the social justice gateways to engage these Jews, who represent 22% of the Jewish community.

The work of civic engagement is attractive to this demographic, but creative outreach and rebranding of the modern synagogue would be required to reach these “nones.” They have already chosen not to participate in the traditional offerings of a synagogue, and their disengagement prevents them from seeing the diverse cultural and social justice offerings now common in synagogues.

Millennials, too, are more inclined to focus their energy and efforts outside the synagogue rather than inside. Millennials — the generation born after 1980 and coming of age at the time of the millennium — are digital natives who find community concerns compelling and yearn to make a difference in the world, yet are skeptical of organized religion.

Only 32% of Jewish millennials see themselves as Jews by religion, compared to 78% of the overall Jewish population. We would be mistaken to assume that this is solely a reflection of their being in the earlier stages of the cycle of life; all American millennials are less religiously affiliated than their peers of the past four decades, according to a separate Pew study entitled Millennials: A Portrait of Generation Next.

Despite their detachment from Jewish institutions, Jewish mil- lennials are proud to be Jewish (96%), and they have a strong sense of belonging to the Jewish people (69%). And, their definition of what is essential to being Jewish mirrors the average: remembering the Holocaust is top, at 68%; leading an ethical life is second, at 65%; and working for justice/equality is third, at 55%(see table 3).

Social justice offers a fertile opportunity to engage the “nones” and the millennials in Jewish life. The potential to reconnect these Jews to our institutions requires rethinking our outreach to address the meaning and sense of purpose that these Jews seek. If we are successful attracting them, the friendships and sense of community that will almost certainly follow will have the power to keep them engaged. Enabling these two demographics—the “nones” and the millennials—to experience a new way of expressing their Judaism in the world outside could inspire them to count themselves among the congregation. But this requires redefining the traditional functions of the synagogue, creating more opportunities to engage outside its walls.

Stephen Phillips, of Temple Beth El in Charlotte, provides a model for redefining religiosity. Unlike his grandfather, who prayed three times each day, Phillips expresses his own Jewish commitment by developing a synagogue advocacy program on aging, serving on SPICE (the committee of seniors), and participating on the Tzedek Council (the social justice committee). These commitments bring him to synagogue almost daily, which his grandson perceives as religious devotion, paralleling how Phillips had viewed his own grand- father. Philips reflected, “My grandson (age eight) says I’m the most religious person he knows. My grandfather davened three times a day. Am I a faker that he thinks that?”

Just as religious devotion can mean worshiping three times daily, it can also mean serving the community to bring the values of Juda- ism into the world. In expanding our definition of being religious, both affiliated and unaffiliated Jews can grow to view civic engage- ment as a fulfillment of the values taught inside the synagogue; it is an obligation articulated in our liturgy and learning.

Political issues belong in the synagogue so that our prayers for justice are meaningful and our synagogues remain relevant to more American Jews.