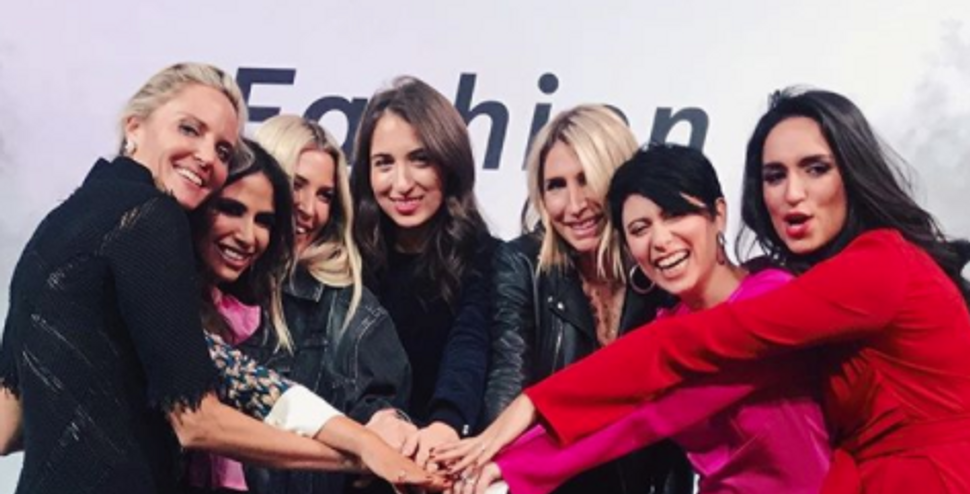 Last Tuesday night at the Mezzanine, a sleek and spare event space in FiDi, Adi Heyman stood on a blue-lit white stage giving direction to Michal Kurtis, a buyer at Barneys; Kim Heyman, a brand ambassador for Israeli designers; and Adena Rohatiner, a celebrity stylist.

Adi Heyman was going through a run-through of her event, Faith In Fashion — a series of two panel discussions discussing Judaism in the fashion industry, how one can navigate the fashion world while staying true to your religious principles. Even though Heyman never attended the Fasion Institute of Technology, proceeds of the event went to the Chabad at FIT.

“I’ve met such incredible Jewish women during my time in fashion,” she told the Forward. “So I thought wouldn’t it be great if we get this collective of women together from all walks of life but united together in their Judaism, [where] their faith is an important part of their story.”

So she put together a panel of Jewish women — many of whom are her friends or who she has worked with in the past (as with Hannah Lancry Sufrin of House of Lancry — the brand Heyman wore while attending the spring shows in September at New York Fashion Week and was photographed wearing by street style photographers from Vogue and T Magazine, among others).

“I wanted to choose people that come from different facets of the industry,” said Heyman. “Whether it’s styling, or a brand ambassador for Israeli designers. I chose them based on what they were doing because I thought they served a significant role in the Jewish fashion community.”

Happy, humbled and thankful to call this incredible collective of talented women my people @faithinfashionny

Like Israeli brand ambassador Kim Heyman (no relation to Adi). Kim did not grow up religious, but she has become increasingly interested in exploring her heritage. “Anything to promote fashion and a love of Judaism is very important to me.”

Although Adi Heyman is an Orthodox Jew and a modest dresser, this wasn’t necessarily an Orthodox or modest event. “Everyone here has a strong connection to their faith,” she said. “But it’s not an ‘Orthodox’ program. And I think that the FIT students [in attendance] reflect that.”

Adi Heyman is best-known in the Orthodox and modest fashion world for her since-shuttered blog Fabologie and by her nom de plume: The Fabologist. She started it in 2010, in what she claims is the first modest fashion blog, and rose to fame for her striking designer ensembles that happened to be modest; photographers at New York Fashion Week started taking note of her. Heyman’s Tuesday night outfit reflected her penchant for wearing trendy designers with a modest flair: a conceptual denim Balenciaga jacket, an undulating amethyst slip dress from Tibi and velvet ankle-tie Attico heels, topped with an unbelievably natural flaxen Zelda wig.

To understand Heyman’s enthusiasm for providing a platform for modest fashion, it’s important to understand where she came from. Born Christian in Texas, Heyman converted to Judaism as a teenager, along with her parents and three siblings. “My parents were always religious and they just found Judaism to be a better fit,” she said. “It was a slow process, but it was something we did as a family.”

As she evolved as a blogger, she realized that what the Orthodox fashion world needed was a place where they could gather and engage in the industry in a way that was meaningful to them. “Instead of looking at the industry to validate Jews in fashion, let’s look [at] community. And, if you’re good enough, you’ll have a spot.”

It’s why her upcoming relaunched adiheyman.com site (she briefly launched back in August but ended up taking it down, because she felt it “wasn’t ready”) will be a lot more engaging with open forums to encourage discussion and be a place for Orthodox fashion obsessives to gather. She will review fashion, but focus on Israeli designers. “It will be a lot more intellectualized,” she said.

“People feel like you have to sacrifice who you are and what matters to you,” said Elizabeth Savetsky, the Orthodox woman behind the popular blog Excessories Expert (she has 117,000 Instagram followers at press time), a panelist at the event. “Especially if you’re a Jewish person and you observe Shabbat or you observe modesty laws, and you feel like you can’t make it in the fashion industry because you will be competing with people who are willing to not do those things. And so I think to have a strong voice of representation saying that not only can you do it, but you could do it and kill it, is so amazing.”

Recognition of this void is also why Heyman decided to create Faith In Fashion. In Heyman’s mind, a panel discussion that weaves Judaism with what’s relevant in the fashion industry, such as tech and sustainability, is what’s lacking in the Orthodox fashion community. “Let’s do stuff like this and invest in a community that could hold up these people, not just [me],” she said.

Marketed by the Anelis Group, decorated by Birch Florals and catered by Heavenly Catering, the Faith In Fashion event, by all accounts, was a rousing success. The drinks were flowing and guests were inundated by trays and trays of hor d’oeuvres served by polished waiters, both of which was underscored by a feeling of camaraderie. Although Heyman seemed intent on highlighting all Jewish backgrounds, the crowd was overwhelmingly Orthodox and modest, and there was a palpable sense of excitement and energy that electrified the air.

“I love modest fashion and I think this is such an opportunity to really see leading women representing modest fashion in New York,” said attendee Niki Gavrilova.

For Shoshana Schorr, she came because women like Heyman, “show that frum fashion doesn’t have to be frumpy.”

Others came to support the Chabad at FIT. For Amy Glaun, “They were a huge part of my college experience. I would not have been the same without them.”

When asked if she plans on turning this event into an organization to cultivate and groom future talent, similar to the Council of Fashion Designers of America (CFDA), Heyman was coy at first. When pressed, she reluctantly agreed that Faith In Fashion was likely headed in that direction. “I feel like I have to be [the liaison between the industry and the Orthodox world],” she said. ”I just want to provide awareness, information.”

Like awareness and information about Hannah Lancry Sufrin, a panelist representing her fashion company, House of Lancry. Lancry Sufrin explained that as an Orthodox Jew who is modest, she wants women who care about modesty to feel amazing in her clothes. “I want women to feel empowered,” she said.

Heyman doesn’t know where she goes from here. “Since we’ve done all this, we’ve had a lot of people reach out that want to do other things,” she said. “This for me is kind of a litmus test for the needs of our community. We’ve had great outreach, we’ve sold out of this event (although we kept it small). I want to gauge where our community is at.”