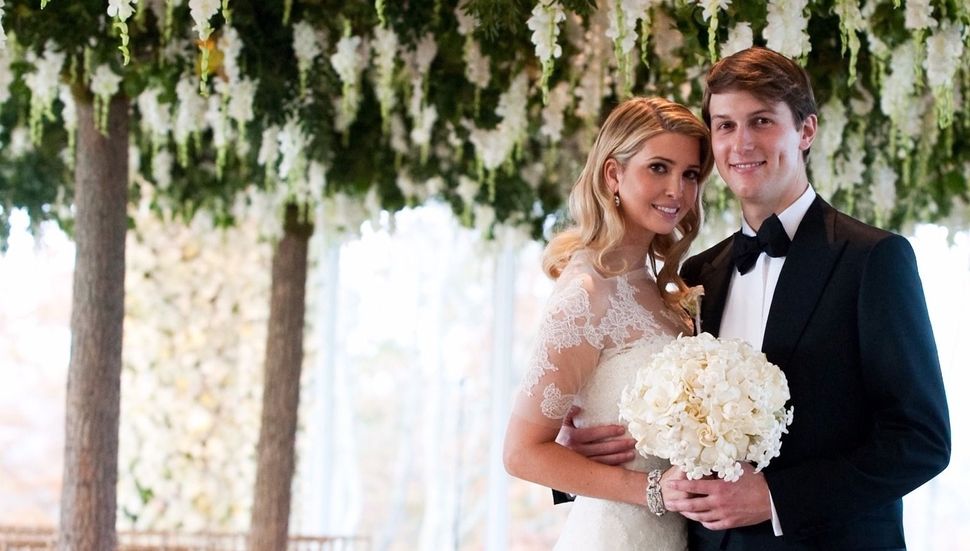 Ivanka Trump and Jared Kushner at their wedding. Image by Getty Images

In conversations with other parents, we often discuss what we would say if our children told us they were gay or transgender. It’s possible that I get this question more often than other people because I am an out-and-proud conservative living in the liberal enclave of Park Slope, Brooklyn.

Having rarely come across a conservative, people often expect me to say that I wouldn’t accept my gay child or that I would shun my transgender one.

The truth is that I have always been a supporter of gay marriage; it always seemed to me that the conservative position should be to encourage commitments between people. Marriage is a stabilizing force, why wouldn’t we want more stable people? As for transgender people, I have had close friends who are transgender. It isn’t an easy life, but I would support my children in any way I could if they told me they didn’t feel they were born into the right body.

But what my Jewish friends often find much more shocking is that while I wouldn’t be dismayed if my child were to come out as gay, I would find it much more troubling if my child told me they were marrying out of the Jewish faith.

That’s right. If someday my child were to tell me he or she was gay or transgender, I would say something similar to what I would say to his or her straight siblings: “Don’t think this frees you from producing Jewish grandchildren.”

Yes, my main life guidance for my children will be to encourage them to have children themselves and to specifically have Jewish children.

When I say this, my non-Jewish friends are nonplussed. Many of them have similar hopes for their children in their own religions.

But I get a shocked reaction from other Jews, as if I had just said I would disown my gay child. “Isn’t that…racist?” they ask in hushed voices.

Of course race is completely irrelevant here. There are Jews of all races and my child is free to choose any one of them to marry and reproduce with. I’m also completely in support of their future spouse converting. I am not looking for pure Jewish blood (that’s nonsense); I’m looking for my children to have a family structure that follows Jewish traditions.

After millennia of suffering for these very traditions, I can’t imagine letting go of them so easily.

In the Stalinist 1930’s, my grandmother’s father was sent to the gulag, where he died. When World War II began, his widow grabbed her children from Belarus and ran east to Uzbekistan. The majority of the Jews who stayed in her town were killed. My father tells the story that “All the Jews in her town were praying for God to save them but she had believed in God once already and her husband had been killed for no reason.” She would go on to lose her two sons during the war.

And yet my grandmother and her sister, who was a newlywed when her husband was killed in the war and never remarried, kept up the traditions. They lit candles on Shabbat. They celebrated holidays. Jewishness had cost them everything and yet they persevered. How could I let my children disregard this legacy?

Here we are, their descendents, American Jews, the luckiest Jews in history. When we travel with our children, we often seek out the Jewish areas to see how they lived. In Venice, we go to look at the gates that the city locked at night to keep the Jews inside. In Lisbon and Barcelona, we take our children to see the local Jewish ghettos, so that they recognize the painful history that precedes us.

But in America, so far, our Jewishness has not led to hardship. We aren’t denied certain jobs, we aren’t limited to certain neighborhoods or cities. We are allowed to worship freely. We are not assaulted for being Jewish while our neighbors look the other way. We are free, same as other Americans, and for the first time in quite a long time, we are safe. Even the neo-Nazis marching in Charlottesville chanting “Jews will not replace us” don’t change that. They are marginal in number and more mockable than scary; they’ve been replaced a long time ago.

My Jewish children don’t have to worry about hiding who they are or worry about being shunned or killed for being Jewish. The idea that they will take all of that opportunity and let it end with them, without ever having children who get to be openly Jewish as they are, is a tragedy, in my mind.

I think sometimes of George Washington and how unfortunate it is that he never had any children. Here he was, building this new country, fighting for it, losing friends for it, and he never got to have his own progeny enjoy it. He raised Martha Washington’s grandchildren as his own but I’ve always found it deeply sad the fact that no one from George Washington’s lineage got to experience the America he bequeathed us.

I have absolutely no judgment for Jews who have intermarried. I’m a romantic about love and I support it wherever it exists. But choices are made and I hope to help my children make different ones. If they don’t, I will love them anyway. But I will do my best to encourage a Jewish family outcome.

Being Jewish means walking around with the weight of history on you and it means that a culture of people depend on you to continue it. My children who get to be so easily Jewish owe it to the people who came before them. History’s luckiest Jews owe it to those who weren’t so lucky.

After the shock of my admission, other Jews often confide in me that they too would like their children to marry Jews and have children.

Of course they do. Why are we so afraid to say something so obvious out loud? How will our children know how important this is if we are too afraid to articulate these deep values aloud?

There is a crisis of intermarriage in our community, and it stems from our silence.