What’s Your Hanukkah Menorah Worth? 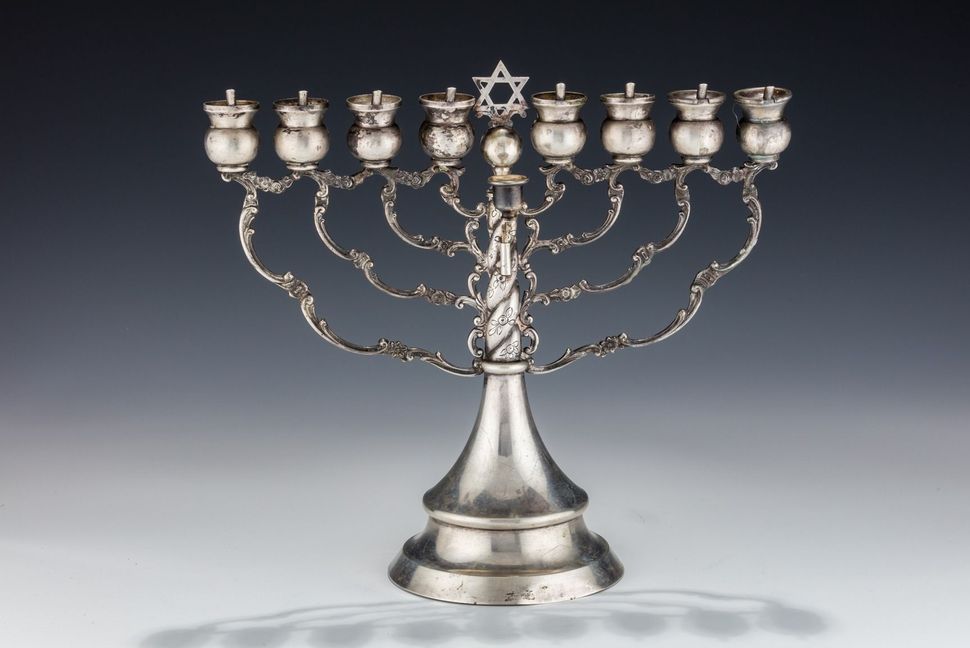 Image by J. Greenstein and Co.

Hanukkah menorahs and lamps can be valuable — depending on their origin, material, size and decoration.

Since the majority European Jews was very poor, not everyone owned their own menorah. When they did, it was usually made of brass or pewter — less expensive metals than silver. Silver lamps are often very ornately decorated with animals, organic designs and sometimes figures such as an ancient Maccabees. Like any other form of Judaica, the older, larger and more ornate examples fetch bigger numbers at auction. A Hanukkah lamp usually has a back plate and can be mounted on the wall or can also be freestanding. Hanukkah lamps usually have some sort of reflective nature to the back plate as well as deeply ornate decoration. 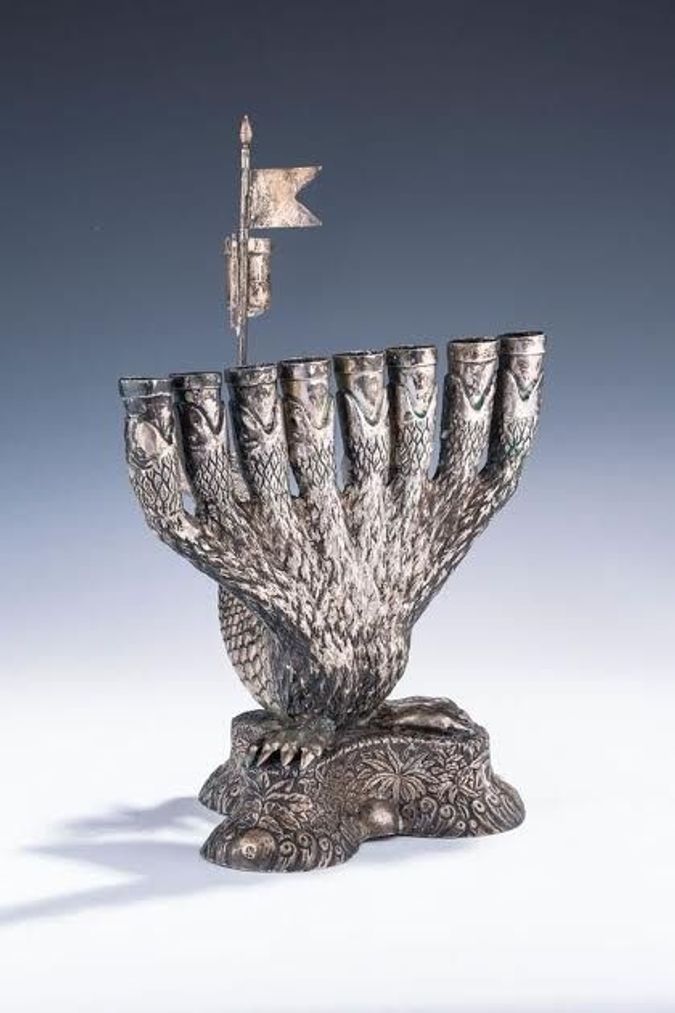 A $100,000 menorah, in the shape of the mythical hydra. Made in Altenberg, Germany in 1880s. From the collection of Michael Steinhardt. Image by J. Greenstein and Co.

While Ashkenazic Jewish law mandates that a menorah or Hanukkah lamp must have eight even lights in a straight row, some Sephardic communities allow a semi-circle or round design. As long as there are those eight even lights, all other designs and modifications to the menorah are, for the most part, acceptable. This allowed for extreme artistic freedom: One can see such traditional decorations on Eastern European menorahs such as stags, palm trees, the Decalogue, crowns, snakes and other repetitive designs.

We also often see nationalistic designs, such as a double-headed eagle added to these pieces. Most Galician and Eastern European models from the 18th- and 19th-centuries are usually pretty folksy in style. Stylized lions are the principle motif. This especially holds true for wall-style Hanukkah lamps. They are mostly handmade until the third quarter of the 19th century, when machine-made mass production in Warsaw primarily took over. Makers like Shmuel Skarlat, Ludwig Nast, Izaak Szekman and many others had shops in the commercial town of Warsaw and often copied each other’s designs. 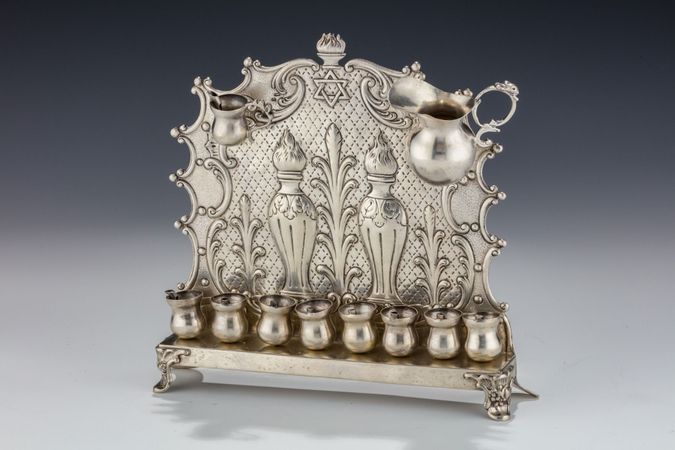 This period, from the second half of the 19th century all the way until WWII, saw massive repetition in style and motif. Palm trees, lions, birds and grapevines were some of the more popular decorations. Many of these lamps survived, as when the mass immigration to America took place from the last quarter of the 19th century all the way until WWI, when the immigrants took their Judaica as well as their other possessions to America and other countries. As generations pass, we have seen many of these pieces come to market. Anything left in Europe is assumed to have been destroyed or stolen by Hitler and his accomplices.

Another popular style of Hanukkah lamp that we often see at auction is the “Baal Shem Tov”- style. Tradition holds that the Hanukkah lamp the founder of Hasidism used was made completely of filigree silver. There are varieties of this lamp – with the larger, more ornate models decorated with small silver animals achieving the highest prices. (There is no direct proof that this model was actually used by the Baal Shem Tov, however, the legacy has survived nearly 300 years with all collectors using the term.) German Hanukkah lamps of the early periods (1650 – 1825 or so) are usually heavily decorated and quite rare. They are usually much finer in craftsmanship and a lot less folksy than lamps made in Eastern Europe from the same time period. Human figures are sometimes used to decorate the lamps or as props for holding the servant lamp or oil jugs. As there has been very few on the market over the last 30 years these usually sell in the $200,000 – $600,000 range, with the earlier, more ornate ones bringing numbers closer to the higher estimate.

Toward the end of the 19th century, German silversmiths also started mass producing these lamps, often in the style of hand made earlier models. The most popular one that we see is the “Lions” model, where each oil holder is shaped like a sitting lion, with a wick holder extending from its mouth. The later the model, the more it has been re-casted. With this comes the dulling of the details of the lions and other decoration and significantly brings down the value. 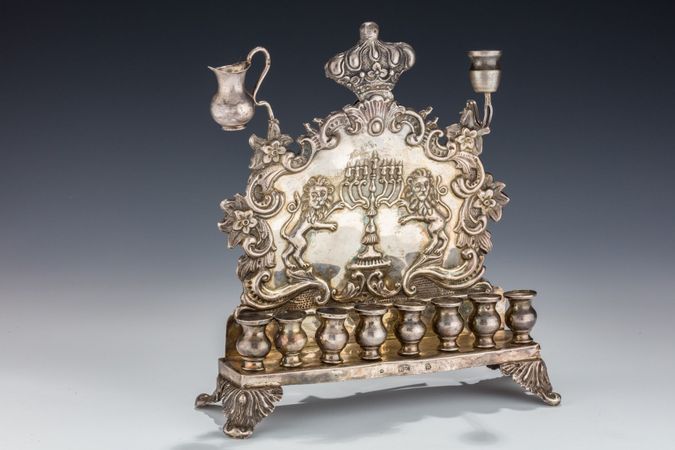 A silver Hanukkah Lamp. Warsaw, 1879. On four decorative feet. With eight oil holders and a back plate chased with two lions flanking a Temple style menorah. 9” tall. Image by J. Greenstein and Co.

As we approach the 20th century, we find most lamps were machine crafted and decorated with artistic designs and movements from whichever country and time period of manufacture. One can expect that a silver menorah from Germany from the time period of 1910-1920 would most likely be in Art Deco motif. In addition, one would expect that a menorah from somewhat earlier in the same region would be in Rococo.

Large, ornate silver menorahs often fetch top dollar both in private sale and at auction because of the rarity of combined with aesthetics as well as decorative value. The larger and more ornate the piece, the more the collector values it, the more top dollar is paid.

So what’s your menorah worth?

Email a picture to Jonathan@Jgreenstein.com.

J. Greenstein and Co.’s major menorah auction this year will be on December 21.

Jonathan Greenstein is the founder, president and expert-in-charge at J Greenstein and Company, Inc. in Cedarhurst, New York. It is a boutique auction house directed by Abe Kugielsky, a second-generation Judaica dealer that specializes in antique Jewish ritual objects as well as Jewish-themed art.

What’s Your Hanukkah Menorah Worth?