How to Honeymoon in Israel — Yes, Israel 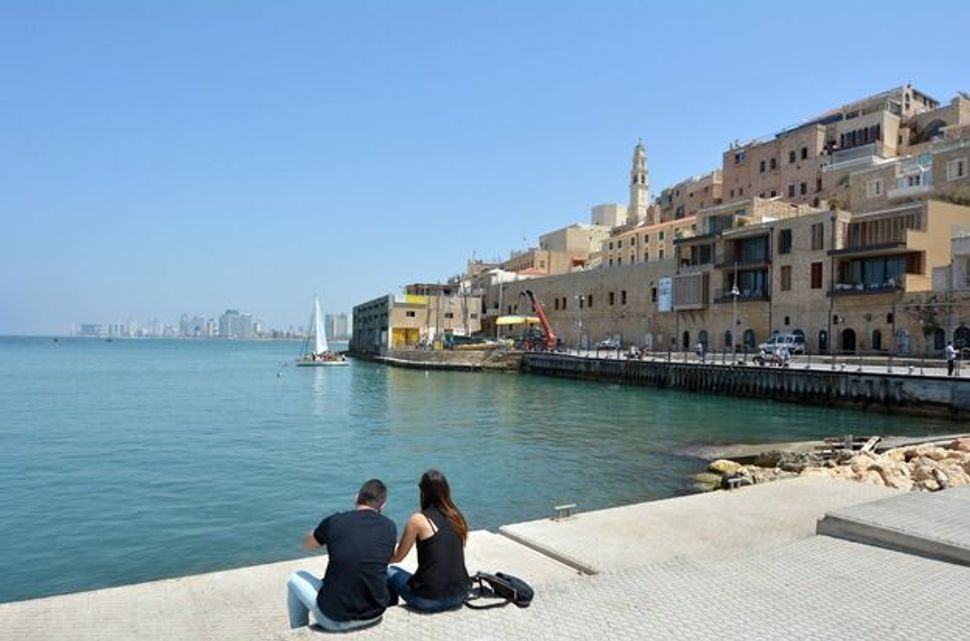 Honeymooners enjoy the view of Jaffa. Image by chameleonseye

When thinking of romantic honeymoon destinations, Israel may not be the first choice that comes to mind. But for Stephanie and Daniel Perri of Houston, Texas, Jerusalem was the perfect choice.

“Daniel isn’t Jewish, and I am,” Stephanie says. “We went to both the Western Wall and the Church of the Holy Sepulchre, and I thought it was cool being in the place where both of our religions had begun.”

Israel was a far popular honeymoon choice for American Jewish newlyweds in decades past than it is today. Visiting the holy land for the first time together used to be something of a rite of passage before settling down and creating a Jewish home.

But in recent years, with Birthright’s popularity and the proliferation of cheaper air travel, more newlyweds than ever have already visited Israel well before tying the knot. In fact, the number of North Americans traveling to Israel as tourists increased by 20 percent in 2017 alone, according to the Israel’s tourism bureau.

While some newlyweds shy away from Israel as a honeymoon destination because of the perceived emotional or spiritual baggage that comes along with a visit there, a number of Israeli tour agencies and organizations are selling the point that it’s a great destination to provide a springboard for discussions of identity, religion and values —while also allowing easy access to every kind of terrain, from desert to beach to skiing.

“Israel is one of the most interesting places on earth – it’s for those who want to add some substance to their honeymoon,” says Gad Cohen, from Galilee Travel, based in Bethesda, Maryland. “It’s not a typical honeymoon destination; not your run-of-the-mill Cabo or Bali. It’s a special place for cultural and spiritual explorers.”

The latest crop of hip boutique hotels in Israel is luring many couples in. The Norman Hotel in Tel Aviv has the elite status of being a Mr. and Mrs. Smith hotel (a company offering stylish, luxury boutique hotels to romantics around the world, popular with even the most discerning of young professionals). The Brown Hotel, also in Tel Aviv, markets itself as an urban hotel for lifestyle-driven individuals, offering film screenings, DJ nights, a spa and a rooftop sundeck, complete with jacuzzis.

For honeymooners looking for a more peaceful experience, the Beresheet Hotel, on the edge of the Ramon Crater in the middle of the desert, offers a real respite from city life. There’s an infinity pool set into the crater and uninterrupted desert views as far as the eye can see. 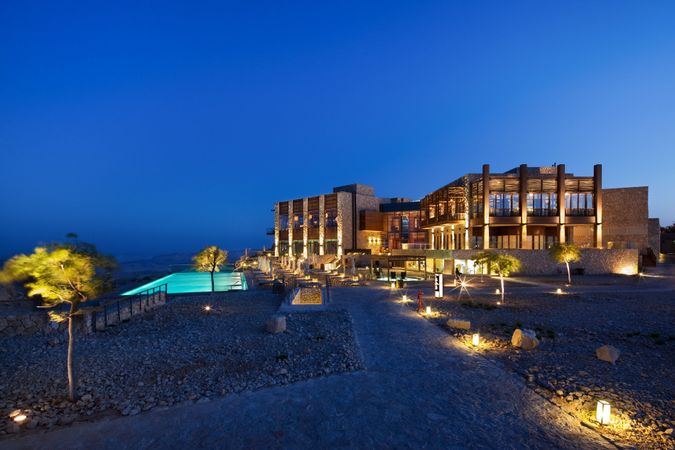 View of Beresheet Hotel in the desert. Image by Assaf Pinchuk

“With honeymoons, people tend to want either an adventure or relaxation, and Israel actually does a bit of both,” says Karen Cinnamon, founder and editor of the popular Jewish wedding blog, Smashing the Glass. “It really has everything in a small area – you can cover the whole country in a matter of hours. It’s a great honeymoon destination if you want a bit of everything: Desert nights, relaxing on the beach, historical places.”

Some honeymooners are heading to Israel with not just their honey, but with a whole group of honeys. A kind of Birthright-esque trip for those who’ve already come of age, Honeymoon Israel is a Jewish organization that has, to date, run 47 subsidized “honeymoon” trips for 900 couples from 14 North American cities: the trip costs about $1,800 per couple, all-inclusive. 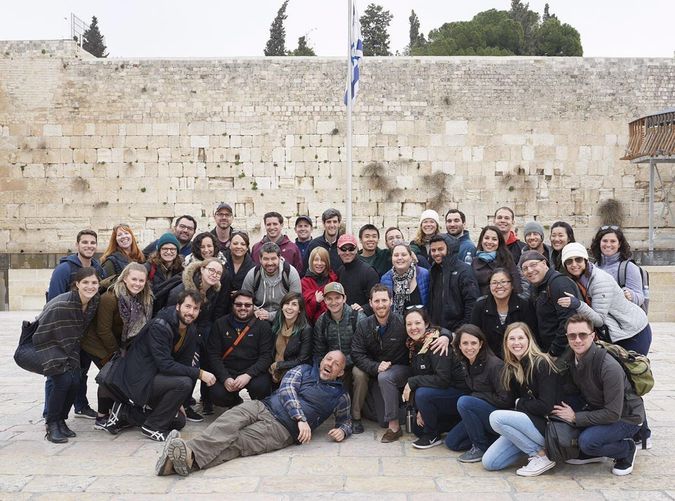 A group tours the Western Wall as part of a Honeymoon Israel trip.

Trips are organized with couples from the same area, so that new friendships can be maintained more easily once the honeymoon is over. “Couples starting off life together don’t usually have other couple friends who are also navigating issues of family identity,” says Avi Rubel, Honeymoon Israel’s co-CEO. “Honeymoon Israel provides an inclusive and empowering ‘way in’ to Jewish life.”

A group honeymoon experience still allows plenty of room for romance: “Honeymoon Israel trips include built-in time for every individual couple to get away from the group and have alone time,” Avi says. “We have at least four couples applying for every spot on Honeymoon Israel.”

The subsidy (made possible because of generous funding given to Honeymoon Israel by both local and national parties), helps – but the real attraction is the group’s embrace of interfaith couples. Honeymoon Israel actively encourages applications from couples where only one partner is Jewish. “Honeymoon Israel supports (all) couples in their own open-ended exploration of Judaism so they can build meaningful Jewish community locally and incorporate Jewish values and traditions into their families,” Avi says.

Whether a honeymooning couple is heading to Israel alone or as part of an organized tour – they will always discover something new about the place – or themselves.

Mamilla Hotel, Jerusalem: One of Israel’s most lauded luxury hotels. Dine in the world- famous Rooftop restaurant, visit the on- site winery, and indulge in the spa and wellness classes. 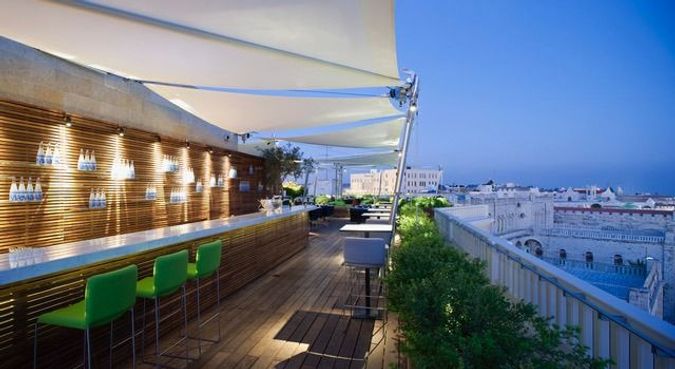 The Norman Hotel, Tel Aviv: Boutique hotel chic in a restored 1920’s Bauhouse building, with swoon-worthy curves and a sumptuous pool on the roof.

Catit, Tel Aviv: Meir Adoni’s intimate, award-winning gourmet restaurant for the gastronomically adventurous palate. With only 22 seats, reservations are a must.

Goats in the Wind, Galilee: Eat on Turkish carpets and cushions outside, nestled in a suoukot or beneath a carob tree. Dairy and organic food fresh from the on-site farm.

Rooftop,Jerusalem: Enjoy stunning views of the Old City while dining on sumptuous sofas. A celebrity and dignitary favorite.

Take a walk (or a hike) in Mount Carmel National Park, Israel’s biggest park, where evergreen trees abound as far as the eye can see. Follow up your walk in the forest with a visit to Mount Carmel Spafor some hard- earned pampering. 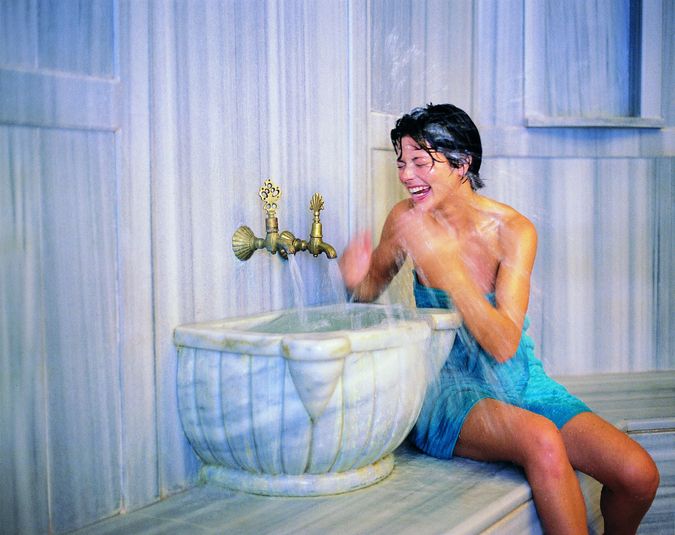 Turkish hamam at the Carmel Forest Resort and Spa.

Take a food tour to explore Israel’s multitude of edible delights under the guidance of a knowledgeable native. Delicious Israel offers walking and bus tours covering every aspect of Israel’s booming gastronomic scene.

Spend the day (or longer) at the Sea Zen resort in Galilee, where you can enjoy thermal mineral baths, take a 4 x 4 into the desert or go on a nighttime safari, or partake in a visit to a winery or olive press.

Amy Schreibman Walter is a lifestyle writer and teacher living in London. Follow her on Twitter @amyswalter or find her online at www.amyschreibmanwalter.com

How to Honeymoon in Israel — Yes, Israel